Hackers hijacked Taylor Swift's Twitter and Instagram accounts today, threatening to release naked pictures of the popular singer. Swift has bitten back, announcing on her Twitter that there are no 'nudes' to be had and the only way they could 'uncover' anything would be to use Photoshop. 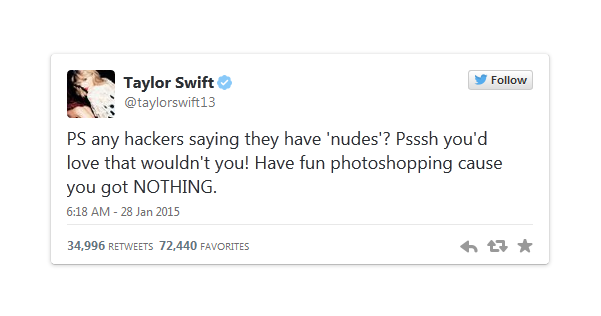 After stating that her Twitter had been compromised though Tumblr, she later announced that her Instagram had also fallen victim. People are questioning if the superstar has been using the same password for multiple social media accounts, as it's uncommon to see a small amount of accounts compromised like this - usually its a singular service taken or its everything in one go.

The hacker-made tweets have now been deleted from her account and everything has gone back to normal. Seemingly Swift has been able to shake it off quite well - laughing in the face of the hackers.

Why worry when you've got nothing to hide? Do you guys remember this fiasco?