All the latest Hacking, Security & Privacy news with plenty of coverage on new data breaches and leaks, new hacks, ways to protect yourself online & plenty more.

The US airline CommuteAir reportedly left a federal "No Fly List" on an unsecured server that was then accessed by a Swiss hacker. 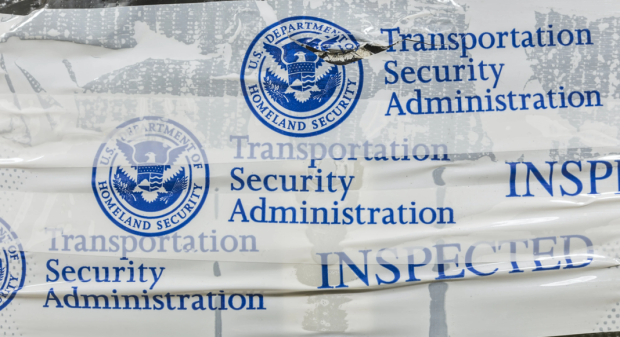 The exclusive report comes from The Daily Dot that claims US airline CommuteAir left an unsecured server open that contained a large quantity of sensitive information. This server was accessed by a Swiss hacker that goes by "maia arson crimew" who wrote a blog post titled "how to completely own an airline in 3 easy steps," where they explained that they stumbled across the sensitive server by accident and through boredom.

Essentially, the hackers were just looking around through a search engine called Shodan when they discovered the server and a file titled "NoFly.csv". The file was opened, and the hackers discovered a 2019 version of a federal No Fly list that includes first and last names as well as dates of birth. The Daily Dot reports the list contained the names and aliases of many high-profile people, such as the recently-freed Russian arms dealer Viktor Bout and his 16 aliases.

Malware in the form of an advertisement in Google or other search engine results is not uncommon. We recently reported on a case involving a shady ad impersonating AMD for a user simply looking to update their graphics driver. 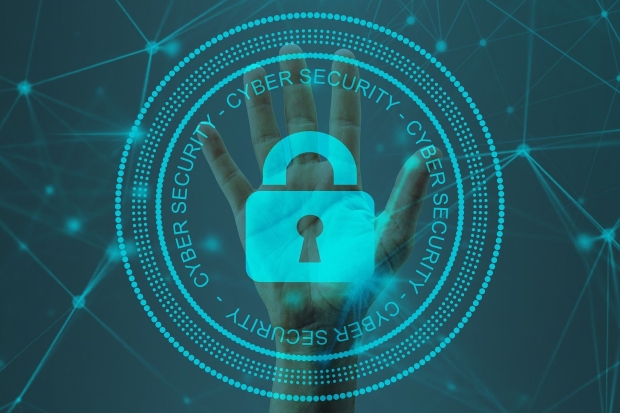 As spotted by a user on the Linus Tech Tips forums, the FBI posted a new Public Service Announcement (PSA) earlier this month, explicitly calling out this issue.

Continue reading: The FBI recommends using an adblocker to protect you from cyber criminals (full post)

Norton announces thousands of its customer accounts have been hacked

Norton LifeLock, a very well-known provider of identity protection and cybersecurity services, recently revealed in an announcement that thousands of its customers had their accounts compromised. 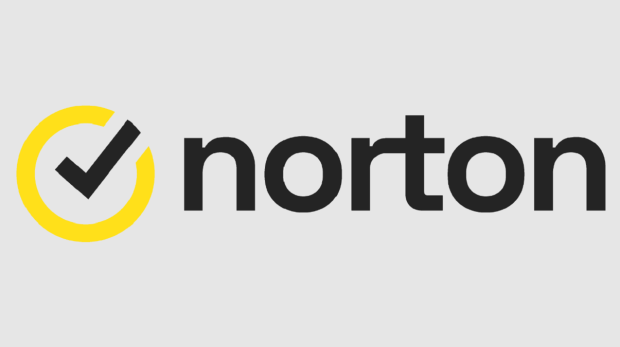 The parent company of Norton LifeLock, Gen Digital, states that the likely cause of the hack was a "credential stuffing" attack, which is when previously exposed or breached credentials of accounts are used to break into other accounts on different sites and services that have the same passwords. The company notes that it detected a "large volume" of failed logins to customer accounts on December 12, which led them to discover that the intruders had compromised accounts dating back to December 1.

The company sent notices to about 6,450 Norton customers whose accounts were affected by the breach. In the data breach notice, Gen Digital states that the unauthorized third party may have viewed customers' first names, last names, phone numbers, and mailing addresses. The company also said that it could not rule out that the intruders also accessed some customers' saved passwords.

A few days ago, on the popular PCMR subreddit, a user warned others that when he searched for "amd driver" the top result was an advertisement for a malicious website claiming to offer precisely that. 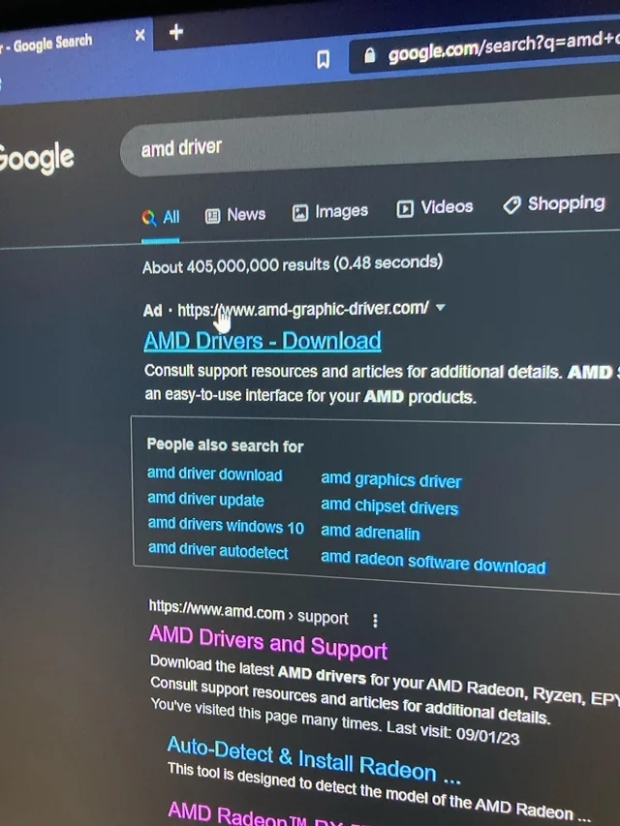 Of course, this wasn't a legitimate search result, but appearing above their search results, it was an ad made to look like the real thing. In our testing, it seems like the search result and site have both been removed, which is good to see.

It wasn't until recently that I discovered Chrome has an in-built feature to help protect your kids (and anyone, actually) while browsing the web with Google's popular web browser. A recent Facebook post from the Google Chrome page alerted me to its "Enhanced Protection" security mode and family DNS feature, which we dive into below. 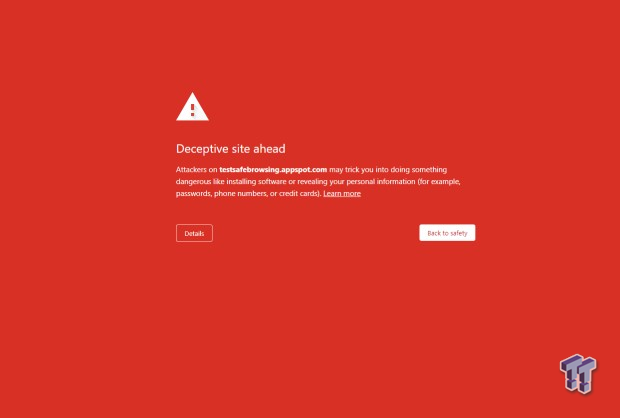 In the simplest terms, when turned on, this feature proactively monitors the user's behavior in Chrome and blocks bad websites, downloads, and extensions before they can cause a problem on your device. For example, you or your child might be about to enter a harmful website that attempts to steal important information. Chrome blocks the website and presents a very obvious red screen warning you.

A little discussion with your kids would go a long way, alerting them if they see this obvious red screen, reminding them it's a bad site and they shouldn't visit it. Chrome can also scan any downloads before the files are executed for malware. Privacy advocates may not be impressed by the feature since some of your data and activity need to be processed by Google. Still, it should be a suitable compromise for most if security concerns you. Considering this free feature doesn't slow down your devices as external security monitoring software and apps can, it's well worth it.

Continue reading: An easy way to protect your kids while browsing the net with Google Chrome (full post)

Hackers target US public airports sparking response from US officials

A group of hackers that are suspected of being Russian targeted more than a dozen US airport websites on Monday. 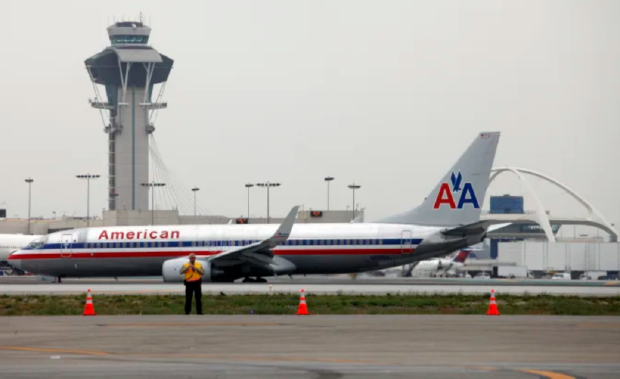 According to reports from ABC News and several other publications, a group of hackers believed to be located in Russia targeted fourteen US airport websites on Monday, with some of the websites being LaGuardia, O'Hare and LAX. The hack brought down the website for approximately fifteen minutes and sparked a response from a US government official that stated air traffic control, along with internal airport communications and other critical operations, weren't impacted by the hack.

However, travelers that were interested in wait times or any other information found on the website would have experienced an inconvenience. Furthermore, a spokesperson for LAX said that the attack didn't compromise internal airport systems and that there were no operational disruptions to report.

In what appears to be the largest education breach in the last couple of years, a large amount of student data has been released by a group of hackers that infiltrated a school system last month.

The hacking group named Vice Society claimed responsibility for the ransomware attack on Los Angeles Unified School District (LAUSD), which resulted in the bad actors gaining access to emails, computer systems, applications, and more. Reports indicate that hundreds of gigabytes of student data was stolen and that the hacker group demanded an undisclosed amount of money for the return of the data. Unfortunately, as expected by U.S. authorities, the data was released online as the October 4 deadline was not met.

The hacking collective Anonymous has taken to YouTube to announce that its declaring war against the creators of one of the most popular NFT projects, the Bored Ape Yacht Club.

Anonymous released the above video onto its YouTube channel on September 27, and in the almost 9-minute long video, the hacking collective accuses the creators of the Bored Ape Yacht Club NFT project, Yuga Labs, of including "esoteric" Nazi, white supremacist, and pedophilic symbolism throughout its designs. These accusations aren't necessarily surprising, as Yuga Labs has previously denied any intentional inclusion of artistry that represents the aforementioned groups or ideologies.

Futurism reports that the accusations originally began with digital artist Ryder Ripps who published a website that connected symbols within some of the Bored Ape Yacht Club designs with Nazi symbolism. These allegations were seemingly picked up by Anonymous, which the hacking collective states in the above video it has found proof "beyond a shadow of a doubt" that Yuga Labs intentionally includes elusive Nazi symbolism within its digital art projects.

Hackers have infiltrated both Apple News and the business magazine Fast Company to send out an extremely offensive message to Apple News users.

The message, which has been reposted online in a censored and uncensored format, was confirmed to be a result of a hack, which was verified by both Apple News and Fast Company via Twitter. Apple News wrote on Twitter that an "incredibly offensive alert was sent by Fast Company", which was hacked, and that Apple has since disabled their channel. Fast Company wrote on Twitter that its Apple News account became compromised on Tuesday evening and that two "obscene and racist push notifications were sent about a minute apart".

Following up in more tweets, Fast Company clarified that its content management system (CMS) was hacked on Tuesday evening and which gave the hackers access to Fast Company's Apple News push notifications. The business magazine has stated that it launched an investigation into the situation and that its temporarily shut down FastCompany.com until the situation is completely resolved.

Anonymous claims it has hacked the Iranian government

As part of the hacking collective Anonymous' operation against the Iranian government, it has claimed it has hacked the National Bank of Iran.

More specifically, one of the websites that was targeted by Anonymous was responsible for publishing government news and interviews with Iranian officials, and according to a social media account affiliated with the Anonymous hacking collective, "All database has been deleted". The hacking happened amid large-scale anti-government protests erupting in central Tehran, Iran's capital, and many Iranian cities and towns. These protests began on Friday last week when 22-year-old Kurdish woman Mahsa Amini who was wounded and arrested a week ago by the Islamic Republic's hijab police.