In the middle of the Asetek Holdings Inc. Vs. CoolIT Systems legal battle over a patent infringement associated with closed-loop liquid cooling units, Corsair got stuck in the eye of the storm as it had few models made by CoolIT. Due to the issue at hand, the court eventually decided to keep a motion for partial summary judgement involving CoolIT OEM Corsair AIO units. What was not known until now is that the partial motion summary judgement has concluded in Corsair's favour. 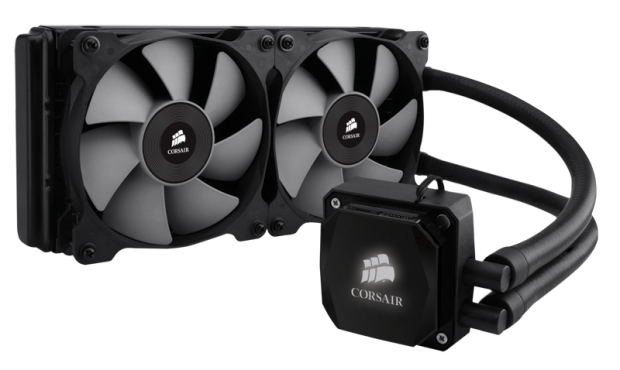 In August 2012, Asetek signed up a licensing agreement with Corsair for AIO liquid cooling units. In the agreement, Asetek gave a non-transferable, non-assignable, non-exclusive license with no sub-license clause. CoolIT defended itself saying that Asetek cannot sue them for infringement of US patents no '362 and '762 because CoolIT was making the so-called 'infringing products' for Corsair on their request. Asetek argued, pointing out that Corsair actually purchased 'off-the-shelf' CoolIT liquid cooling hardware in its ready-made form. The questioned models from Corsair were the H60, H80i and the H100i.

The California court however was skeptical of Asetek's claims that these were off-the-shelf models. Though, initially CoolIT approached Corsair of a retail channel partnership collaboration, Corsair wanted to pick a particular combination of radiators and fans to have a different product. Many specifications were changed, such as lengths of the tubes, the thickness of the radiator and even the size of the fans bundled with these AIO coolers. For example, Corsair H60 changed about 35% of the components for H60, whereas H80i and H100i had 46% and 46% changes. CoolIT also said that the 3/8 rubber tubing, barbs and radiators were specifically made for Corsair, and was not used in its brand or with others.

Asetek tried to keep its stand against CoolIT, stressing that CoolIT's pump head used in these AIO units is the fundamental and most significant feature of CoolIT's liquid Cooling system. It added that CoolIT's pump head is a ready-made component and therefore is not made as per Corsair's requirements. Asetek emphasized that the pump head is the 'heart of the invention', where they claimed that CoolIT effectively infringed on. It later said that the rest of the custom-ordered changes are merely peripherals of the entire unit.

In the end, the partial judgement went in CoolIT's favour. While it didn't clear the legal issue between two manufacturers, Corsair is in the clear. As per the licensing agreement, Corsair is entitled to have a custom-made liquid cooling solution, and that the units that CoolIT systems made specifically for Corsair was not a 'ready-made' unit as the level of customizations deemed those models to be covered under the 'have made' clause mentioned in the licensing agreement.

Asetek's patent infringement cases were also filed against Coolermaster and Swiftech. Swiftech preferred to take its H220 and H320 AIO CPU coolers from the U.S. retail shelves. Later Swiftech co-designed the semi-DIY Glacer 240L cooler with Coolermaster. Now that Asetek has a water cooling patent, one can't help but wonder if the company plans to do the same.