Life as a submariner is full of restrictions including the ban on cellular phones, and electronic devices such as iPads. Fortunately the US Navy understands that submariners may not see land or even the surface of the ocean for weeks on end, and that reading is one of the more popular ways to pass the time. Unfortunately an iPad, Kindle, or other tablet-style device has been deemed too dangerous for use on US submarines. 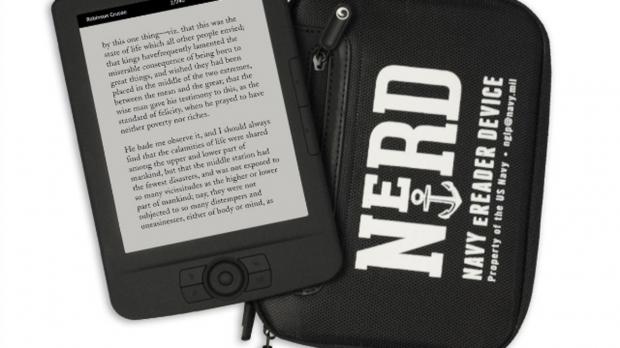 To fix this issue, the US Navy has designed its own e-reader that only features the capability to function as an e-reader. The new Navy eReader Device or NeRD for short is an e-ink based reader that is quite similar to a Kindle except for the fact that it does not have any internet connectivity, removable storage, and no way to add or delete any data that it stores. This is mainly due to the fact that a stray Wi-Fi or Cellular signal emanating from the device could give the entire sub's position away to the enemy. Additionally, the absence of a removable storage device prevents any sailor from attempting to steal any sensitive data from the sub's network.

NeRD features a library of 300 books that have been chosen and pre-populated by the Navy and ensures that all of the reading material is Navy approved. The library includes modern fiction like Tom Clancy and James Patterson, who are popular amongst sailor, as well as a wealth of non-fiction naval and military history. At the moment, the Navy has only produced 365 NeRDs but says it will ramp up production in the near future.