A rare Quake Arcade Tournament Edition cabinet from LAZER-TRON tipped up on EBay this past week. The seller claims it's one of only twenty made. This is the first one we've ever seen or heard of. 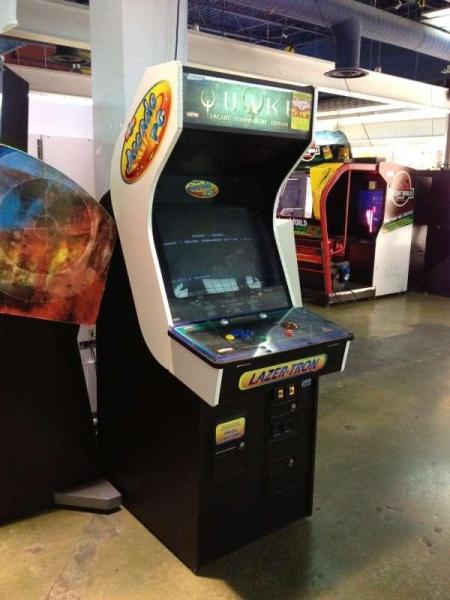 Legend has it that only twenty of these prototypes were manufactured. When the game was first introduced, Lazer-Tron was bought out and due to problems with the contracted programmer, the game was never further developed. This is one of the 20 prototypes! You will likely never again have an opportunity to purchase a game like this!

The classic PC shooting game has been adapted for tournament play in the arcade. This prototype features modified deathmatch levels and a special custom weapon. Machines may be linked to provide competitive play. The game is a direct conversion from the PC game, but with a few changes. The monsters may drop an occasional prize pack when killed. The machine contains a prize printer that would print out a special ticket reward, presumably much like a redemption machine. The game is powered by a complete Pentium PC inside the game. A keyboard and mouse can be found immediately below the control panel (not accessible by the player, however). The PC contains a Quantum 3D video card used to display the game's graphics. There are a number of settings that affect options not available in the original PC version of the game. At least two cabinets can be linked together for deathmatch competitions. 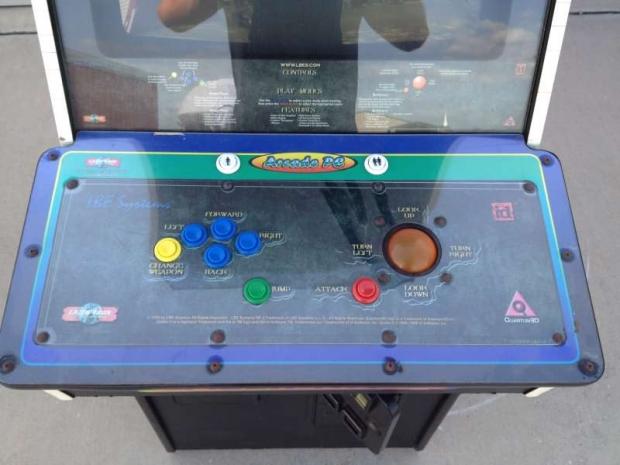 While researching this amazing find we managed to find another, 1 of 20 machines, this time with black trim instead of white. Both are priced near the $5000 mark and both in Texas. The images of each show they are not the same machine. 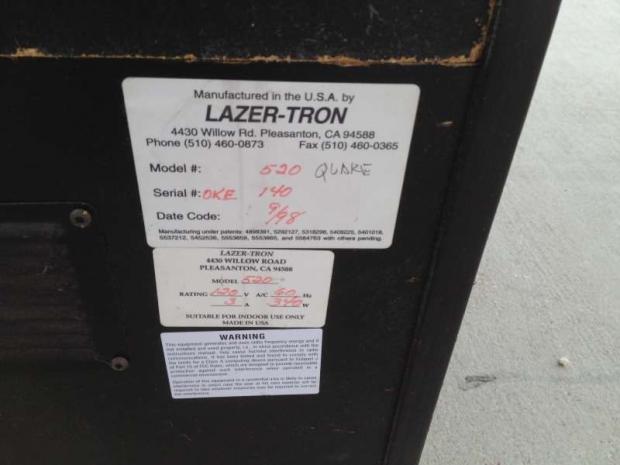 A third source helped us sort out the details. While very few prototype systems were built, a number of conversion kits shipped to commercial arcade businesses. It appears the cabinet on EBay is the real deal and one of the rarest arcade games ever.

Many are not even aware of the existence of such a thing and many don't even believe there ever was a special edition of QUAKE specifically made for commercial Arcade play.

The game was housed in a full sized upright arcade cabinet with a 27" 640x480 VGA display screen and a custom Trackball controller setup with 7 separate action buttons. It ran on a custom PC known as the Quantum3D Quicksilver Arcade PC. While that may sound impressive, this was 1998 and in reality it was only a 266 MHz Pentium II running under Windows 95!! However, with its custom video card setup it was pretty high-end for the time... especially in an Arcade cabinet. The setup also contained a proprietary I/O card known as the Quantum3D Game Control Interface or GCI.

This game is noted (on KLOV and other lists) as being one of the RAREST Arcade games ever created. Hence, there is a large amount of people that believe this is some kind of hoax and that it NEVER existed, or that it never made it past the prototyping stage.

The rumour also claims that there were only 20 working cabinets ever manufactured. However, this appears to be completely false in that there are countless accounts of this game having been seen and played all over North America over the years. What this rumour does NOT take into account is that the game was actually marketed for the most part as a RETRO CONVERSION KIT for commercial arcade owners who already were in possession of useable cabinets and parts to complete a Quake Arcade Tournament Edition installation.

I believe the reason that the rumour began is that the Laser-Tron partnership (see posts on custom cabinet below) was in fact VERY SHORT LIVED. What many failed to realize though is that the Laser-Tron fully complete cabinet ($7,500 in 1998 dollars) was only 1 of 3 ways that the game was being marketed to arcade owners. Yes, the white Lazer-Tron cabinet is in fact very rare, but the game itself actually got out there, mainly as a retro conversion kit from LBE Systems & Opus Entertainment. However, given that we are now talking about 1998, it might as well have been a lifetime ago,.... and memories fade..... and cabinets and original parts end up crushed, in landfills, or gathering layers of dust in basements and storage units.

Taking an educated guess, I think that probably a couple hundred of these units (in CONVERSION KIT form) made it out across North America back in the day. So, YES it is STILL a very rare Arcade game... whether the real number is 20 or 200. 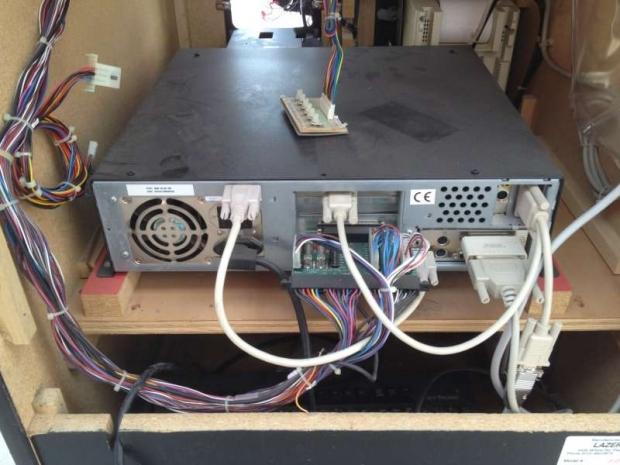 Highly collectible? Investment value? Too bad I don't have room for it.