Battlefield 4's upcoming expansion pack 'Dragon's Teeth' includes a two-handed ballistic shield, according to a GDC talk that was given by an EA DICE animator. The team was hoping to see gamers use the ballistic shield in the game, while shooting from behind it with various hand guns. 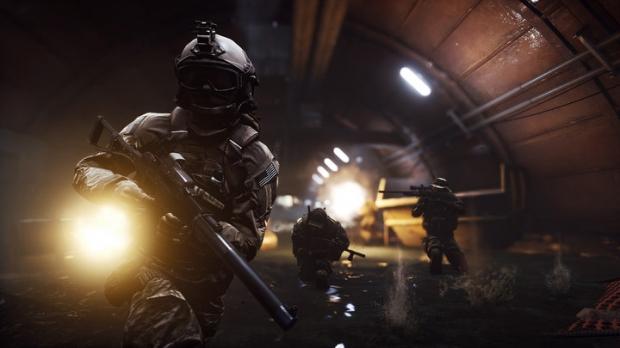 But, the team realized that the best way to deliver the bullet-stopping shield into the game was to make it two-handed, to provide teammates with a moveable piece of cover - something you can shoot with while using. The ballistic shield will be included with the Dragon's Teeth expansion that is expected to drop sometime in the summer.

There's not much known about the upcoming Dragon's Teeth, but it will be centered around urban warfare - and the awesome new ballistic shield. During the animation bootcamp talk "Using the Power of Layered Animation to Expand Premium Content in Battlefield 4," Senior Animator, Ryan Duffin, explained how the team tried different things with the shield, while using a hand gun. These approaches failed, as the team didn't have the time required to create needed for animation changes, or they were limited by the last generation consoles and their memory.

Duffin said: "We didn't have enough memory. It added about a megabyte, but a megabyte on a 2006 console is a lot, so it didn't work out." Three different approaches were used, but the team started leaning toward a two-handed shield, which makes it impossible to use a gun at the same time. Players holding the shield will be able to melee using it, with an attack range of around 1 meter, or 3 feet.

Duffin added: "There was a lot of resistance at first. But the more we assessed it, the more we realized it was a better feature. It turns out that stopping bullets in a first-person shooter is a ton of fun. We're confident that it will create a new dynamic for the game."