GIGABYTE has just taken the wraps off of its new high performance server motherboard, the GA-6PXSVT, the company's first single Socket 2011-based workstation motherboard that features 10GbE.

The GA-6PXSVT supports the Intel Xeon E5-1600 V2 and E5-2600 V2 processors, up to 256GB of ECC memory, and all of the usual features you would find on a high-end workstation motherboard. First we have the single SFP+ 10GbE port that is coupled with two additional GbE ports, making the GA-6PXSVT quite the networking performance powerhouse.

The GA-6PXSVT features Intel's third generation 82599EN 10GbE controller with a low latency SFP+ interface, which means that users benefit from an on-board package which delivers higher bandwidth, lower thermals and footprint, and cost performance compared to the traditional method of adding 10GbE capacity through a PCI-Express expansion card. 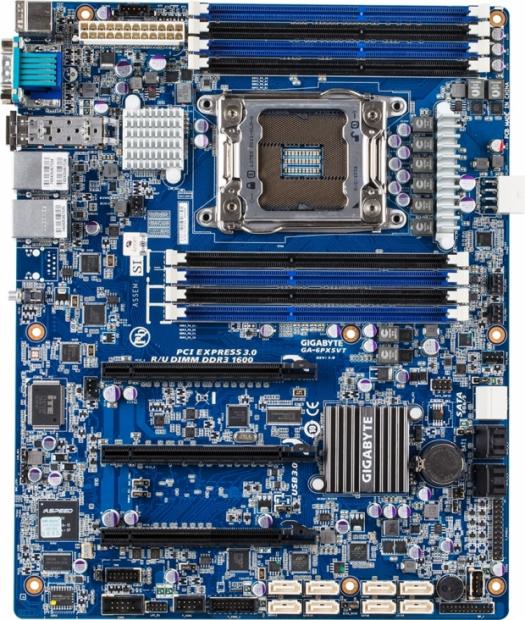 GIGABYTE has also provided native SATA capabilities from the Intel C602 chipset, bolstering the storage capabilities with an extra Marvel 88SE9230 controller. This means that the GA-6PXSVT has 10 x SATA III ports, and 4 x SATA II ports. Having the ability of hooking up 14 x HDDs is quite the boost for storage enthusiasts who after after a motherboard with native 10GbE.