As with Battlefield 3, DICE is tweaking in-game settings to make Battlefield 4 a more well-rounded and enjoyable experience, and today DICE has listed out its latest round of tweaks coming soon in patch form. DICE says that the tweaks are based on user feedback and are designed to make the battlefield a more level and even playing field. 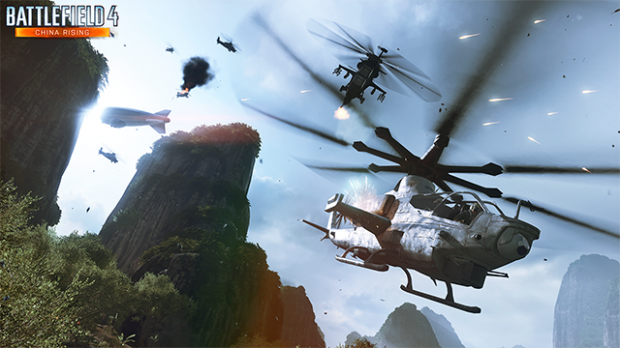 DICE says that all of the forth coming tweaks involve vehicles that are considered overpowered and a reduction in their power, feed rate, or blast radius will occur with the upcoming patch. Notably the amount of missiles carried by mobile Anti-Aircraft vehicles have been reduced from 6 to 4, and the velocity of the MAA's 20mm cannon has been reduced from 1200mm/s to 800mm/s which matches the vehicles 30mm cannon. This reduces the effective range of the vehicle and should prevent players from camping in the spawn area with the vehicle.

Direct damage inflicted by the attack helicopters gunner's cannon has been increased slightly and the new effect is said to feel more like how it did in Battlefield 3. Additionally the scout chopper's 25mm cannon's splash damage has been reduced as it caused too much damage to the infantry over the 7.62mm mini gun.

Tanks have also taken a hit, with the STAFF shell power being reduced by 25-percent. On the other hand, the M2 SLAM has been reduced in power and is vehicle damage radius is now 3-meters over its previous effective range of 6-meters. MTB LAW Missiles have had its intelligence reduced down some as well. A full copy of the report has been pasted below straight from the Battlefield Blog.