Early this morning, Samsung announced its fifth generation of green memory solutions that greatly reduce energy consumption and save customers money. The unveiling came at the company's Memory Solutions Forum that is being held today in Seoul Korea and were presented under the theme of a "New Memory Paradigm." 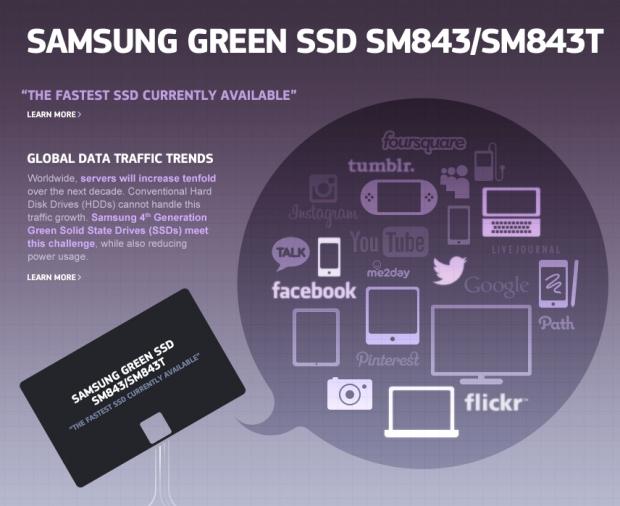 "With the introduction of these innovative memory solutions that maximize IT investment efficiency, we have set the stage for sharply strengthening the value of advanced memory," Executive VP of Sales, Young-Hyun Jun, said in his keynote. "We will continue to benefit society with the introduction of green IT technology in cooperation with our global partners to lead the global IT industry in creating greater shared value for customers."

Samsung says that the new memory solutions are optimized for the next-generation of data centers which feature cloud computing that is based around big data. Samsung offered three new green solutions to the market including DDR4, PCIe SSDs and a combo of the two technologies. These solutions have been designed to achieve dramatic improvements in performance and energy savings over existing IT technology.

The Green DDR4 solution achieves a server data transfer speed of 2,133 megabits per second (Mb/s), a leap over DDR3's performance limit of 1,866 Mb/s. This enables a 15 percent performance boost and consumes 24 percent less energy. It also provides a greater amount of error correction in further improving system reliability. Samsung is planning on expanding the high-speed DDR4 DRAM market even more in the future with additional next-generation products and will be able to eventually offer DDR4 with a data transfer speed of 3,200Mb/s, 1.5 times faster than today's DDR4 enterprise products.

Samsung's new green PCIe SSD solution offers a data transfer speed of four gigabytes per second (GB/s), which is six times faster than 600MB/s SATA SSD's, while reducing the delay in data transfer by 83-percent. These performance upgrades further maximize IT return on investment by increasing the level of energy efficiency approximately 2.4 times. Samsung plans to introduce other next-generation PCIe SSDs, based on its new 3D V-NAND technology and a new proprietary NAND controller, at a later date, in further expanding the premium SSD market.

A combination of Samsung's DDR4 and PCIe SSD green memory solutions will enhance the performance of server systems approximately 1.6 times and quadruple system capacity by eliminating unnecessary data duplication in the enterprise storage systems. As a result, the combined solution can achieve the highest level of efficiency among widely used green IT solutions and overcome difficult prerequisites for new server systems involving budget, power consumption and space optimization.

If all server systems adopted Samsung's fifth generation green memory solutions, an anticipated power savings of 45 terawatts per hour could be achieved. This translates into six billion people saving the power needed for everyday smartphone use for two years, which is equivalent to planting 800 million 10-year-old trees.