It looks like Tesla Motors' Model S electric car is about to sell a bunch more vehicles, after it received five stars for all of the National Highway Traffic Safety Administration's tests.

There were four tests involved: front, side, pole and rollover. The Model S from Tesla scored five stars in every single test, which is somewhat of a record considering most safe cars score five stars on the frontal crash protection test, and four stars for side impact protection. Tesla adds in its announcement that during a previous roof crush test used during validation, the machine failed when applying more than 4 G's of pressure.

This pressure is the same as stacking four of the Model S cars on top of each other, all without the roof breaking - quite incredible. The NHTSA has said that the total scores made up of five stars for all tests, is one of the highest on record for a production vehicle, but how did Tesla do it? 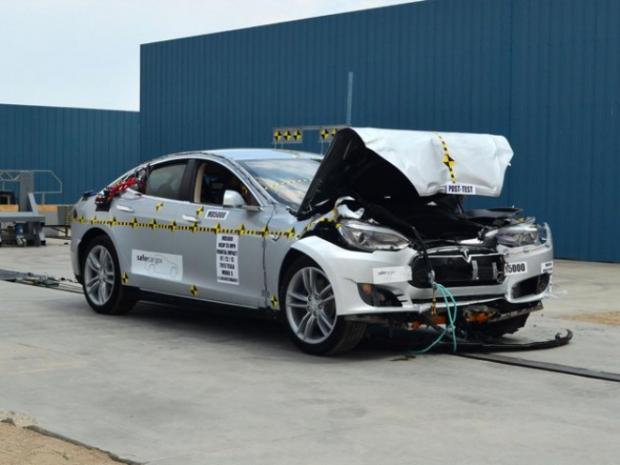 It is mostly a testament to Tesla Motors' engineers, who were able to maximize the amount of sacrificial space, with the battery placement close to the floor helping out, too. The rear crash test, which is quite important considering families would keep a rear-facing child seat in the back, scored high, with no "permanently disabling injury to the third row occupants." This is thanks to Tesla using what it calls a "double bumper" that absorbs additional impact.

The included lithium-ion battery that powers the Model S handled all of the tests perfectly, with no leakage or fire.