NASA's next step into the dark beyond is with their Orion capsule, which is looking to enter its first test flight in 2014. NASA's Apollo missions are behind them, so the space agency are looking into the future with their Orion spacecraft and Delta IV rockets to send man into space. 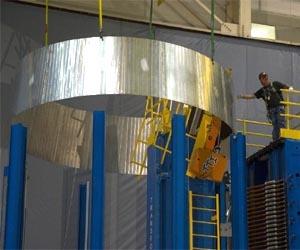 Part of the process is to make sure that the Orion capsule will survive the extreme temperatures of re-entry, and even though Orion is one of the most advanced spacecraft ever designed, testing is still necessary.

The Apollo missions most important part of surviving re-entry is thanks to its heat shield which protects the ship during re-entry. The Orion capsule takes it a step further where it's composed of two parts: a Titanium skeleton that is bolted to a carbon fiber skin. This takes nearly 3,000 bolts to hold the skeleton to the skin, after this the heat shield is shipped to Textron Defense Systems just outside of Boston, where they'll add the final layer of albative material.

Once the finished heat shield is installed onto the Orion capsule, which should be around next summer or so, it will be ready to begin actual testing which will see Orion travelling more than 3,600 miles above the Earth, where it will turn around and return to Earth at almost 5,000mph, faster than any current human spacecraft. Exciting!