Despite the disparity in cost and convenience, DVD and Blu-ray rentals through mail and physical retailers still outnumbers streaming. Rentals through retail stores, kiosks, and Netflix's mail service made up more than 62 percent of all movie rentals in the first half of the year according to NPD Group. 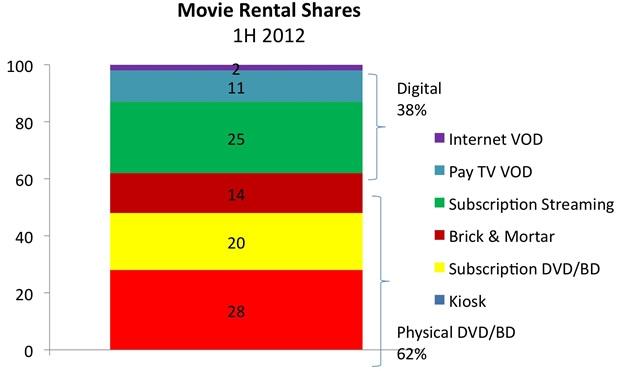 In stark contrast to the figure above, subscription streaming, pay TV video on demand, and Internet VOD made up only 38 percent of movie rentals. Even though rentals are still the majority, the size of their majority has been shrinking. Rentals are down 17 percent from last year and stores continue to be replaced with kiosks.

45 percent of rentals came from kiosks, up 5 percent from last year. Netflix's push to streaming has also contributed to the decline in physical rentals. Netflix announced 530,000 new streaming customers while at the same time losing 850,000 of its DVD service. Part of what is keeping streaming down is the lack of extra features and availability of all movies. Often times a movie is only available as a physical copy.

"Kiosk and subscription Internet streaming are generating strong user satisfaction ratings, including future rental intent, price, and value, which is reflected in market share gains," NPD analyst Russ Crupnick said in a statement. "Netflix is frequently the most popular video application on connected devices, so an increase in households with Web-connected Blu-ray disc players, tablets, and smart TVs will lead to still more video streaming activity."