Apple released iOS 6 Beta 3 to developers today, with the next-gen mobile OS set to hit users' devices sometime "this fall", most likely with the new iPhone that is rumored to be announced on August 7.

iOS 6 Beta 3 is Build 10A5355d, which is released only three weeks after the previous dev version which was Build 10A5338d. Users are the ones that really add juice to this news, thanks to forum discussion and blogs. One of the additions to this new beta is a new section in the Settings app for Maps, which now allows users to change the volume of the navigation voice, set distances to display in miles or kilometers, set map labels to display either in the local language or always in English, and finally, to set map label sizes to either "normal" or "large". 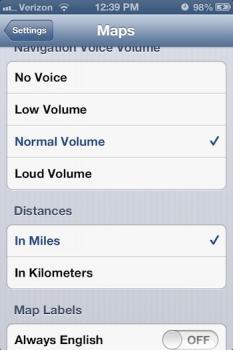 Other changes found in iOS 6 Beta 3 include: