IFA 2011 - Sony just got done with one of the first major press conferences of IFA 2011 in Berlin, Germany where as expected they unveiled two Android tablets. 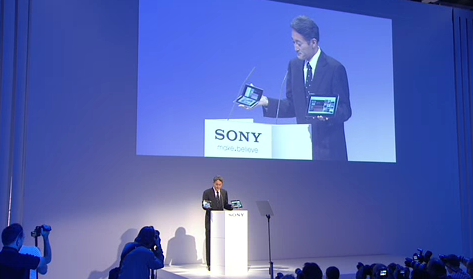 While few hardware specs were discussed during the announcement, the Sony tablet S will go on sale in September in Europe and cost 479 euros. And a little later on in November, Sony will bring out the Sony tablet P which will come in at 599 euros.

Some of the big featured discussed is that both tablets will come with full Playstation certfication. The big nosie being made by Sony during the announcement were that Sony tablets are "simple and beautiful to use". A feature called "Simple App" was mentioned brefiedly that is a new way by Sony to organise app which is said to "help users spend less time navigating the app store and more time to just use and play wat they want".

Additionally, both tablets will come with cross-device connectivity that allows you to use your tablet to control your Sony Bravia television and stream movies etc to it from within your house. Clearly Sony has worked hard to leverage all of its business units into its tablet line including games, movies, TV shows and Sony brand music. One of the last lines delivered was, "so much to enjoy". It seems like it - you'll have to wait a little bit longer and then we'll find out for sure.