Okay, so originally we got all mixed up in our rush and were actually looking at the GD55 throughout most of the video, but we made a correction at the end of the video.

As you'll see in the video above, the P67A-GD65 is a mid-range motherboard from MSI that uses an LGA-1155 socket which means it supports Intel's upcoming Sandy Bridge processors. Straight up it's easy to see MSI design and attitude style in the design and it comes packed with loads of good features. The big one that MSI is pushing is "Military Class II". It has been upgraded from the first version in the P55 boards to provide even better power and stability. This is done through the use of a six phase power SFC choke setup that provides up to 30% better efficiency than standard chokes, 100% Hi-c CAP's and Japanese made solid capacitors with a claimed life-time of an impressive 10 years. 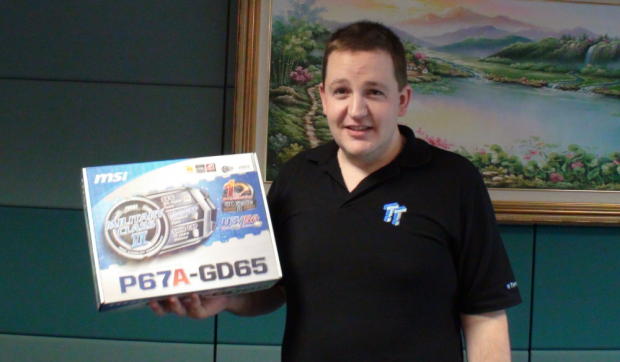 It also comes packed with "OC Genie II" which provides quick and easy one button touch overclocking to the CPU frequency. If you have an upcoming MSI H67 motherboard, instead of overclocking the CPU, the OC button will instead overclock the onboard IGP (graphics) instead. Sadly we are unable to report the increased CPU clock speed due to the Intel NDA, but we saw the reported number on the box, and let's just say it's pretty damn impressive and a rather big increase over the default clock speed. You also get official NVIDIA SLI and AMD CrossFire support.