All NewsBusiness, Financial & LegalCases, Cooling & PSUContests & GiveawaysCPU, APU & ChipsetsDealsDisplays & ProjectorsGamingMotherboardsScience, Space, Health & RoboticsStorageVideo Cards & GPUsVirtual & Augmented Reality
All ReviewsAll ArticlesAudio, Sound & SpeakersCases, Cooling & PSUCPUs, Chipsets & SoCsComputer SystemsDisplays & ProjectorsGamingMotherboardsNetworkingPeripheralsRAMStorageVideo Cards & GPUs
GuidesGamingAsk the ExpertsNewsletterAboutPrivacyForums
AMD Zen 4Intel ArcBattlefield 2042RTX 3090 TiRTX 4090RTX 4080GTA 6Elon MuskHDMI 2.1
Storage
The geeks over at AnandTech have laid hands on the new OCZ Vertex Plus SSD and are offering up a preview of the storage device and its new Indilinx Martini controller. The new controller came after the next-gen 6Gbps Jet Stream controller from the firm was delayed until next year. The controller used in the OCZ SSD is called Barefoot and is a new hardware revision and Martini is the new firmware for this new hardware only. 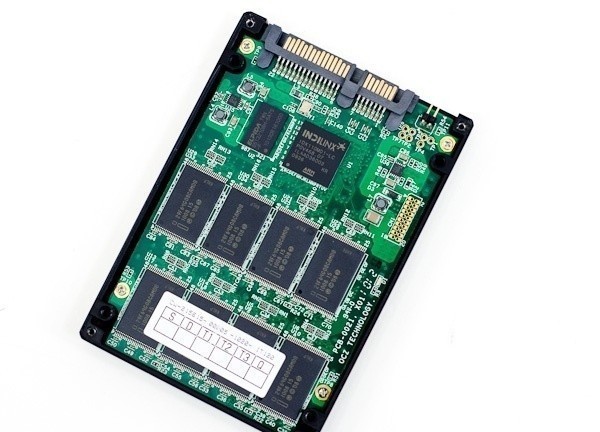 The new controller sets aside more spare area for its garbage collection and bad block allocation than the older controllers. The older Barefoot controller would leave an SSD with 128GiB of NAND with 119.2GiB or storage and the new one leaves 115.2GiB. The target pricing for the SSD using the new controller will be $74.99 for 32GB, $114.99 for 64GB, and $194.99 for 128GB. That pricing is actually pretty good.

In testing the Vertex Plus SSD scored 220.6MB/s on sequential read and 204.7MB/s on sequential write. AnandTech says that new SSD controller loses in longevity to other more modern controllers, but helps make up for that in price. The SSD would be a decent option for a budget performance system wanting to use an SSD.
NEWS SOURCE:anandtech.com