All NewsBusiness, Financial & LegalCases, Cooling & PSUContests & GiveawaysCPU, APU & ChipsetsDealsDisplays & ProjectorsGamingMotherboardsScience, Space & RoboticsStorageVideo Cards & GPUsVirtual & Augmented Reality
All ReviewsAll ArticlesAudio, Sound & SpeakersCases, Cooling & PSUCPUs, Chipsets & SoCsComputer SystemsDisplays & ProjectorsGamingMotherboardsNetworkingPeripheralsRAMStorageVideo Cards & GPUs
GuidesGamingAsk the ExpertsNewsletterAboutForums
AMD Zen 4Intel ArcRTX 3090 TiRTX 4090RTX 4080Diablo 2GTA 6Elon MuskHDMI 2.1
🔥 GIVEAWAY: be quiet! Pure Base 500 FX, Pure Loop 2 FX, and merch! 🔥
Peripherals
When it comes to high quality, gaming mice there are really only two companies that your average gamer looks to. Those companies include Logitech and Razer. Razer has some great gaming products, but its mice aren't exactly known for lots of bling or style. A Razer mouse tends to be black with some LED lighting thrown in to spice up the design. Razer has announced a couple special editions of its Naga MMO mouse that are very colorful. 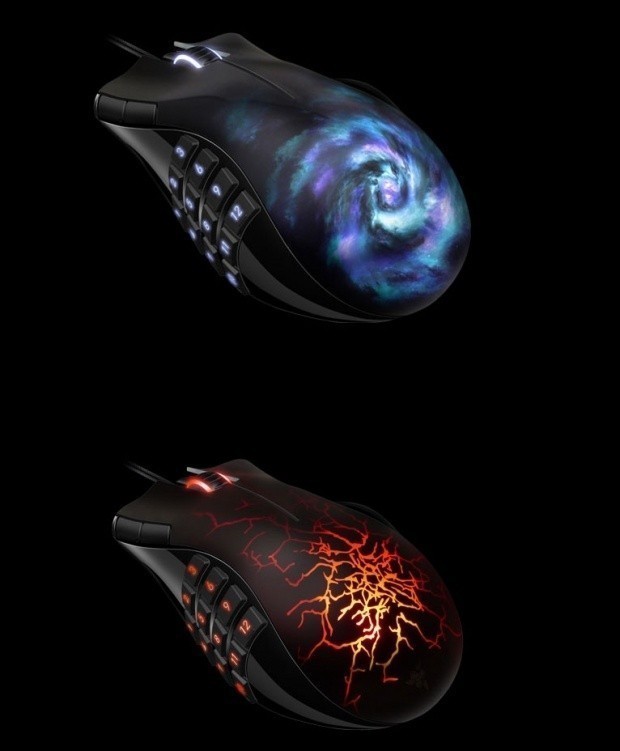 The special editions include the Naga Maelstrom and the Naga Molten gaming mice. The Maelstrom mouse has a colorful swirl effect on it that looks sort of like a spiral galaxy to me. The better looking one in my opinion is the Molten version with a cracked red and orange lava design. The Maelstrom version also has blue lighting for the buttons and scroll wheel while the Molten has red lighting.

Other than the new colors, the special edition Naga mice are the same. You get 17 programmable buttons that can have macros bound to them. The mouse has 5600dpi sensitivity setting, 1000Hz ultrapolling, and the silent ultra slick feet Razer uses on its mice. You can get optional software add-ons for the mice as well. Each of the special versions sells for $79.99 and will ship next month.
NEWS SOURCE:press.razerzone.com