All NewsBusiness, Financial & LegalCases, Cooling & PSUContests & GiveawaysCPU, APU & ChipsetsDealsDisplays & ProjectorsGamingMotherboardsScience, Space & RoboticsStorageVideo CardsVirtual & Augmented Reality
All ReviewsAll ArticlesAudio, Sound & SpeakersCases, Cooling & PSUCPUs, Chipsets & SoCsComputer SystemsDisplays & ProjectorsGamingMotherboardsNetworkingPeripheralsRAMStorageVideo Cards
GuidesGamingAsk the ExpertsNewsletterAboutForums
RTX 3090 TiRTX 4090Diablo 2GTA 6Halo InfiniteElon MuskRTX 3080HDMI 2.1
Motherboards
ASRock makes some nice mainboards for enthusiasts and gamers. The company has announced a new mainboard and has offered us the details of the board. The new offering is called the X58 Extreme6 and it uses the Intel X58+ ICH10R chipsets. The board is cool looking too with a black PCB with white and blue accents. The board has all sorts of nice features too like a front panel USB 3.0 port adapter. 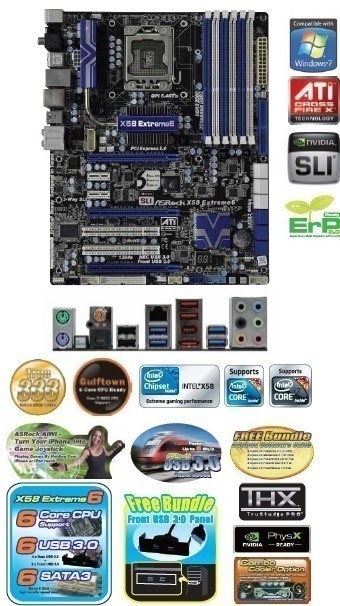 The board supports Intel 1366 CPUs up to the Core i7 extreme edition processors. The board uses passive cooling with heat pipes and has six DDR3 DIMMS for system memory. Audio is supported up to 7.1 channel HD audio a Blu-ray playback is supported with the audio device along with THX. The chipset allows support for both NVIDIA SLI and CrossFire from ATI.

The board has a pair of SATA 6Gb/s ports with support for RAID 0/1 and JBOD. Four other SATA 6Gb/s ports are offered with support for normal HDDs and hot swap functionality. The rear of the mainboard has four USB 3.0 ports and a header for a single USB 3.0 port on the front of the computer. Pricing is unknown, but the board is very feature packed.
NEWS SOURCE:asrock.com