All NewsBusiness, Financial & LegalCases, Cooling & PSUContests & GiveawaysCPU, APU & ChipsetsDealsDisplays & ProjectorsGamingMotherboardsScience, Space & RoboticsStorageVideo CardsVirtual & Augmented Reality
All ReviewsAll ArticlesAudio, Sound & SpeakersCases, Cooling & PSUCPUs, Chipsets & SoCsComputer SystemsDisplays & ProjectorsGamingMotherboardsNetworkingPeripheralsStorageVideo Cards
GuidesGamingAsk the ExpertsNewsletterAboutForums
Laptops
Field workers that don't have a desk to sit at most of the time would have a hard time using a normal rugged laptop of netbook. Without somewhere to sit the notebook or netbook, typing would be impossible. This type of worker often uses a tablet because input can be made with one hand and these tablets have to be rugged to survive the inevitable drops. 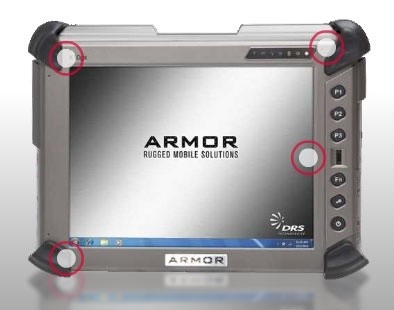 A company called Armor has announced a new tablet computer for this type of use called the Armor X10gx tablet PC. The machine has a 10.4-inch 1024 x 768 transreflective LCD that can be reading direct sunlight. The machine stores to a 64GB SSD by default but has options for an 80GB SSD or a 160GB SSD. The machine also has an SD/SDHC card slot.

The standard RAM in the tablet is 2GB and it can be expanded to 4GB. The CPU used in the machine is an Intel Core 2 Duo 1.2GHz SU9300 unit. The screen supports pen and touch input and a pen only input is available. The OS is Windows 7 Ultimate and the machine meets military specs for ruggedness. Other features include Gobi mobile broadband, WiFi, Bluetooth, removable storage, and hot swappable batteries.
NEWS SOURCE:drsarmor.com