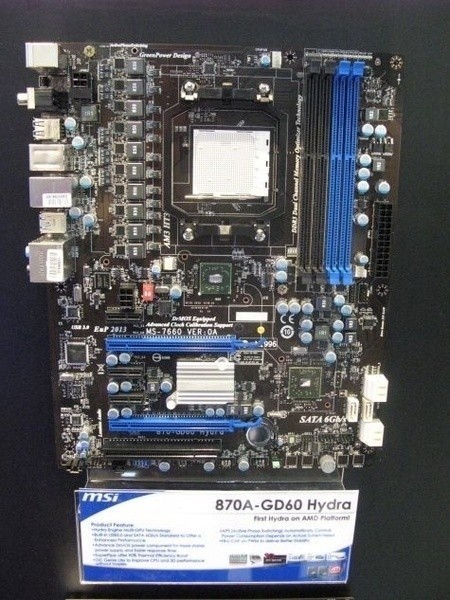 MSI once again decide to implement it on a board, this time one based on the AMD 870 + SB850 chipset for AM3 processors. MSI calls this board the MSI 870A-GD60 Hydra. While AMD 870 has no PCI-E external switching and only one PCI-E 2.0 x16 link, MSI connected this link to the Hydra chip which in turn gives two full-bandwidth 2.0 x16 links for some mix and matching goodness.

Other specs of the board include a 10-phase DrMOS VRM, four DDR3 slots for dual-channel operation, SATA 6Gbps support thanks to SB850 as well as NEC controlled USB 3.0 ports, FireWire, eSATA and 8 channel HD audio w/ S/PDIF connections.

The board is expected to launch just before AMD rolls out its upcoming Phenom X6 (six-core) processors.
NEWS SOURCE:tweakers.net
Newsletter Subscription