All NewsBusiness, Financial & LegalCases, Cooling & PSUContests & GiveawaysCPU, APU & ChipsetsDealsDisplays & ProjectorsGamingMotherboardsScience, Space & RoboticsStorageVideo CardsVirtual & Augmented Reality
All ReviewsAll ArticlesAudio, Sound & SpeakersCases, Cooling & PSUCPUs, Chipsets & SoCsComputer SystemsDisplays & ProjectorsGamingMotherboardsNetworkingPeripheralsRAMStorageVideo Cards
GuidesGamingAsk the ExpertsNewsletterAboutForums
RTX 3090 TiRTX 4090Diablo 2GTA 6Halo InfiniteElon MuskRTX 3080HDMI 2.1
Motherboards
Reminiscing of the dodgey capacitor woes occuring left, right and centre on motherboards of a decade or more ago, it's been discovered by Lars over at SemiAccurate that the same nightmare is potentially unfolding yet again, although not with regard to capacitors (thankfully they're solid state these days to ensure no issues with age), but rather the chokes onboard.

You can see from the picture above that the chokes on this board are rusting. These are iron core chokes; cheaper than ferrite core chokes so therefore used on low to mid-range motherboards. Unlike ferrite core chokes, they have iron in them which is a metal that easily rusts when it has come into contact with water at some point. Here's an extract of the most probable explanation of this from the source :- 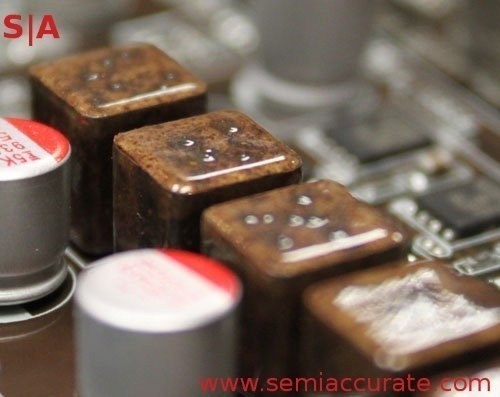 So far it's only the one board manufacturer with affected boards (of which thus far seem to be limited to P43, G31 and AMD 785G based models). It's been said that only boards inside of Taiwan and Singapore have been spotted with the rusty choke issue so far, but there's nothing to say it's not a much more widespread problem and only time will tell for sure.

What's of most concern is that the motherboard maker is aware of these affected boards and instead of simply pulling them off the market, they're apparently shifting them with lower pricing to help clear their inventory. The particularly scarey thing about this is that the issue, in time, could eventually develop into catastrophic failure whereby not only the motherboard would become useless, but it could also potentially kill the CPU residing in its socket.
NEWS SOURCE:semiaccurate.com
Newsletter Subscription