They have taken the base iPhone and thrown something new under the hood. Almost everything is faster, roughly twice as fast. Of course not all applications will enjoy this. Maybe there is some truth to the rumors that Apple is using OpenCL and a more powerful GPU to accelerate the iPhone.

Apple has dropped in a new camera 3MP to be exact with auto focus and tap to focus as well as macro. 7.2Mbps HSDPA, video recording (complete with built in editing), voice control (not only for dialing but for iTunes control, a compass application (should be great for hikers),hardware encryption and of course all of the new features of the iPhone OS 3.0.

Apple has worked on the batter quite a bit too; they have improved the 3G Talk time to 5 hours and the WiFi Internet time to 9 hours.

Availability should be in a little over a week and a half from today in the USA. And after that even more countries, over 80 countries will have it by August.

Get ready it is going to be a busy summer. Read more here. 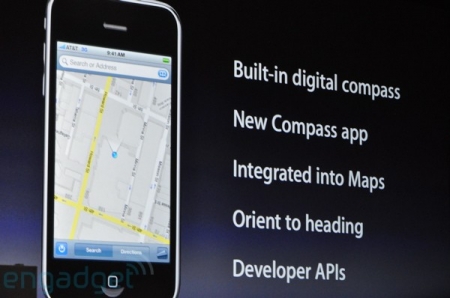 12:02PM "After that even more countries, over 80 countries will have it by August."

11:57AM "And something businesses have asked for... hardware encryption. All new iPhone 3GSs will have it."