Charlie Miller took home the top prize ($10,000) when he hacked a fully patched MacBook Air in a matter of seconds. He did this by exploiting a know vulnerability in Safari. The hack was performed by the MacBook's user clicking a simple link. Miller also made predictions before the competition that are shown below. They are surprisingly accurate.

The second place winner showed off a second Safari Hack and was able to hack both IE8 and FireFox but not as quickly as Safari and Miller. Apple has a long standing history of claiming to be more secure than Windows especially Vista; I wonder how they are taking this news.

Be on the lookout for a new commercial. 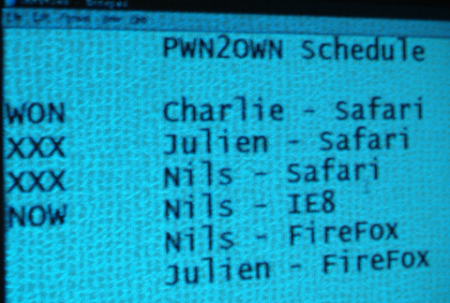 Android: hacked by 1 person. Not too tough but no one owns one.

IE8, Firefox: Survive unscathed. The bugs to exploit equation is too hard for $5k.

Blackberry, Windows Mobile, Chrome: I don't know enough to say anything intelligent. That said, they're probably hard/obscure and so survive.