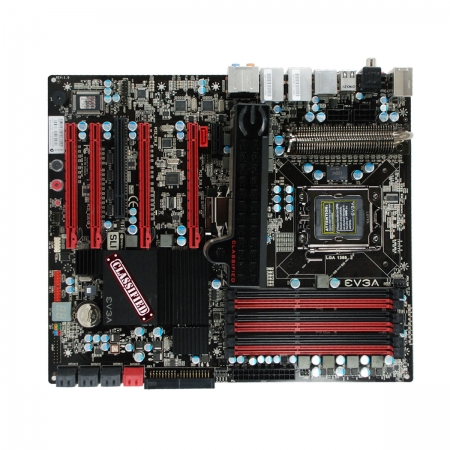 The new board features never before seen features such as 3-way SLI + PhysX + 1x PCIe device on a single board, 2 8pin +12V connectors capable of delivering 600 watts of power, and 10 phase Digital PWM with a switching frequency of up to 1333KHz.

The board has ten SATA 300 connections, four PCIe X16 slots with support for 3-way SLI and CrossFire, and six DDR3 slots for up to 12GB of triple channel memory, as well as many more enthusiast grade features. Expect to drop US$449.99 on the board once it becomes available.

Many Manufacturers are stuffing the CPU Core Power Circuitry with endless phases without looking at the big picture. We take a very first to very last approach instead." said Peter "Shamino" Tan, Overclocking Evangelist for EVGA. "First the +12v comes into the board through the 8 pin CPU Power Connector. We remove the bottleneck here by doubling the current input capability with dual +12v. Next, the +12v is processed through a beefy 10 phase Digital PWM with a switching frequency of up to 1,333KHz, twice the speed of typical Digital PWMs and three times the speed of typical Analogue! Furthermore, you can adjust the switching frequency through the BIOS from 800KHz to 1,333KHz, deciding between power efficiency and heavy overclocking or benching.

Next, a super-low ESR and ESL film capacitor placed right behind the CPU socket ensures the cleanest power goes into your CPU. This finally passes on to a high quality CPU socket with three times the normal amount of gold content for the lowest impedance and highest current transfer, and of course, the socket is anodized a slick shiny black!