This board that will feature the 790GX chipset and the SD750 will be in a class by itself for some time as there are not going to be any DDR3 capable Phenom IIs for a couple of months.

Still ECS can claim they had it first. 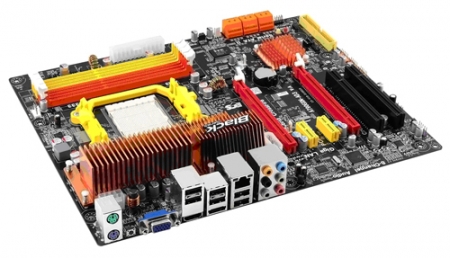 Inheriting the advantages of AMD 790GX chipset, the A790GXM-AD3 Black Series motherboard incorporates the support for the latest 45nm AMD Phenom II processors to deliver the next generation computing capabilities. In addition, ECS A790GXM-AD3 comes with the feature of dual channel memory architecture that supports DDR3 1333MHz memory up to the capacity of 32GB which is capable to provide faster data throughput for memory-intensive applications. To meet hardcore overclockers' requirements, the latest exclusive BIOS utility, M.I.B. II, is included to provide various detailed tweaking options. Paired with AMD SB750 south bridge controller supporting the function of ACC (Advanced Clock Calibration), ECS A790GXM-AD3 allows users to push the overall system performance to another higher scale. As the key factors that eventually decide the stability while overclocking, the 5 phase power design with unique cooling system leads users to reach the limit without suffering any issues of overheating. With all these innovations of evolution in structure, ECS A790GXM-AD3 is capable of bringing a revolutionarily optimized gaming platform to every extreme gamer.