All NewsBusiness, Financial & LegalCases, Cooling & PSUContests & GiveawaysCPU, APU & ChipsetsDealsDisplays & ProjectorsGamingMotherboardsScience, Space, Health & RoboticsStorageVideo Cards & GPUsVirtual & Augmented Reality
All ReviewsAll ArticlesAudio, Sound & SpeakersCases, Cooling & PSUCPUs, Chipsets & SoCsComputer SystemsDisplays & ProjectorsGamingMotherboardsNetworkingPeripheralsRAMStorageVideo Cards & GPUs
GuidesGamingAsk the ExpertsNewsletterAboutPrivacyForums
AMD Zen 4Intel ArcBattlefield 2042RTX 3090 TiRTX 4090RTX 4080GTA 6Elon MuskHDMI 2.1
GIVEAWAY: TEAMGROUP T-Force VULCAN Z SATA III SLC 2TB SSD, two up for grabs!
Internet & Websites
YouTube gave itself a nice little upgrade a short time ago, which no doubt some of you have spotted already. With the 4:3 aspect ratio mostly being a thing of the past, they decided they should get with the times and allow for widescreen (16:9) content to be uploaded and watched in full aspect. 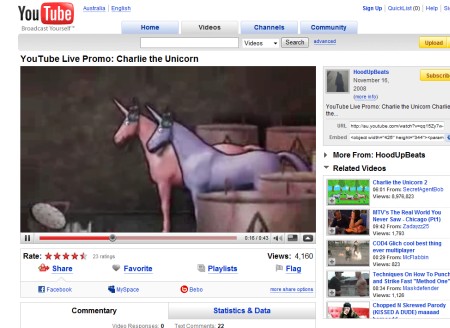 As a result of this, the site's layout also gets expanded to 960 pixels so as not to cripple the video in any way. Furthermore, existing 4:3 content will not be stretched (rather, you'll just see two black bars on each side) so as to retain the original aspect.