The Spider platform was a marketing initiative created by AMD to generate interest towards its original Phenom processor, 790FX motherboard and Radeon HD3800 series graphics cards. 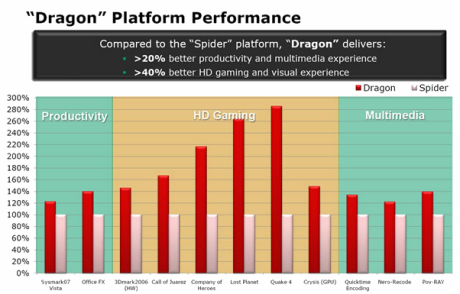 AMD's Dragon platform, clearly more powerful than a mere spider, is set to become the new gaming platform for AMD in 2009, if leaked documents seen by our editors are to believed. The Dragon platform includes the Phenom II processor, new and revamped 790 series motherboards and Radeon HD4800 series graphics hardware.

AMD is claiming in internal documents that its upcoming Dragon platform will be up to 40% faster in gaming than the previous Spider systems.

We'll just have to wait and see I guess - before March 2009 we should know entirely for sure.