All NewsBusiness, Financial & LegalCases, Cooling & PSUContests & GiveawaysCPU, APU & ChipsetsDealsDisplays & ProjectorsGamingMotherboardsScience, Space & RoboticsStorageVideo CardsVirtual & Augmented Reality
All ReviewsAll ArticlesAudio, Sound & SpeakersCases, Cooling & PSUCPUs, Chipsets & SoCsComputer SystemsDisplays & ProjectorsGamingMotherboardsNetworkingPeripheralsStorageVideo Cards
GuidesGamingAsk the ExpertsNewsletterAboutForums
Halo InfiniteBattlefield 6Elon MuskGTA 6RTX 3080RTX 3070HDMI 2.1Bitcoin Mining
US consumer habits are something of a laugh all by themselves (and I live in the US). It seems that as we wind deeper and deeper into the technological future, Americans are still buying without know what they are getting into.

Nick Farrell over at the Inq has put up an amusing article on a recent (and very limited) study done on this very thing. It seems that, at least in Virginia, roughly 50% of people asked said they needed help getting their shiny new toys up and running and an even larger percentage would need outside help to fix any technical issues they encountered.

Read all about it here 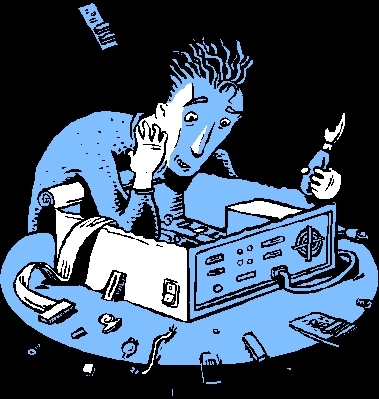 Sydney Jones, co-author of the report by the Pew Research Centre's Internet and American Life Project said many Americans were buying gear because it was popular rather than having any idea how it worked.

Some users work out the technology a lot faster and they have a teaching role among other more dim Americans.

Forty-eight percent of the 2,054 adults surveyed by the Pew Centre said they usually need help from others and to show them how they work, and where the 'on' button was. If they have any problems just over a quarter said they could fix them themselves.

By fix we don't know if that means hitting the device with hammers until it is not a problem any more. Since men are more likely than women to 'fix' the problem themselves we guess that most gadgets would end up with scratch marks on the casing from the occasional use of a nail gun.