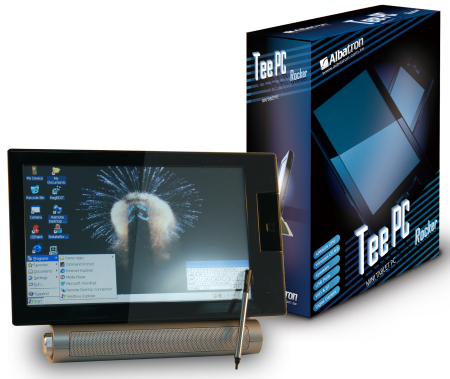 It's not an ultra powerful system and uses the Windows CE 6.0 operating system which comes pre-installed. It comes with a 7" touch screen, that is capable of a resolution of 800 x 480, and touch pen but there is no slide out keyboard, instead you need to use the included on-screen keyboard.

There are two USB 2.0 ports on the docking station which allow you to hook up a keyboard and mouse. The docking station also features a speaker but you can also hook up external speakers if you want something more powerful. It also packs in wireless and Bluetooth support. 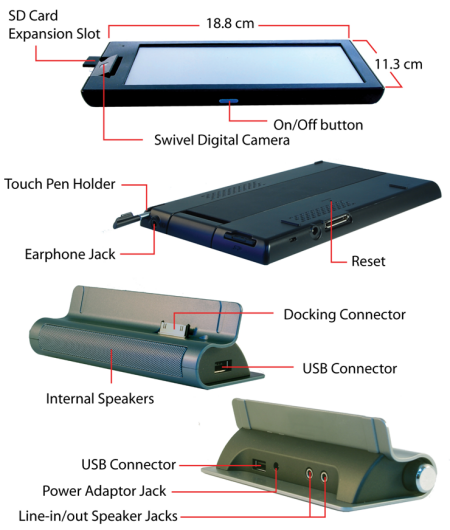 As far as the specifications go, Albatron has opted to use an ARM926 400MHz processor, 128MB of SO-DIMM DDR memory, 128MB of built-in NAND flash memory and 1.3M swivel camera. Albatron reckon that its new baby can decode H.264, MPEG4 and VGA at 30 FPS. An SD card slot is located on the tablet for removable mass storage.

As you would expect, the Tee PC weighs next door to nothing at just 343 grams (without docking station, we'd assume) and on a full charge the battery provides up to almost 11 hours of continuous usage. Albatron has made the Tee PC sound quite good on paper but we will need to get it into our labs before making any final judgments.

Straight up though we can say it would have been nicer to see Albatron create a tablet PC with either an Intel Atom or VIA Nano processor which can run either Windows XP or Vista but that might be something we have to wait for in a newer model later on.