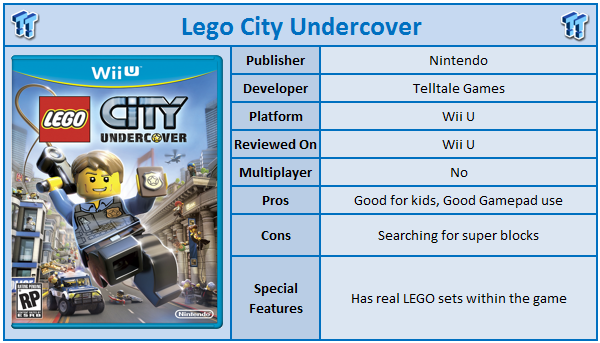 It's fair to say that over the current generation Telltale Games has established itself as the primary LEGO developer. Starting with franchises such as Batman, the team has moved onto other major film franchises such as the Lord of the Rings and also Marvel (which is currently in development). However, this time around they have tried something new. Rather than rely on an existing film IP, they have looked back towards the roots of LEGO and more specifically the City series of LEGO sets. The kind of sets you would have played with as a kid most likely. It is this nostalgia paired with the trademark antics and humour that makes LEGO City such a good game and one that all Wii U owners should pick up.

LEGO City Undercover picks up two years after the in development 3DS game due for release soon. You play as Chase McCain, a local police officer returning to LEGO City, after a trip overseas for undisclosed reasons. As Chase returns, his last big bust, Rex Fury escapes from prison and it is up to Chase to catch him and return him to jail. However, as you would expect, the story takes some twists and turns before arriving to its conclusion and as mentioned before, the humour the LEGO series is known for remains intact for both mission goals as well as the dialogue. 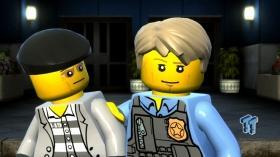 The best way to describe LEGO City Undercover is a LEGO version of Grand Theft Auto with a few differences. First of all the game is very much aimed towards the younger generation (but adults can enjoy it just as much), so you won't find loads of violence, swearing or anything that tends to give the controversial GTA series its name. Instead you play as a police officer going undercover to take down a major crime gang. That's not to say Chase is an entire goody two shoes, with one of the key components of his abilities being able to change into other uniforms such as a robber or spaceman.

Whilst LEGO City Undercover is primarily an open world game, when you reach the special missions, it becomes a lot more linear and a lot more like LEGO games we have seen in the past, where you have to solve a bunch of puzzles before moving on. Those who go in expecting to be able to solve the missions in various different ways like you typically would in an open world game will be disappointed. It is also one of the negatives we have with the game. It seems that Telltale Games were too frightened to move away from its regular tropes that the LEGO series has. There is only one way to solve each puzzle. The few exceptions to this are chase or escape missions, which appear in the main world of the game. 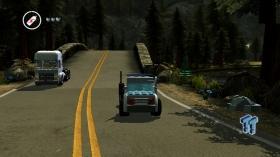 With that said, there is a lot more to this game in terms of the various LEGO sets and environments than we could have expected. The map is quite large and definitely on par with the size typically seen in GTA3, for example. As well as this along with the main missions set (of which there is fifteen chapters), there are some side missions to complete, such as races or time trials. One disappointment in this regard is that they have chosen not to put missions in for police and ambulance vehicles. This could have worked incredibly well for LEGO City, as it appears to be the most popular with young kids.

Having said that, this is definitely a game that young kids can play and enjoy. This does mean that as an adult you need to go into the game with a few caveats. First of all don't expect to be challenged by the game with there being zero punishment for death and the times for chases that occur being significantly more than that required even with mistakes - something quite different to a typical open world game. It's also the kind of game that parents and kids can play together.

In terms of Wii U specifics, there is a few things that utilize the gamepad quite well. First of all the missions are given to you by the various characters in the game on the gamepad, not the main screen and while the game does fall back to the 'let's just put a map on the gamepad' trope, it doesn't seem wasted. The gamepad forms an interactive part of the story and before the end of the game, you use it many times to find hidden enemies, listen in on secret meetings between enemies or to travel between fast travel areas via train or ferry. It's most definitely one of the few games to put the gamepad to good use.

The game is fairly lengthy with our playtime clocking in around the 12 hour mark for completion. Not once does the game feel likes its dragging although there is one facet to the game that we did not like at all and that is the super builds. That isn't entirely true, the super builds are fine and form an integral part of the game, but every so often it forces you to build one and generally you won't have enough bricks to do so. Then you need to spend about half an hour trying to find 'superbricks' before moving on. 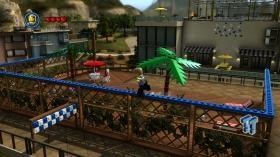 Where we have the problem is when they come thick and fast. There is one particular section of the game you are tasked with building three 'superbuilds' within about an hour's gameplay. This means that if you haven't been diligent in collecting bricks, you will very quickly be searching for blocks over and over again and it just isn't that much fun to do so.

However, in another positive, the environment the game is set in is impressive, to say the least. As expected, the entire world is made up of LEGO sets that are either purchasable now or have been in the past. Telltale Games have not invented anything just to be convenient and those who have played with LEGO since they were a kid will find some very familiar sets, like the trains, for example.

Visually the game does the job as well although there are times where it can have problems with maintaining a good frame rate. Considering the Wii U is supposed to be on par with the Xbox 360 and PlayStation 3, it's hard to fathom how this happened. We have no doubt that this game probably wouldn't incur this problem on those systems (we've seen much larger, more taxing games run fine) and that's what makes it so disappointing in that regard. Aside from this, the animations are spot on perfect to how you would expect a LEGO character to move, as are the vehicles. 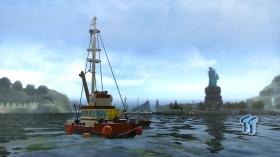 Voice acting and sound does the job with Walking on Sunshine by Katrina on the Waves first greeting you as you enter the city for the first time. There is some licensed music, but there is no radio stations within the cars, which seems like a missed opportunity - especially considering they went to the effort of licensing some songs.

LEGO City Undercover is the first game in a little while for the Wii U that is easy to recommend. It does have some problems such as the frame rate, but looking beyond that you will find a cute, charming game that adults can enjoy, just as much as kids. It may not be GTA and it may be a bit too easy for the adults, but the humour we have come to know and love from LEGO games is present and exploring the world, especially if you have had LEGO in the past, is a trip down nostalgia lane. If you have a Wii U, definitely look out for this one, but it simply isn't good enough to justify buying a system to play it.