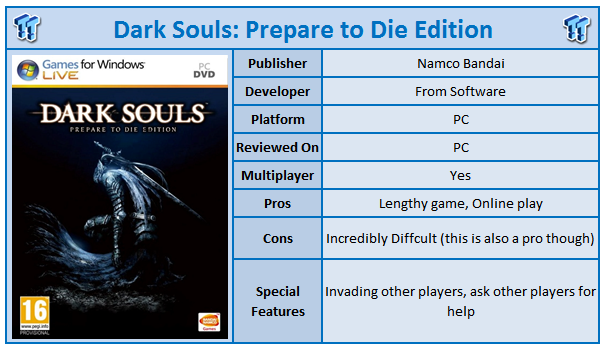 If ever there was a game that was destined to not succeed it was Dark Souls. There were so many decisions in this game that seemed so far out of left field and so different to the norm that it seemed destined to only attract a small hardcore base of gamers. However, the risk paid off and Dark Souls became one of the best RPG games of 2011, if not the best.

PC gamers clamoured for a port, and after a petition, From Software decided that a PC port should be done and this leaves us with the Prepare to Die Edition, an expanded version of the game that incorporates the upcoming DLC for the console versions as well as some revisions to the main game.

Dark Souls is a game where the storyline really does not matter. It's one of those games where story comes second to gameplay and this is in many ways why the game shines. ClichÃ© as it may be, the game does have a story, but the only time this really comes into play is during the opening and closing cut scenes. No real story progression happens during the actual gameplay.

And this is good because it allows the game to shine at what it does best. Dark Souls is a game with an open world, but punishes players over and over again. It is in fact possible with the right skills to defeat nearly every enemy in the game from the outset and it is also possible to be smashed to a pulp by the most basic of enemies. Even with a strong character. This paradigm is what makes Dark Souls what it is and rewards players for exploration and learning rather than just quick reflexes.

There are many to what will occur in this game. The first part is when you approach a new area. Around every corner enemies and traps are present to trip you up and whilst in most games finding a new area can be a time of joy and accomplishment, in Dark Souls it is a time to be most fearful. This is when you will most often succumb to the games many enemies or traps. And over time (a few hours usually), you will become accustomed to how the area works and use that knowledge to defeat it, giving ultimate satisfaction. 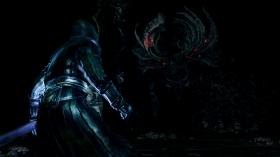 Dark Souls is a game that is not afraid to anger you to the point of you wanting to smash keyboards or controllers against the wall. There are many design aspects in Dark Souls designed to screw you over every single minute of your game time. For example, when you do succumb to the world (and chances are this will happen at least twice during the tutorial), you have to return to the last bonfire (save point). Quite often that bonfire can be at least an hour's gameplay behind your current position.

However, it gets worse. When you do succumb, you have one chance to make it back to your body and recover your items. If you do not make it back, you lose it all. This game is full of risk and reward and those who risk a lot, will be rewarded in many ways. And to top it all off visiting a bonfire will return enemies back to the areas you have cleared (except for the special characters). Again you have to make a decision as to press on, or return to the bonfire, heal up and take all the enemies out again.

One of the cruellest and more interesting aspects of the game is the invasion system. At a certain point in the game you can obtain an item which allows you to invade other players online and kill them. So if you are playing online (enabled by default on PC), at any moment someone can invade and kill you. Making you lose hours of progress.

This can also be put to a good use and you can ask other players to join your game to help you with some of the tougher bits. This particular feature gives an interesting insight into the psychology of gamers. Some want to just give grief, and others want to help. This is one of the features that make Dark Souls the game it is.

However, even with all this soul destroying game design in place, most of the time when you succumb to the world, it will be your own fault, and you will know it. Perhaps you ran around a corner too fast, took a jump you shouldn't have or pulled too many enemies. The game is punishing, but not to the extent that you think the game is being cheap and pulling out overly strong AI characters just to be cheap and nasty. And this gives an interesting effect. Instead of you wanting to throw this game against the wall and never play it again, you will want to come back over and over again, trying out new strategies until you ultimately win. Dark Souls can take over every waking moment of your life as you try to build new strategies and employ them to win.

There are a few things which are disappointing with the PC release. Namco Bandai have decided to implement Games for Windows Live into the software and this can lead to some connectivity problems sometimes, but also on the flipside it means that Xbox 360 controllers are supported natively and work perfectly. It is almost at a point where we can say that playing with a mouse and keyboard is pointless. Dark Souls was designed for a controller and this is clear as day when playing.

Another disappointment is the graphical options. Whilst Dark Souls is by no means a bad looking game, in fact the quite opposite, it remains true that the resolution and frame rate has been capped to that which is the same of the consoles. This gives the feeling of a cheap port even though the rest of the game really does feel polished. There are unofficial fixes out there now to remove these limits, but given the PC platform, this should never have had to happen in the first place. Other than that the atmosphere, level sounds and environments are all perfect to the console product and look amazing, even in there low resolution models.

In an age where gamers complain incessantly that games are too easy these days, and too short, Dark Souls comes out to show just how tough a game can be. From the outset you have no lengthy tutorial (one does exist however), no handholding or guides, nothing. It is you versus the world the game is set in and that is what makes it one of the most unique gaming experiences around.

Everyone's mileage will vary with it, everyone will have a breaking point, and everyone's game will play differently as there is almost infinite ways to beat each boss. Dark Souls is a game that will smash you to bits, but also hugely reward you. In an age where people have attention spans of five seconds, it's amazing that Dark Souls exists. But this truly unique gaming experience should be enjoyed at a slow pace and with patience because if you have the patience, the game will certainly reward you for it in a big way.