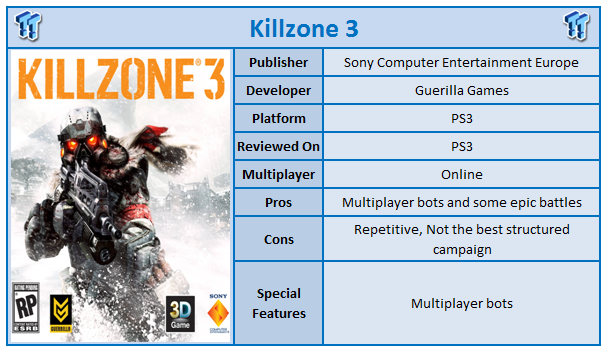 Killzone as a series has had a really interesting time of it. Debuting on the PlayStation 2 as Sony Computer Entertainments answer to the mega blockbluster Halo: Combat Evoled on Xbox, it was also the show pony for the PlayStation 3 during its unveiling at E3 2005. However, this is where the series started to go off the rails with gamers worldwide calling out the demonstration presented as most likely impossible. And so it was proved. Killzone 2 launched on the PlayStation 3 to much fanfare, but it didn't live up to the hype. Killzone 3 is the third attempt from Guerrilla Games and whilst they got a whole lot right this time around, they also got many things wrong.

The war between the ISA and the Helghan forces continues to rage. Vasari is dead and Helghan wants revenge. The new leader is slowly making inroads and building up a force to be reckoned with, but the military advisor is not happy. He wants to launch an attack directly on earth and has a weapon to do so with the excuse that action is not being taken quickly enough against the ISA forces who have made Helghan look like a laughing stock. Whereas the ISA has become quite depleted, and is offered a no questions asked surrender, but Sev and Rico smell something is up and decide to take the fight directly to the Helghans themselves.

Like the first two games, Killzone 3 is a first person shooter set in a sci-fi world. However, where many first person shooters focus on action, Killzone 3 focuses on the stories behind the war and the characters themselves; trying to build a connection between the player and the game. However, in many aspects it fails. The atrocity committed at the end of Killzone 2 is basically ignored despite the game being picked up directly after the end of Killzone 2, and in many ways this is puzzling. 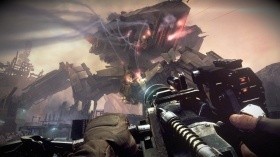 The gameplay itself is run of the mill as well, but it does have its impressive moments. First of all, the game world seems epic in scale; some of the enemies you will encounter are gigantic and really bring home the industrialist style of the helghan world. In practice the game ends up being 'run from A to B, shoot lots of guys and continue'. No puzzle solving and really the only variety on offer is when you take control of either the jetpack or mechs which have been added to the game.

As well as this, the game sometimes acts in ways that just does not make sense. The enemies are constantly bullet sponges which considering the number of them, gets very frustrating and there are times in the game where you will be taken out without really any idea as to how you got shot so easily and quickly. The one area the game excels here however is the AI smarts. They will take cover and also hunt you down when they know you are hurt. It's just a shame that Guerrilla felt it necessary to make the enemies so tough.

The biggest problem we have with Killzone 3 is that if you have played the previous two games you really have somewhat already played Killzone 3. There isn't that much different and the story is functional rather than enjoyable. The mission structure also leaves a lot to be desired. The story jumps around quite often. In one instance you all of a sudden are in an ice covered environment with no real explanation as to how you got there. And this happens quite a bit. The story jumps around so much that by the end you will wonder what is going on. The game also has a conclusion that makes the ending of Halo 2 look fantastic.

However, it's not all bad news for Killzone fans. Despite the lack of variety and improvements, the game does play well. It's not the kind of game you will want to blast through in one sitting as it does get repetitive, however. There is a few missions which will test your mettle as well. One such mission requires stealth, however this is not enforced. Whilst it is not good news to just shoot through that mission (and it makes it almost impossible), the game does not fail you for being detected in what is clearly a stealth mission.


Where the game does do good things is the graphics and environments. The first half of the game is really quite enjoyable, but it goes downhill from there. There is no doubt whatsoever that this is one of the better looking PS3 games available, but Killzone in many ways uses its graphics to sell it instead of the gameplay. The swagger of Rico and Sev running is emulated well in the game and the environments are suitably epic as mentioned before with pop in completely non-existent.

The characters are modelled well and despite the fact the enemies are bullet sponges and frustrating, they are animated and modelled to a high level as well. However, whilst the characters are also voiced well and the sound effects are good, the script and dialogue has let them down. The script is full of cliches and doesn't really expand the story as much as it could have. One standout performance is by Stahl of the Helghan army who's voice really suits the character well.

Being a Sony published game, it is of no surprise that PlayStation Move support has been included and we have a sneaking suspicion this is the reason the game was delayed into 2011. So was it worth the wait? Well, yes and no. There is no doubt that Guerrilla has put together one of the best PlayStation Move implementations into a game yet and it suits the game. Movement is performed with the navigation controller whilst the wand takes command of aiming and also the direction you are walking. At first it can feel clumsy, but if you give it time, you can acclimatise to it quite easily. We still prefer the dual shock, and for a FPS that is telling. 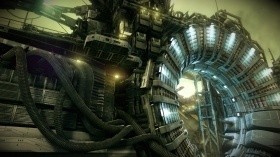 As expected, the game also includes multiplayer, but one new addition is the inclusion of bots. So for those of you who may not have your PlayStation on the internet or just prefer to play offline, it's there. Something interesting is that in the Botzone as the game calls it, all weapons and items are unlocked from the outset, where as online you need to build a career up. This makes using Botzone to prepare for online battles less useful than it could have been.

Killzone 3 is a good game, but it's not an outstanding game. For a franchise which Sony has put so much effort into it's a real shame that for the third game we are still seeing the same problems crop up. Awesome graphics do not make up for repetitive and sometimes frustrating gameplay, and if Guerrilla and Sony are to visit this series again in the first person shooter format, a rethink and some innovation is a must if this series is not to become one consigned to the list of those which had great potential, but never quite made it.