And so it comes to this. Bungie has left the Microsoft stable and joined up with Activision to start an entirely new franchise. After the success of Halo, you can bet on Bungie coming up with a formidable title for Activision to add to its stable. However, before then we need to finish the Halo story.

Halo: Reach is a love letter from Bungie to the fans; this much is clear. It takes everything learned over the past 10 years since Halo 1 and puts it into one of the most value packed games around. Halo was getting a bit old and stale, especially with ODST, but Reach reminds us of just why Halo is as big as it is.

In what is becoming a popular trend with video game sequels, Halo: Reach is a prequel to the original game. That's right, no master chief and no guilty spark to tear your hair out over. Instead, the game feels like a reboot of the franchise. By doing this, Bungie has been able to experiment with the series and it has paid off in spades. Halo: Reach includes some of the best gameplay you are likely to encounter this year and takes the series to the next level. 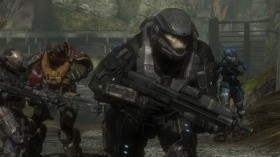 Reach is the home planet of the UNSC. Reach must be defended. With that in mind, you begin the campaign in a squadron tasked with defending Reach from the rapidly advancing enemy. The defence of Reach is where the game revolves, but as you would expect, the storyline contains many twists and turns before the absolute epic conclusion that is fitting for such a popular series. Halo: Reach will have you begging Bungie for more. They say that going out on top is the best way to go when you are popular, and this is exactly what Bungie has managed with this title.

The Halo gameplay itself remains much the same, so if you haven't liked Halo in the past, it is unlikely that you will warm to Reach. It still remains a case of moving from A to B while taking down a few enemies. There are no puzzles in the game with the action purely focused on the combat. Considering the advancements in technology and gameplay we have seen in the past decade, it is somewhat surprising that Halo can remain so compelling, but it does and you will find it very hard to put the controller down before finishing the game.

One thing that is clear during the campaign, however, is that the war in Halo has changed. No longer are you in small battles; sometimes lots of enemies are present on screen which brings home the epic nature of each battle. The cut scenes have also taken this to the next level with five or ten pelicans being displayed rather than just one. This goes hand in hand with Bungies new engine that has allowed them to make the biggest maps ever seen in a Halo game, and just increases the vast feel of the campaign mode.

If we had to offer one knock against the campaign, it would have to be the length. It is quite short and sweet, but from minute one to the end you are enthralled. 'Just one more mission' you will be uttering as the clock strikes three in the morning. The campaign also wraps up the series properly. Many times we see franchises end with lots of cliffhangers that are never solved and people argue on internet forums for no good reason about them. Halo: Reach does not do this.

Many things within the actual gameplay have been improved. There are new weapons on offer and not being Master Chief means that you are more vulnerable on the battlefield. Recharging health is gone with health packs littered throughout the world, and the shields are not as powerful as the green Spartans. You still can just run up to enemies and shoot them rather than take cover and hide, but nowhere near as much as you would with Chief.


Some of the new weapons are not used enough in our opinion, such as the option to call in airstrikes. It is clear that Bungie has looked at another of the most popular franchises around; Modern Warfare, and built what makes that game so good into its own megastar engine. Epic cut scenes, huge explosions, emotional stories and fast, quick gunplay is the order of the day in Halo: Reach and you will definitely want more than one helping.

However, perhaps the biggest improvement you will notice to Halo straight up is the graphics engine. Rebuilt from scratch, the engine allows the battles to seem more epic and a lot more graphic fidelity. In a word for Halo players, Reach is gorgeous. Gone are the blocky style textures that have no place in todays High Definition world. They have been replaced with crisp, improved textures and weapons models. The world just feels bigger and better and the graphics engine has a lot to do with this. Another key point is that Bungie has mixed up the gameplay this time around with space combat and flying levels. To take a risk with the last game they will produce in a series is a risk, especially with so many fans, but this risk has paid off. 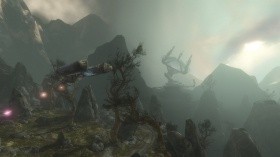 Once you move past the campaign mode, the rest of the game is also just as jam packed. Firefight returns from ODST with more weapons and maps than ever before. Firefight is a survival mode where wave after wave of enemies are thrown at you individually or in a group and until you succumb to the forces, you fight for survival. This is one of the more popular game modes on Xbox Live due to the fast paced nature of the format.

Aside from Firefight, the game modes previously seen in Halo 3 make a welcome return. Bungies award winning party system has been retained as well, allowing you to pair up quickly for games, and it still remains the standard in the industry for how multiplayer gaming on Xbox Live should be done. You can play capture the flag, deathmatch, slayer etc. just like the previous games and of course with modifiers that allow you to customise the games even further.

Halo has always been known for its multiplayer and this is no exception. Reach also heralds the return of the Forge game mode. Forge for those who didn't play Halo 3, allows you to build your own levels and then play those maps amongst friends. The feature has been refined even further allowing you to build bigger and better maps in Bungies new Halo engine.

Halo: Reach is a game that any Xbox 360 owner really needs to own. It represents one of the best value titles to be released in 2010 with the content available and takes Halo to a status where as a gaming franchise it will probably not be forgotten. Bungie has managed something that few entertainment artists manage to do. They have gone out on a high and delivered what amounts to be the best game in the franchise to date. There will be more Halo games no doubt, but it won't be the same. Bungie had the magic touch on this franchise and like Call of Duty, when built by someone else it most likely won't feel the same. Goodbye (Bungie) Halo, we'll miss you, but at least you went out on top.