All NewsBusiness, Financial & LegalCases, Cooling & PSUContests & GiveawaysCPU, APU & ChipsetsDealsDisplays & ProjectorsGamingMotherboardsScience, Space, Health & RoboticsStorageVideo Cards & GPUsVirtual & Augmented Reality
All ReviewsAll ArticlesAudio, Sound & SpeakersCases, Cooling & PSUCPUs, Chipsets & SoCsComputer SystemsDisplays & ProjectorsGamingMotherboardsNetworkingPeripheralsRAMStorageVideo Cards & GPUs
GuidesGamingGPUsSSDsNewsletterAboutPrivacyForums
PlayStation 5 ProRX 7900 XTXAMD Zen 4RTX 4090RTX 4080RTX 4070GTA 6Elon MuskHDMI 2.1
Jetpacks; something which has fascinated man for a number of decades has also been prominent in film and video games over the years. The fact is if you have something rather boring and add a jetpack, it all of a sudden seems a lot less boring. That is the ethos behind Dark Void, a third person action shooter from Capcom set in World War II. There are a few things Capcom did right with this game such as releasing it in the quietest time of the gaming year, but also a lot they did wrong which unfortunately leaves Dark Void a rental at best.

Dark Void tells the story of young William, who along with his lady love is involved in a plane crash somewhere in South America. With their urge to survive kicking in, Will and his love whilst running through the forest discover an ancient race known as 'The Survivors' who are overseen by the watchers, a hostile force from another dimension. Early in the game Will meets Niklas Tesla who has invented the jetpack and from there the game kicks off. The game then turns into one that couldn't be more predictable if it tried. 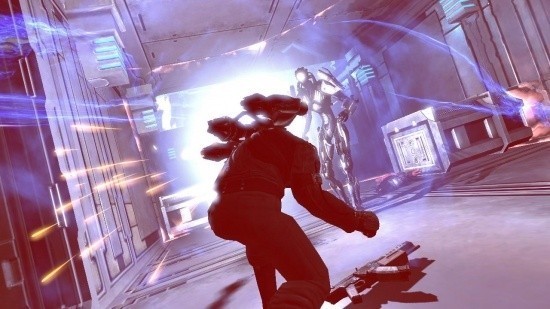 As mentioned before, Dark Void is a third person action game with a lot of flying elements. Perhaps the biggest problem with this game is that the first sixty to ninety minutes do not involve the jet pack and instead some of the more mundane third person shooting action you will see for a while. The game reminds us a lot of Gears of War without the polish in this aspect and we are sure that some gamers will turn it off before the jet pack even shows itself after the prologue missions.

Once you do acquire the jet pack the game does become a lot more interesting. The developers of this game worked on Crimson Skies and it shows. The control and dog fighting with the jet pack is some of the best around and when you manage to jack some of the enemy ships the game really comes into its own. It really is as if Gears of War and Crimson Skies got together and had a baby. A jack of all trades which is the master of none is the best way to describe Dark Void. 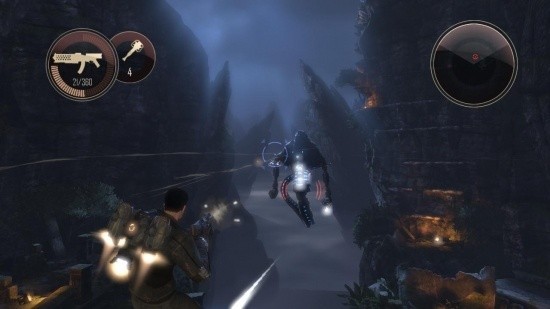 As you would expect with a jet pack involved, the levels are large and quite detailed with many jumping puzzles. We found that the game quickly degenerates into a jumping puzzle, small bits of combat and then a large action sequence where Will must take on either a boss or a number of enemies. This doesn't let up and the repetitive nature of the title really hits home a few hours into the game. Those who make it to the end may wonder what was the point whilst others, in fact most others, will turn it off by the time the end credits roll. 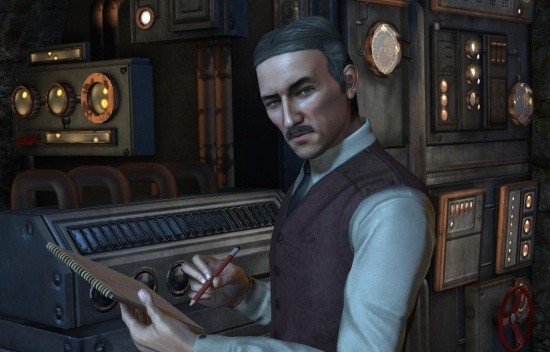 Where the game somewhat excels and is different is the mixture of combat on offer. If you as Will try to run and gun through the game you will find yourself having a tough time, but utilize the unique aspect of aerial combat with the jet pack and the game will be kinder to you. At first this can seem incredibly fun and different, but the game just doesn't mix up the game play enough to leave you wanting to come back for more. We struggled to play through this for review after the first few hours as the monotony of it all was just so apparent.

For a 2010 game the graphics also disappoint with grainy textures used and pop-in very much apparent. The character models are well done, but the lack of variety with the enemies and survivors does not help and the world in which the game plays out is a lot of bland browns which is in stark contrast to the start of the game in the lush jungle. Voice acting leaves a lot to be desired as well with some incredibly cheesy lines and we just can't help but hear Nathan Drake from Wills voice (He is voiced by Nolan North who also is the voice actor for Naughty Dogs mega star). 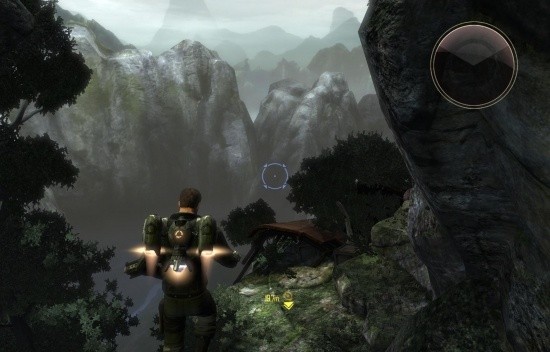 For a game of this nature to not have any multiplayer, it has to be good and exciting and Dark Void is neither. It is the crux on an extremely good idea which for one reason or another has had a poor execution and as such is not that fun to play. With a bit more mixing up of gameplay and some twists and turns, Dark Void could have been a lot better. As it is, it's hard to recommend Dark Void as more than a weekend rental.