Last week I attended an AMD briefing at their new Santa Clara headquarters, complete with a Jim Sanders bust, where AMD introduced their brand new Ryzen Pro Desktop and Mobile processors with Radeon Vega Graphics. AMD's Ryzen Pro processors are designed to compete with Intel's Xeon lineup. However, AMD has taken things to the next level and has added in their Radeon Vega graphics for the iGPU on the processors. 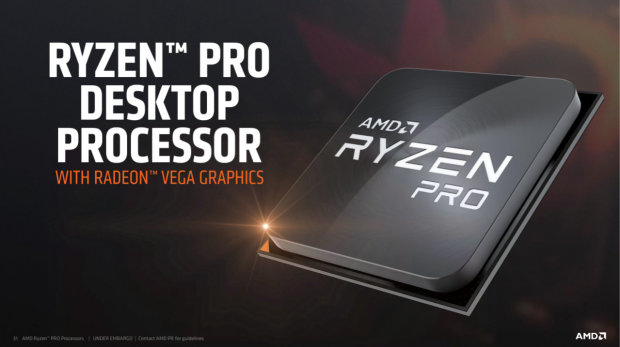 In 2017 AMD added over $1 billion in sales YoY compared to 2016, and the PC is still AMD's biggest market. In 2017 Q3 AMD says that they had 40% market share in certain market segments, so we are excited to see how they will pump up competition in 2018. Using low power APUs is great for enterprise since power consumption is a big deal to large corporations. The addition of the Vega graphics makes thing interesting since now people can play games on their work PCs. AMD is trying to make their offering very versatile, and the Vega graphics do make that happen. 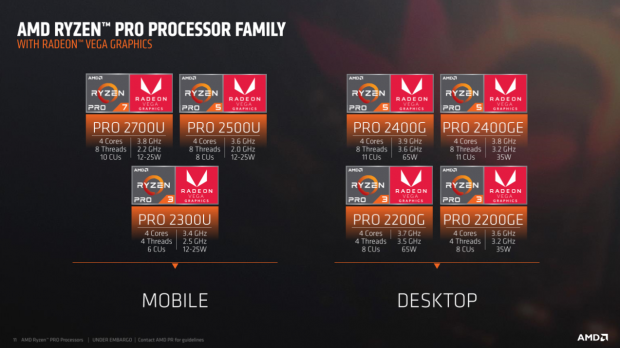 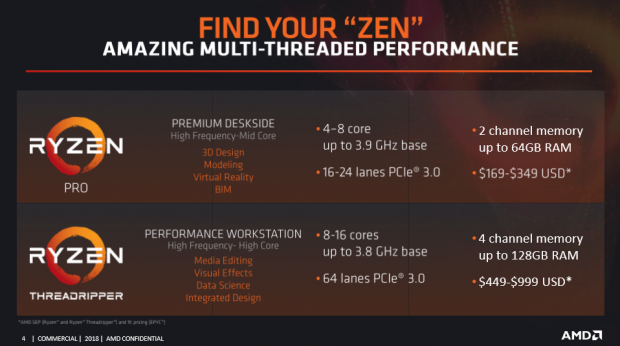 For the more powerful desktops, AMD offers Ryzen Pro CPUs up to 8 cores, and Threadripper up to 16 cores. These are already available, and there will be updates to both this year, and Thread Ripper 2nd generation is also sampling. 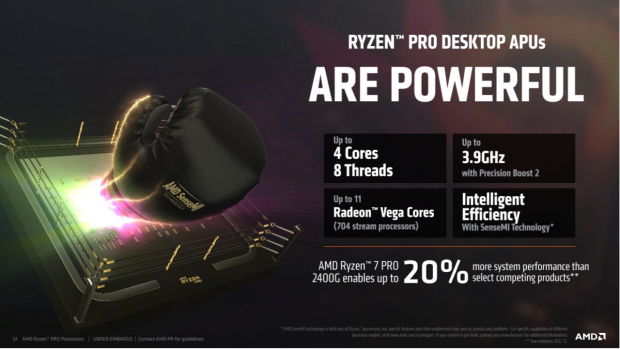 The new Pro APUs are rated up to 4 cores 8 threads, up to 3.9GHz with Precision Boost 2 and mobile XFR, up to 11 Radeon Vega CUs, and they should offer up to 20% more performance than competing products. 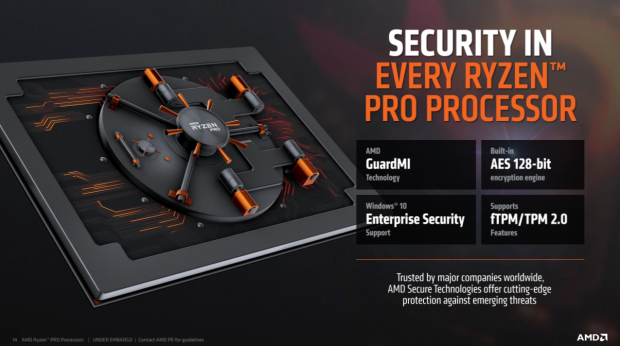 The one thing that every Ryzen Pro CPU offers is hardware-based security measures. Each Ryzen Pro processor has a dedicated security processor, GuardMI, AES128-bit encryption engine, enterprise security support, and support for fTPM/TPM 2.0. 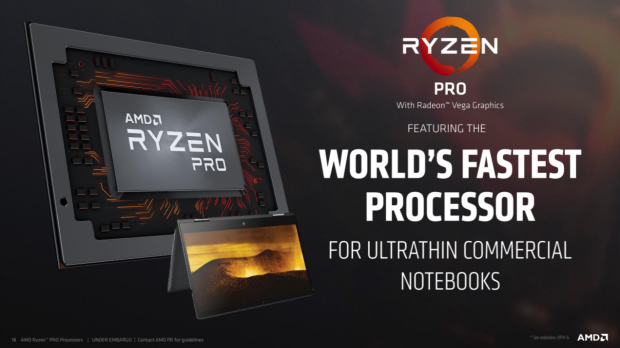 AMD calls their new Ryzen Pro CPU with Radeon Vega graphics the world's fastest processor for ultrathin commercial notebooks. However, let's cover security features first and then get into the performance. 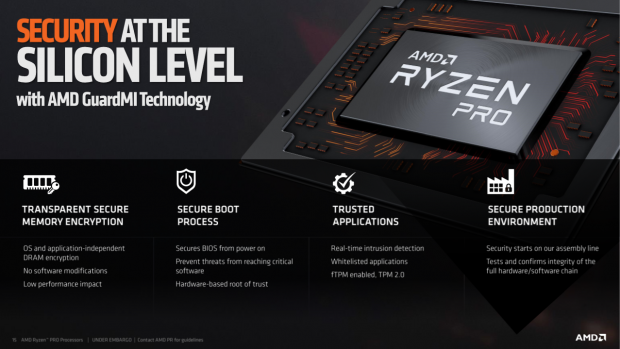 At the silicon level, GuardMI technology offers many different features. Transparent secure memory encryption, secure boot, support for trusted applications, and a secure production environment are what AMD has to offer. 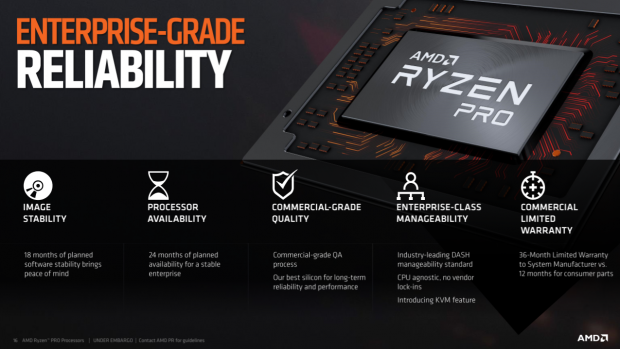 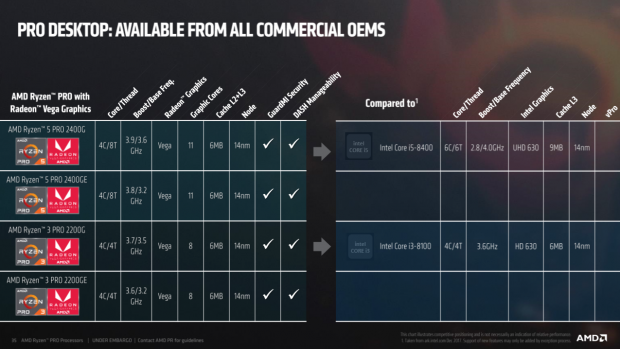 AMD is positioning their processors on the desktop side to directly compete with the i5-8400 and i3-8100. With the better Vega graphics, AMD has a real advantage if integrated graphics are depended on. 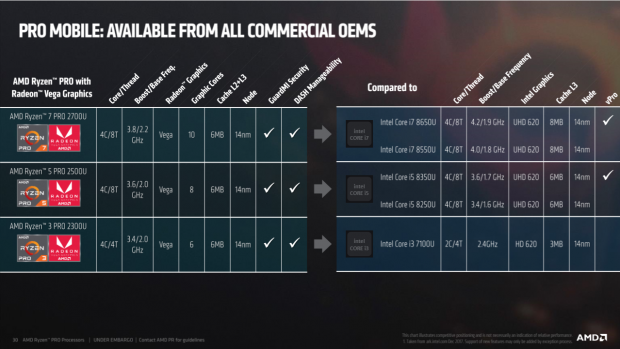 On the mobile side of things AMD is taking aim at five Intel processors, four of them are 8th gen mobile core processors, one of them is a 7th generation i3 . 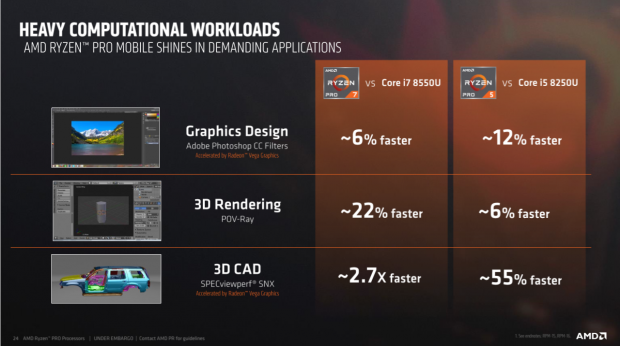 AMD is also claiming that in workstation use cases the new mobile processors are anywhere from 6-22% faster. It's very important since AMD is targeting enterprise and government organizations rather than consumers. 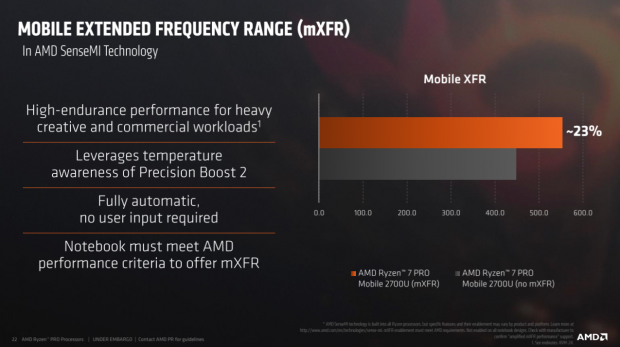 Along with Precision Boost 2 which raises core frequency dynamically based on thread load, the CPUs also offer mobile extended frequency range (mXFR). MFXR offers boosting based on cooling capabilities of the notebook. 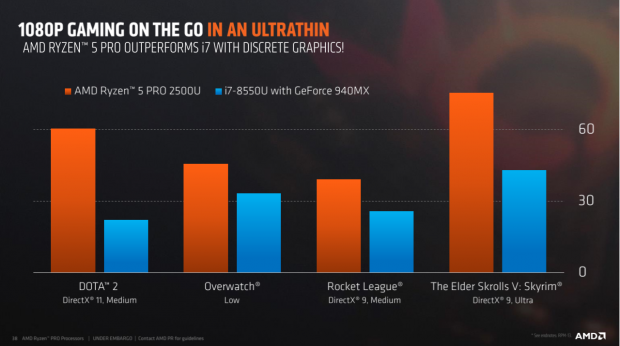 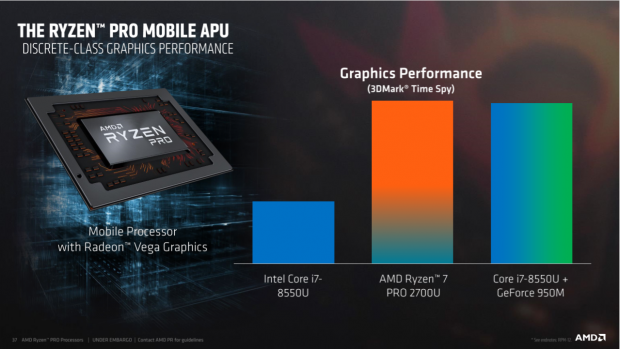 Here we see it up against both Intel CPUs with discrete and integrated GPUs, it does very well. 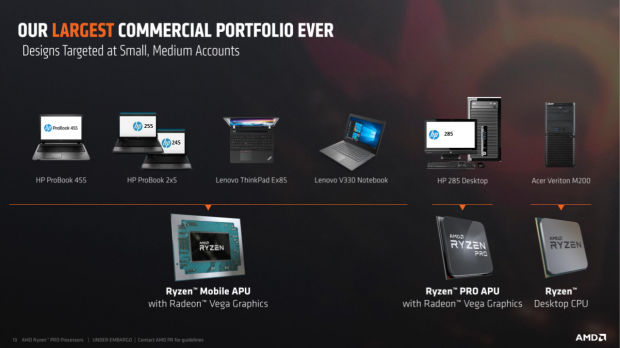 Dell, HP, and Lenovo have been working with AMD for a while to get a new line of products ready to hit market ASAP. 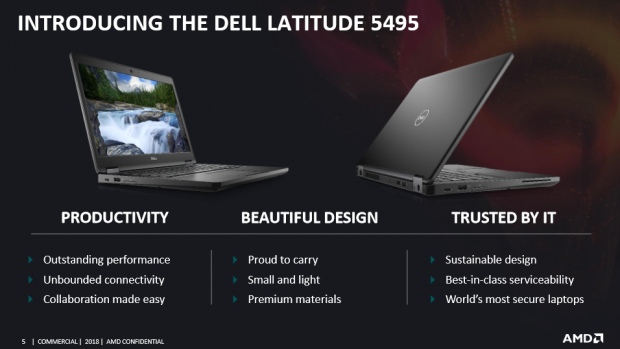 Dell will offer the Latitude 5495 notebook with the new mobile APU, and it's designed for work and play. 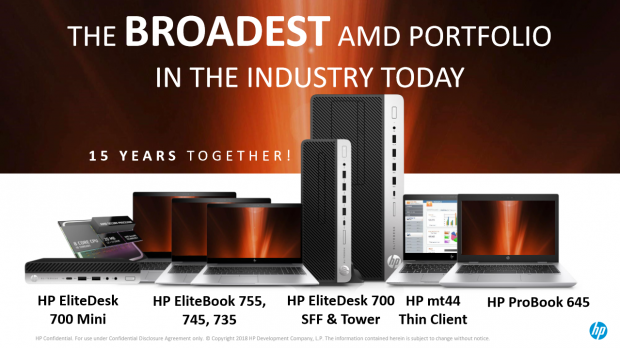 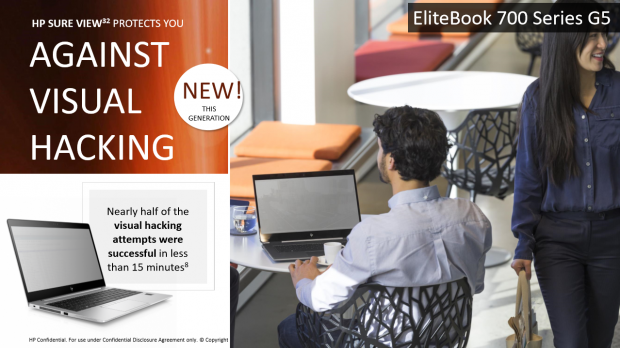 HP is going to offer notebooks and small PCs. We see an HP EliteDesk 700 Mini, EliteBook 755, 645, and 735, EliteDesk 700 SFF & Tower, mt44 Thin Client, and the ProBook 645. They also have an integrated feature to make looking at the notebook's screen from an angle almost impossible. 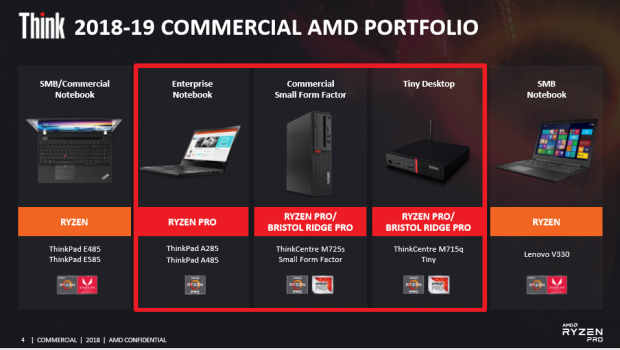 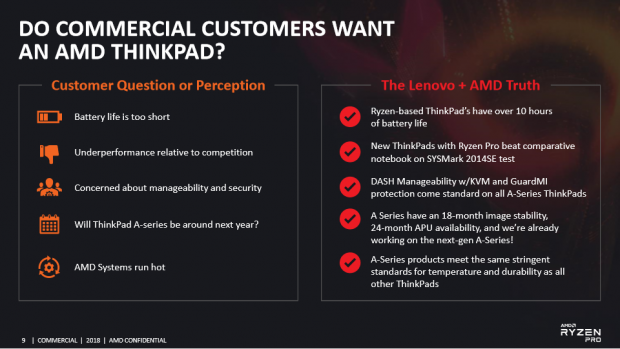 Lenovo is offering up new notebooks and mini-PCs. These include the ThinkPad E485, E585, A285, and A485. The ThinkCentre M725s and M715q and Lenovo V330 are also going to hit the market. Lenovo made a nice little chart, which points out AMD strong points.

Xeon Was Great, So Was Coal 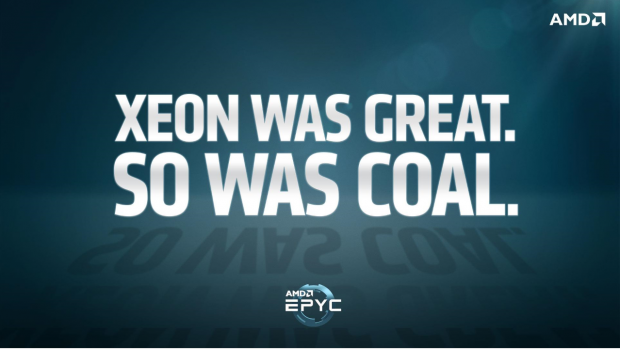 One of the coolest marketing slogans will hit billboards near you soon. 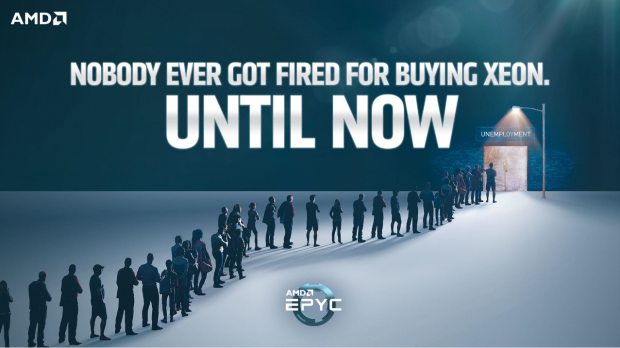 Some intense marketing/PR from AMD. 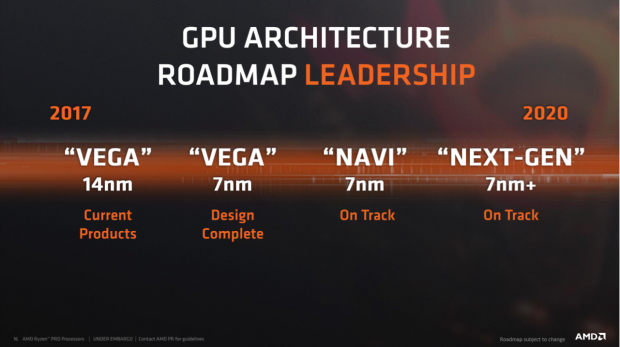 Here we see that AMD is on track for 7nm and 7nm+ GPUs. 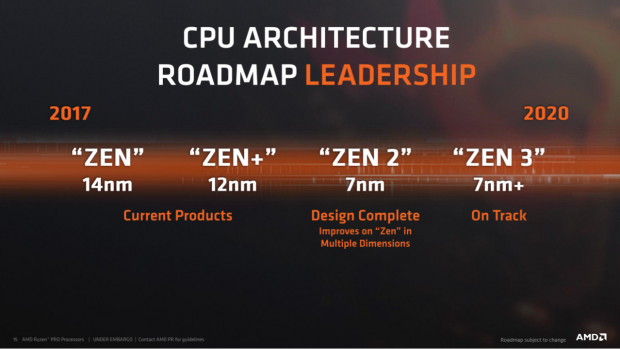 AMD also made sure to let us know that Zen 2 and Zen 3 are on track and 7nm and 7nm+ are on track for AMD CPUs as well. 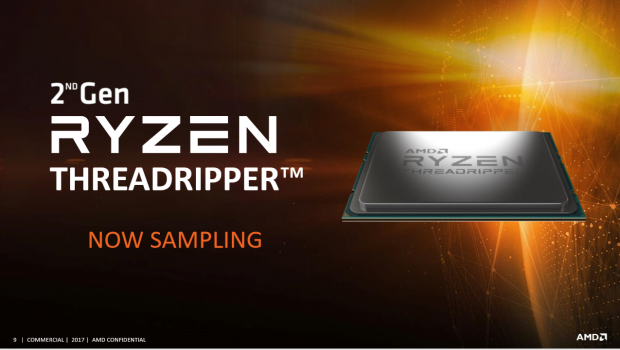 AMD's 2nd Generation of Threadripper is also on track, and is now samples to AMD's partners.