What Is Deus Ex?!

The original Deus Ex is one of my favorite games of all time and a huge influence on me, and what I expect as a gamer. Warren Spector is the brain behind the franchise, and he's worked on some of my other favorite games like the Wing Commander games, System Shock (that would be in my top 5), Crusader: No Remorse, and more.

Deus Ex was released in 2000 to critical acclaim, as it combined the first-person shooter style we knew and loved in the 90s, with stealth, RPG elements, and a grand conspiracy storyline that was awesome at the time. It was followed by a sequel in 2003 called Deus Ex: Invisible War, which didn't live up to the original, and then three prequels - Deus Ex: Human Revolution (which was awesome), Deus Ex: The Fall (forgettable) and now, Deus Ex: Mankind Divided.

Deus Ex: Mankind Divided is set in 2029, two years after the events that took place in Human Revolution and the "Aug Incident", where mechanically-enhanced humans were uncontrollable and violent. The Illuminati received implanted technology that was designed to control them through their augmentations and is abused by a rogue Illuminati member that wants to rid the world of augmentations.

I used the following cards:

I've tested a bunch of cards at 1920x1080, 2560x1440, and 3840x2160 - but if you guys want some 3440x1440 results for UltraWide gaming goodness in Deus Ex: Mankind Divided, let me know and I'll run that soon and get some results up. I'll also be doing another article on Mankind Divided once DX12 support is here, to see if we have performance improvements on these cards. 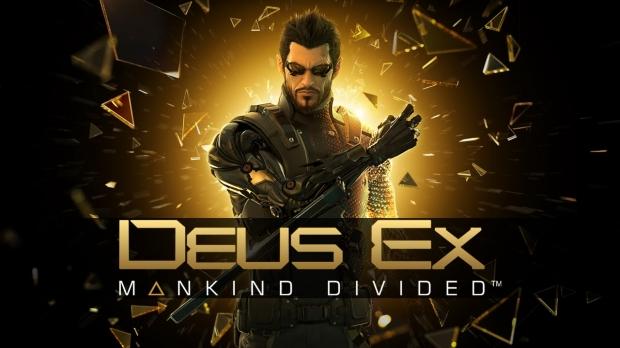 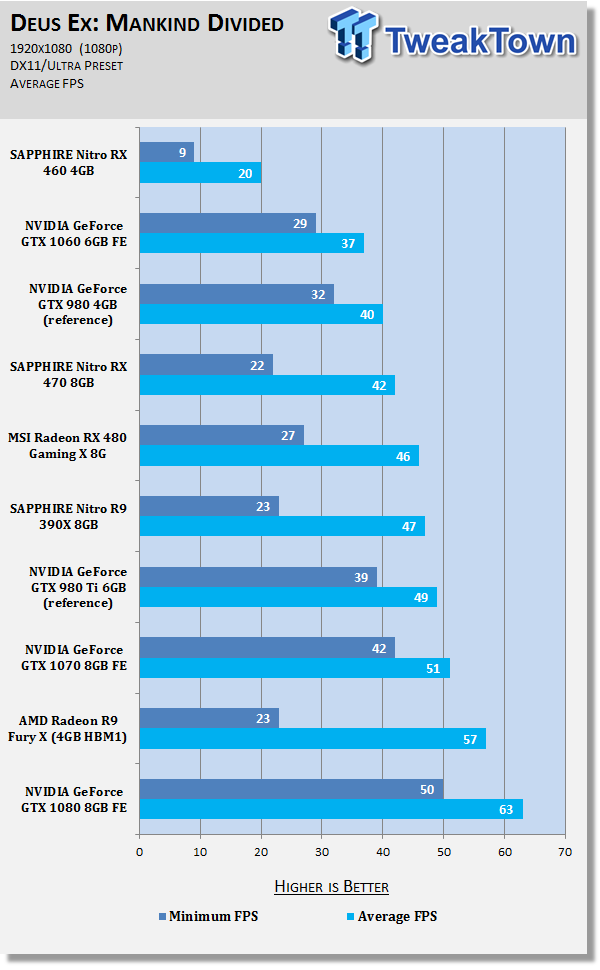 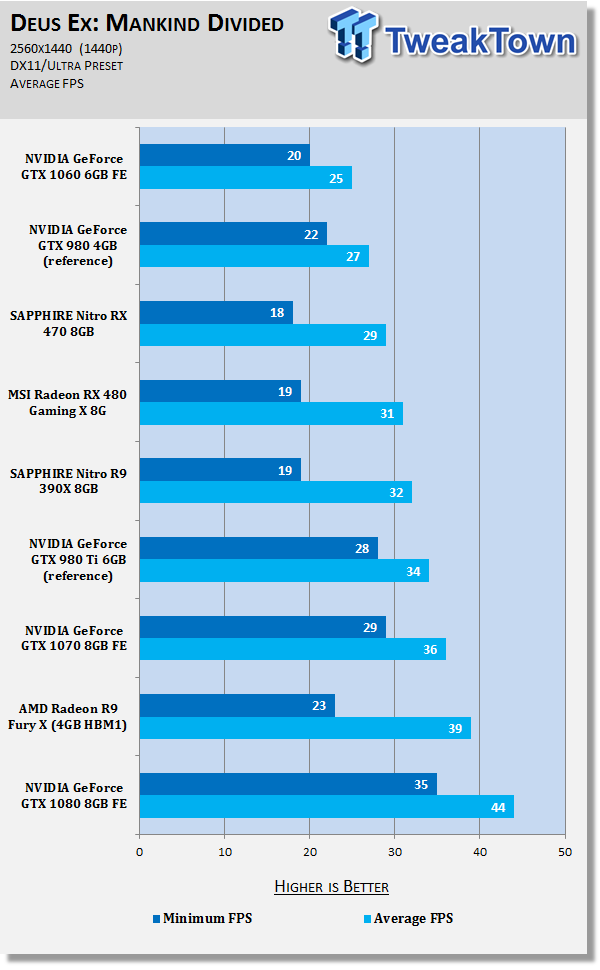 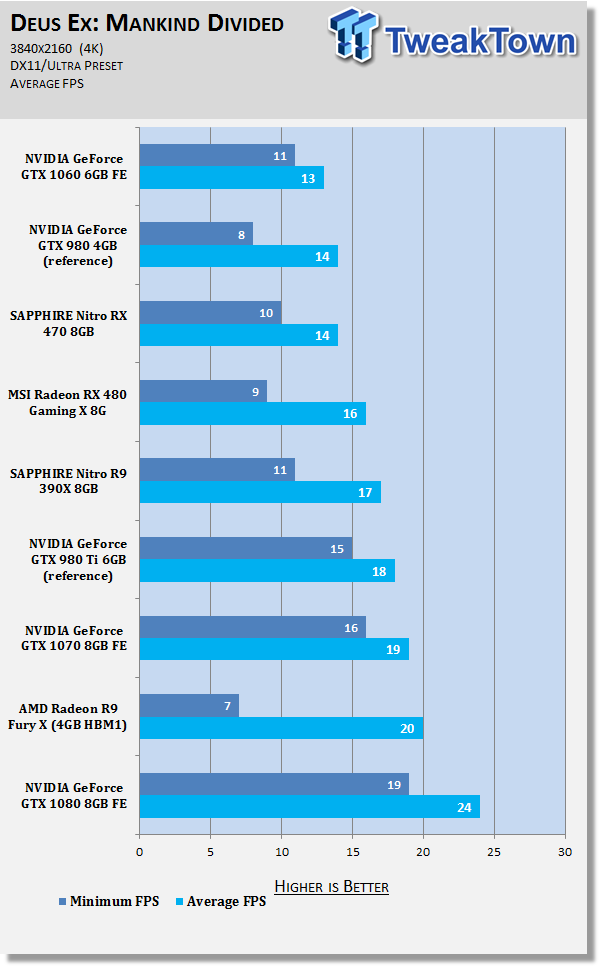 Deus Ex: Mankind Divided was promised to launch with DX12, but the developer missed the mark and now promises the DX12 patch in the coming weeks. We should expect there to be a nice bump in performance for Mankind Divided in DX12, and it'll be interesting to see how far it pushes AMD into competing even stronger against NVIDIA.

As soon as the DX12 update is pushed out, I'll re-run all of the tests again under DX12 and write it up. I can't wait to see the results.

I wasn't going to test the Radeon RX 460 since it really is a low-end card, but low-end graphics card owners play games, too - right? I benched all of the cards at all resolutions on the Ultra preset, disabling anti-aliasing on all tests. The Radeon RX 460 still pumps away with 20FPS average, and could easily handle 30FPS average with some tweaks to the visual settings, like dropping down to the Medium preset.

This is where things get more fun, as more stress is applied to the graphics card - but who comes out on top? Once again, we have some impressive results from AMD, with the Radeon RX 470 even beating out the GeForce GTX 1060 - and the Fury X with some more surprising results, beating everything but the GeForce GTX 1080.

The real battle happens in the high-end area, with the HBM1-powered R9 Fury X beating the GTX 1070, and only 5FPS average away from the GP104-powered GeForce GTX 1080. The 4GB of framebuffer begins to suffer on the R9 Fury X, with lower minimum frames than the GTX 980 Ti, GTX 1070, and GTX 1080 graphics cards.

This is where the fun begins, and none of our cards, the GeForce GTX 1080 included, can manage 30FPS average in Deus Ex: Mankind Divided. 30FPS average is the absolute bare minimum for me to personally recommend that you play at, and nothing is capable of that right now.

NVIDIA's GeForce GTX 1060 Founders Edition spits out just 13FPS average, while the RX 470 plods along with 14FPS, and the RX 480 with 16FPS average. AMD's Radeon R9 Fury X suffers more here with its minimum frames, with just 7FPS minimum - the lowest on our benchmark charts at 4K, even against the RX 470 and GTX 1060.

NVIDIA's fastest consumer graphics card in the GeForce GTX 1080 can't even manage 30FPS average, with just 24FPS average at 4K in Mankind Divided. Seeing this makes me want to try out SLI and CrossFire results, and I'm hoping that performance improves with the upcoming DX12 patch - although, I have a big feeling AMD is going to walk away as an even bigger winner. 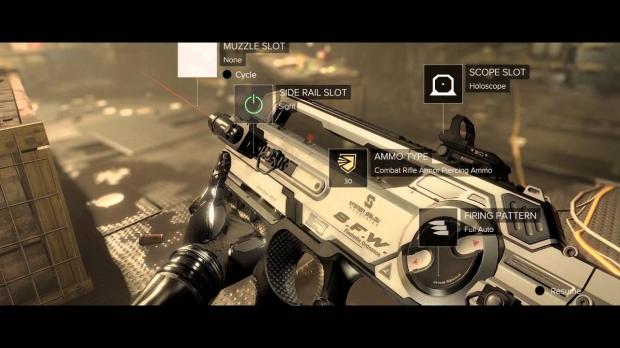 The Radeon RX 470 is capable of 42FPS average in Mankind Divided at 1080p, so with a few detail adjustments, you could hit 60FPS average. NVIDIA's own GeForce GTX 1060 Founders Edition pushes 37FPS average, which has AMD in the lead without a problem. The lead is extended with the RX 480 at 1080p, with 46FPS average.

The older, hotter, more power hungry Radeon R9 390X has just 1FPS more than the new, Polaris-based RX 480 - a huge improvement over the years for AMD, and now with Deus Ex: Mankind Divided.

Increasing the resolution to 2560x1440 still has AMD performance sitting in a very impressive place, with around 30FPS average for its Radeon RX 470, Radeon RX 480, and Radeon R9 390X. NVIDIA's GeForce GTX 1080 performs quite strongly at 1440p with 44FPS average, so again - with some adjustments to the in-game visual settings, the GTX 1080 could reach 60FPS average without a problem.

Next up: Multi-GPU battles in Deus Ex: Mankind Divided, and I'll also throw some more cards into the benchmarking mix like the Pascal-based Titan X. I'm also going to try and get some 3440x1440 results in Mankind Divided, too. Stay tuned, folks!