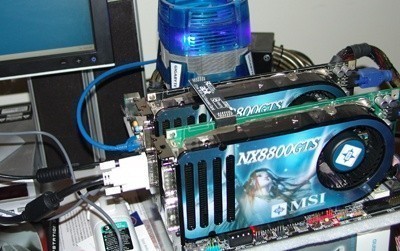 We have had a look at the 320MB nVidia GeForce 8800GTS graphic card offering a few times here at TweakTown in the past - we have looked at it in its stock form, overclocked and in SLI. It's a fantastic card and doesn't disappoint but in our first article we mainly focused on how it compared against the 640MB in single card configuration. Today we are going to be re-focusing on this situation but when the cards are used together in SLI mode.

With in excess of 1.2GB of memory on offer when the 640MB cards are enabled in SLI mode, you have to wonder are we simply at a point of overkill. Are the 640MB cards for non-SLI and the 320MB cards for SLI? These are some of the questions we hope to answer today.

While some companies have pulled the 640MB card from production, there are still a large number of companies offering them till this day. We almost had everything we needed for the article originally, with a couple 320MB cards from MSI in hand and a single 640MB we were close but not close enough. With an email or two later to MSI, a second 640MB arrived on our door step and we had only just one single mission for it - test it in SLI with our originally 640MB from MSI and see if moving to SLI dual graphics technology is actually worth it or not.

We won't be going into any detail on the cards as we have seen what they are capable of more than a few times now (here and here); this is purely a performance analysis and we won't be wasting anytime messing around with the usual particulars.

So we will have a quick look at our test system setup and get stuck straight into the benchmarks results from the different configurations.


As we mentioned, as this is a performance analysis, we will be getting straight into the benchmarking, bypassing all the usual pleasantries.

We will be using our normal line up of games and as the graphics cards are clearly at the higher end of the table we are testing at the maximum PC resolution of 2560 x 1600 to really see what the different configurations are capable of producing.

All of the graphics cards on hand today are from our friends at MSI - two utilize 320MB of memory while the other two utilize 640MB. We saw that the 640MB consistently took the lead of the 320MB counterpart in our single non-SLI testing. We are here today to find out what happens when we put the same cards into an SLI mode configuration. All the graphics cards are exactly the same (same clock speeds and so on) just the amount of memory is different.

At the lower resolution the 640MB cards sit just behind but when we move up in the resolution table we can see that it is able to take a slight lead over the 320MB variant.

We can see here across the board that the 2 x 640MB 8800GTS combination is faster, and quite significantly, its more than just fluctuation... and it's consistent at this stage.

Non-HDR tests don't really see a difference but our HDR tests see again the 640MB combination take a lead with it being quite a significant one at the lower resolution.

PREY being as intensive as it is sees that the extra memory comes in handy and again gives us a nice lead over the 320MB cards but both configurations offer quite a playable experience.

For the first time we see a bit of a role reversal here, the 320MB offerings seems to be consistently faster in both resolutions which is quite unexplainable (probably driver issue).

The extra memory again comes in to play in Company of Heroes and especially at 2560 x 1600 we can see that the cards can actually perform fairly well unlike the 320MB configuration, which doesn't really offer a pleasing gaming experience.

As you would expect with AA and AF enabled we continue to see an increase in performance for the 2 x 640MB 8800GTS graphics cards but probably not as large as we expected.

Lost Coast HDR performance again sees performance in leaps and gains with the 640MB cards. Here the 2 x 320MB cards are unable to cut the cheese and do not offer a solid gaming experience.

We leave with PREY and as you would expect like our non HQ tests it sees a performance gain as well when the 3D intensive load is increased.

To be completely honest, we didn't really know what to expect performance wise going into this article. While the 640MB graphics card did perform better in a single card showdown, when you move to SLI mode and give the 320MB an extra 320MB via the second card, are we going to be maxing out the amount of memory we really need? Surely hitting in excess of 1200MB of onboard memory would just be useless?

Actually, it doesn't seem that way. We can pretty much see across the board that the 640MB cards in SLI continue to give us a performance increase when compared to the 320MB versions. Money permitting we would always suggest that you make the move to the 640MB card if you're running resolutions in excess of 1600 x 1200, closer to 1920 x 1200 and above.

It is all very interesting though considering you have graphics cards with the same chip, exactly the same core and memory speeds with the only difference being the amount of onboard memory but of course about a 33% price difference. It's clear a difference can be seen at these higher levels even when SLI comes into the picture.

Consumers listen up...the problem though is that people may well read this and then go out and buy the 512MB Radeon X1300 instead of the 256MB Radeon X1600 (for example) because the first model has more onboard memory. Yes, more memory does make a difference BUT... and this is a big BUT, you'll only see a difference when the right amount of power (clock speeds) is behind it. As most low-end graphics cards don't have any real advantage with the extra memory, think about this and listen to us and not the sales person who thinks they know everything.

We openly invite the companies who provide us with review samples / who are mentioned or discussed to express their opinion. If any company representative wishes to respond, we will publish the response here. Please contact us if you wish to respond.
Newsletter Subscription
Buyer Guides
Latest News
View More News
Latest Reviews
View More Reviews
Latest Articles
View More Articles
© 1999-2020. Tweak Town Pty Ltd. All Rights Reserved.
Executives from companies like
IntelAMDNVIDIAEAASUSMSI
receive our daily email newsletter.