Recently I had a look at some HDMI graphics cards, and discovered that getting your computer to display a proper HDTV signal isn't simply a question of having a card with the right connectors.

When you connect a computer to your TV using a digital signal like HDMI, the process isn't as seamless as connecting a dedicated piece of AV hardware, like a TV tuner or DVD player. This is because AV equipment makes automatic allowances for overscan whereas graphics cards don't. To fix this, there's a certain amount of manual tweaking required in the driver.

I wanted to compare AMD and nVidia's driver capabilities to get your system up and connected properly to an HDTV. The two cards used were an MSI NX7600GT Diamond Plus and Sapphire X1600 Pro HDMI. Both cards have native support for HDMI. 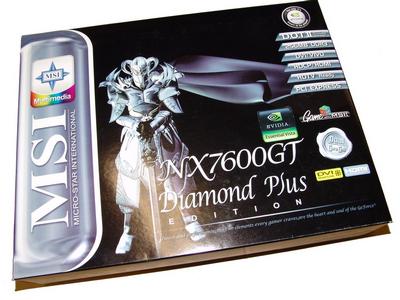 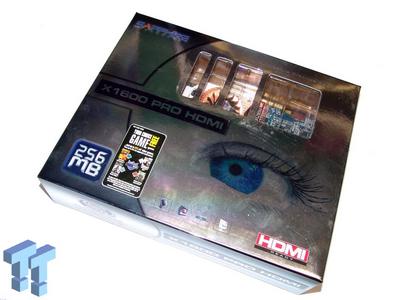 Let's get this show on the road and check out the process of setting up HDMI on your HDTV.

When you connect a PC to a TV using an HDMI connection, the edges of the displayed image are just off the screen. This is because the HDTV image standard being applied uses a technique called overscan.

Overscanning has been applied to all TV signals for at least four decades. It's a technique used to compensate for early TVs' inability to display a clear picture all the way to the edge of the display. The picture broadcast is actually about 5-15% bigger on all sides, which ensures that the entire display real estate is taken up and there are no visible black borders. If you were able to zoom the image back, you'd actually see a fair bit more of the image than you normally receive.

LCD and other fixed-pixel screens have essentially eliminated the need for signal overscanning, but not everyone has the luxury of a fixed-pixel TV in their living room. So television standards are still targeted at the lowest common denominator, and overscanning will be with us for a while yet.

PC video standards like VGA and DVI have the ability to detect the native pixel resolution of the monitor they're connecting to, and generally have no problems matching the exact pixel resolution. HDTV standards don't work the same way - they're not trying to match the screens supported pixel depth, they're just displaying the image as defined by the particular standard (composite, HDMI), assuming that no adjustment is necessary. So a computer attached to a TV by HDMI displays a full HDTV image with overscanning applied and the edges off the screen.

So when deciding to connect a computer to your TV, there's a trade-off between using it as a computer on a really big screen, or as a high-definition media input. If you want to use it as a computer, then the best visual results are with the VGA/DVI outputs. If you'll only be displaying digital media such as movies, then using the high-def component or HDMI outputs is the way to go.

If you want the best of both worlds though, then some correction is necessary. The computer will only display what it's told to display, and the TV assumes that there's nothing wrong with the incoming signal, so this is where vendor drivers from nVidia and AMD come into play.


Adjusting the display on an nVidia graphics card is done via the nVidia Control Panel. Access through the desktop right-click context menu, or from the Windows Control Panel. Then, select Video and Television. 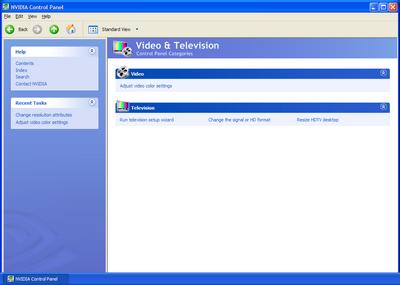 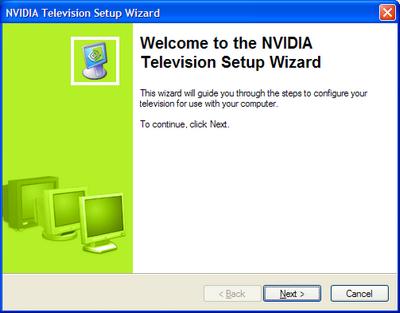 The wizard just steps you through the other available options in a standard wizard format. It's actually just as easy to go straight to one of the other two options.

Changing the signal or HD format essentially lets you choose which HD setting to use, like 768i, 768p or 1080i. Bear in mind that on a fixed-pixel display it doesn't matter which setting you choose, they will all need overscan correction to make the desktop fit the screen, so the decision is ultimately determined by the capabilities of the TV. Mine supports 1080i, so that's what I went with.

The main option here is Resize HDTV desktop. nVidia's approach is a very simple one - the resize screen has little distraction and the green arrows are cleverly laid across the white border to give you a very accurate measure of how much adjustment to make. It doesn't offer a fine degree of control though - the slider adjusts all four corners and maintains the aspect ratio, so you can't adjust one edge without affecting all of them. However, in my case it didn't matter - the slider adjusted the desktop to fit perfectly. 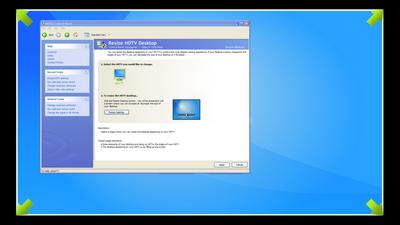 If you take a look at the image, you'll see the black borders surrounding the desktop. That's the overscan correction. Running at 1920x1080, that's how much of the image you don't see. This is demonstrated by the resulting resolution - 1824x1028. 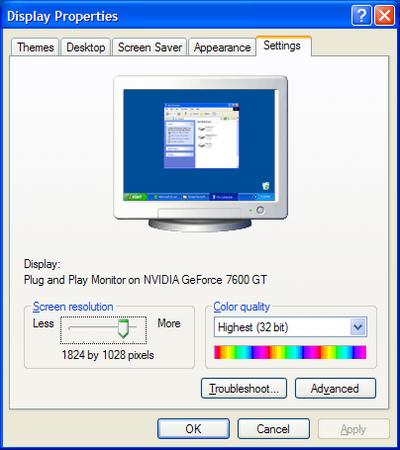 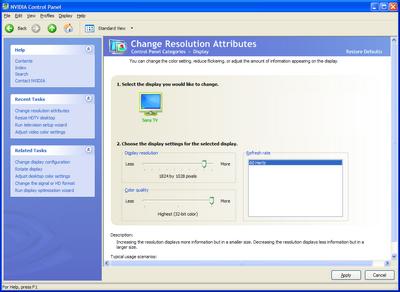 And from nVidia's perspective - that's all there is to it. Very easy and straightforward.


Controlling the display on an AMD / ATI graphics card is handled via the Catalyst Control Center - access this via the desktop, the desktop's right-click context menu, system tray icon or Start Menu folder. 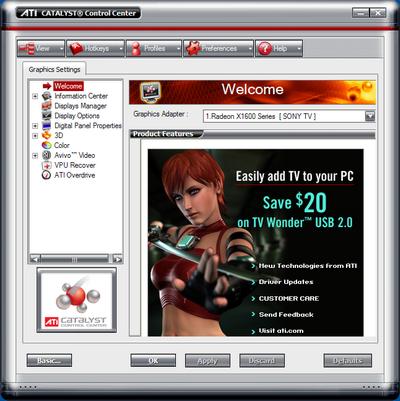 AMD's approach is a bit different to nVidia's, and to be honest, it's harder. The Catalyst driver comes loaded with pre-defined HDTV standards, and you can choose whichever one works best, but there's no easy way to resize the desktop like there is with the ForceWare drivers. Instead, you have to modify an existing preset and use it to create a custom one. 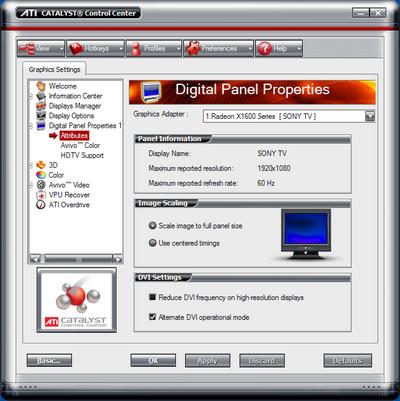 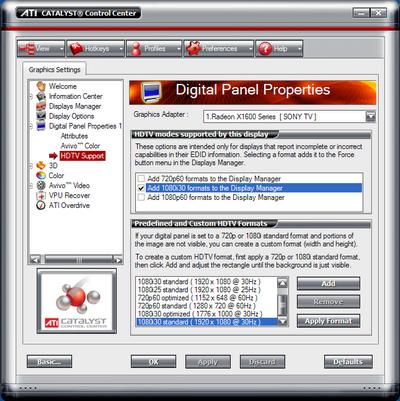 To do this, you have to be in the Advanced View in the Catalyst Control Center. In the left-hand navigation menu, expand Digital Panel Properties and click on HDTV Support. Choose the appropriate HDTV standard you want, then Apply. Don't choose one of the Optimized presets - always select Standard. The image will adjust but the edges will be off the screen. 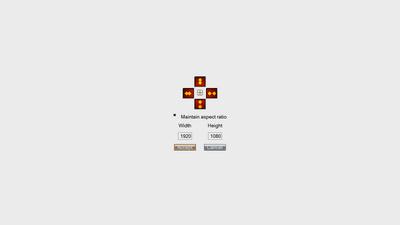 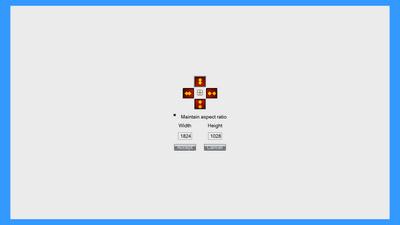 Then, highlight the preset you're going to customise and select Add, and you're presented with a resize screen. Unlike the ForceWare resize screen, the Catalyst screen adjusts opposing edges only, so you get a much finer degree of control. However, the image you're resizing is just a white screen on a blue background - no funky borders or arrows which actually make the job much easier. I had to get close up to the screen to make sure my adjustments were accurate. 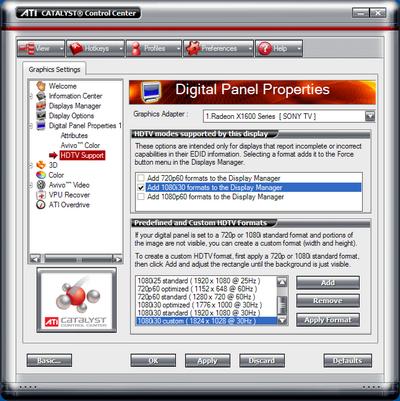 Once done hit Accept, and then Apply to save the changes. Then hit Apply Format and the screen resizes accordingly.

So, Which Was Better?

Although using both drivers achieved the same end results, nVidia ForceWare was much, much easier to use. Although I don't mind having to go through various advanced settings in a driver to get the right result, many people do and won't be impressed at the level of manual tweaking you have to do with Catalyst.

The biggest problem with the Catalyst approach actually had more to do with something I mentioned earlier in the article - resolutions. Because HDTV resolutions are greater than the TV's native resolution, the desktop image isn't very clear. When using the nVidia Control Panel this isn't much of a problem because the images are large, there's not much detail on each screen, and all the components are well laid out. With Catalyst Control Center, there's a huge amount of information to sift through, and when the image isn't particularly crisp it makes life much harder.

So for me, nVidia's implementation of HDTV support in its drivers is better - simpler, clearer and easier, and achieves exactly the same end result.