Apple unveiled its plans to leave Intel last November releasing the new Mac Mini, MacBook Air, and MacBook Pro with their in house M1 silicon. Adding to this, their recent announcements of iMac and iPad Pro with M1 only further their commitment to building their entire product portfolio in house.

With several notebook reviews under our belt with 10nm Intel Tiger Lake, we stopped at our local Apple Store this week, picked up the base model MacBook Pro 13, and brought it back to the lab. This MacBook Pro replaces our eight-year-old Late 2013' model that we used for testing Thunderbolt 2 until ~2016 when Thunderbolt 3 was introduced, and in this review, we will pit it against the latest low-power platforms from Intel that include the Core i5-1135G7, Core i7-1165G7, and Core i7-1185G7.

Specifications for our 2020 MacBook Pro 13" include the Apple M1 with 8 cores split between 4 high-performance cores and four efficiency cores, max clock speed is 3.2GHz, and it is built on the 5nm process. iGPU is an eight-core platform with added 16 core neural engine. Memory is LPDDR4X, 8GB in our MacBook operating at 4266MHz, while the NVMe controller adds 256GB of storage.

Connectivity includes two Thunderbolt 4 ports that support additional technologies, including USB 4, USB 3.2 Gen 2, and DisplayPort. A 3.5mm audio jack is available too, along with WiFi6 and Bluetooth 5.0. 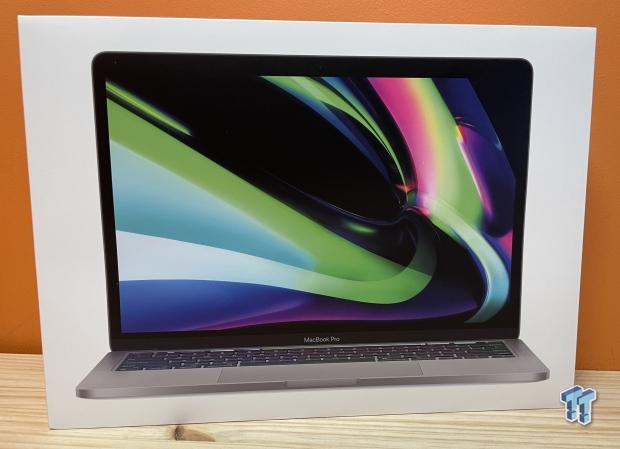 Packaging is quite colorful as with most Apple products. We have an image of the MacBook Pro on the front. 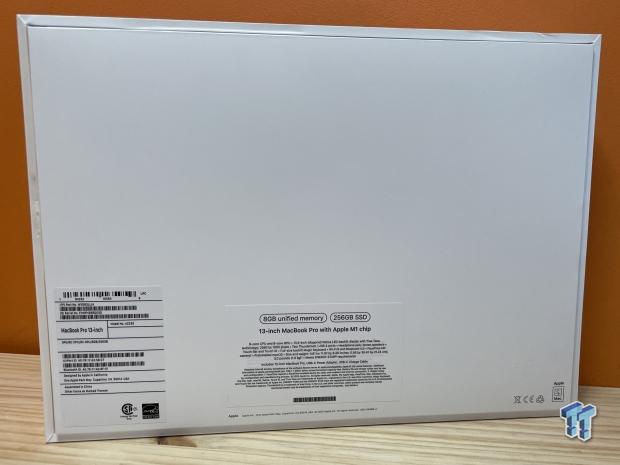 On the backside, we have model identification along the bottom, otherwise a blank canvas. 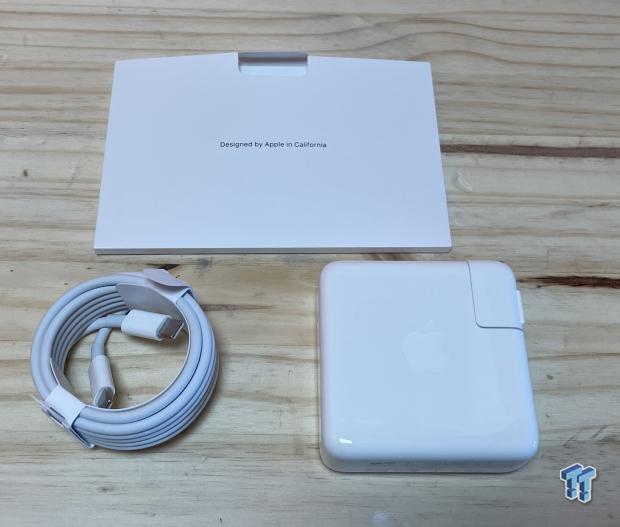 Included with the MacBook Pro, we have the 60w USB-C charger and USB-C cable. 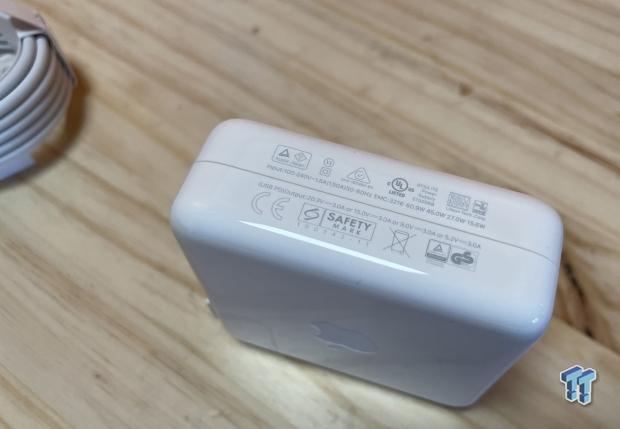 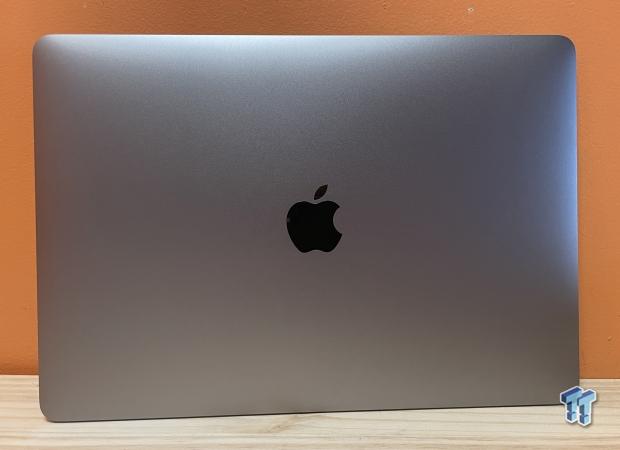 Our MacBook Pro was ordered in the Space Grey finish. This is an aluminum chassis with a darker metal finish. We have a simple Apple logo on the lid of the laptop. 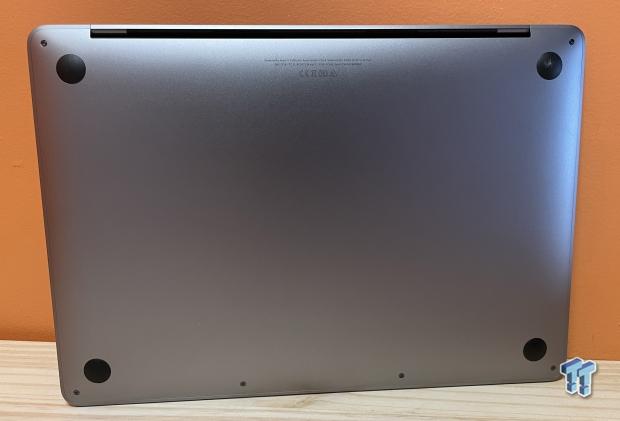 On the bottom, we have four feet to keep the aluminum base off your desk, model identification in fine print.

On the left side, we have Thunderbolt 4 ports.

On the right side, we have the 3.5mm audio jack. 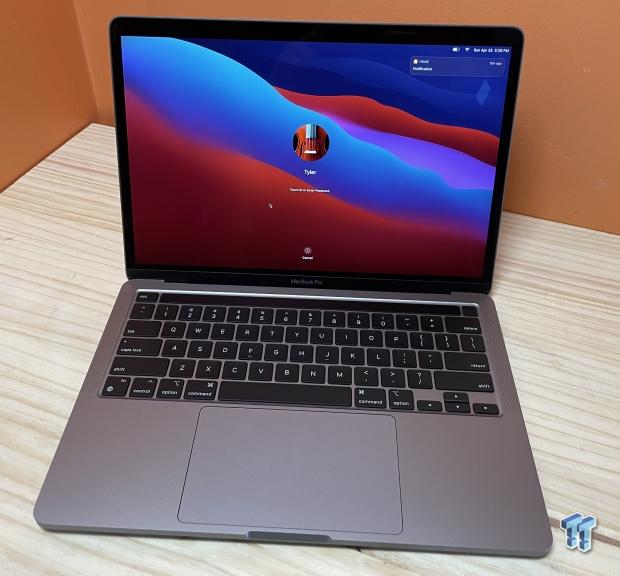 Opening the MacBook Pro, we have the keyboard with a touch bar. Down below, we have a centered trackpad. 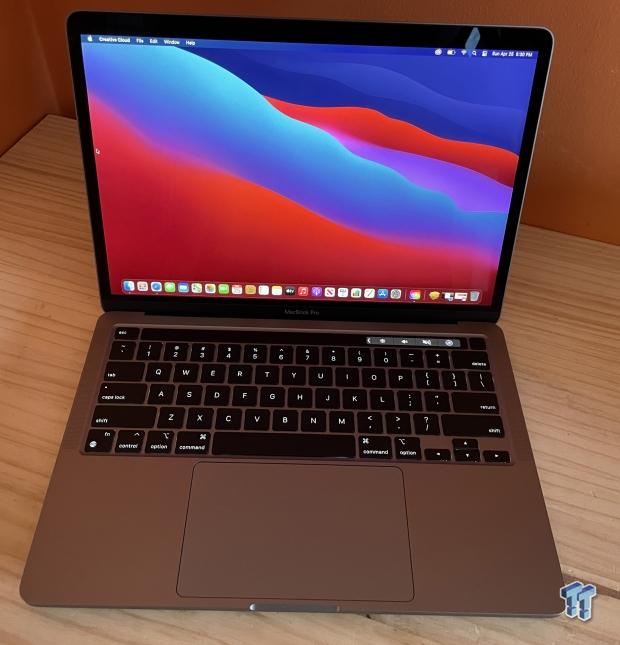 With the lights turned down, we can see the backlit keyboard in white. 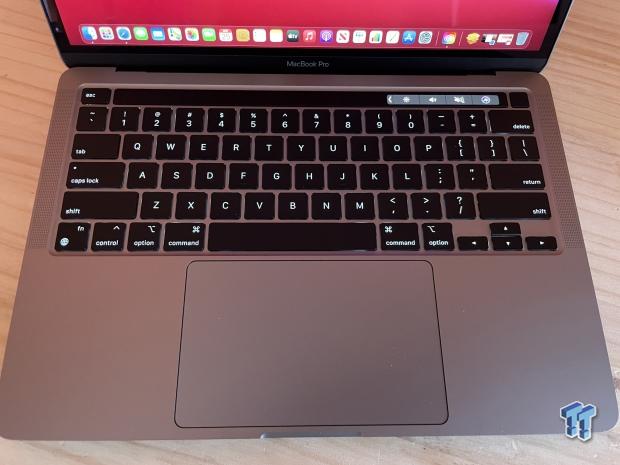 The touch bar offers shortcuts based on the application in use. This includes customizable macros. 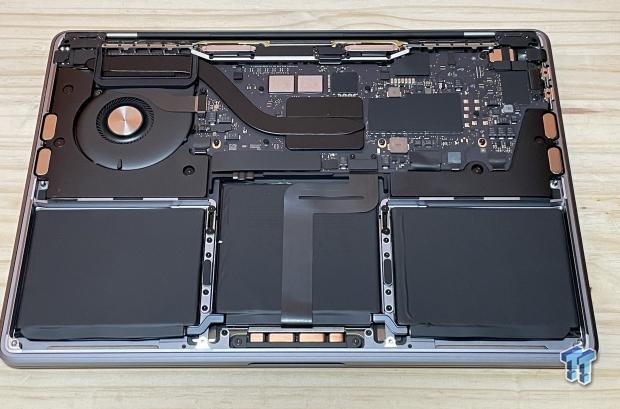 Opening the MacBook Pro, we have a split battery setup in three sections. Cooling is pushed off to the left with the M1 motherboard to the right. 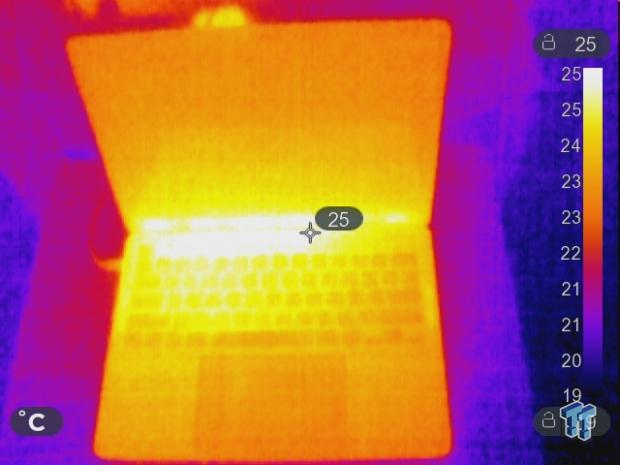 Thermal images show heat on the right side of the MacBook Pro as expected, 25c at peak. 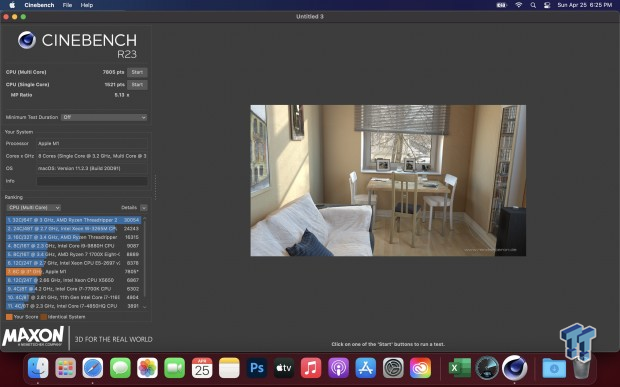 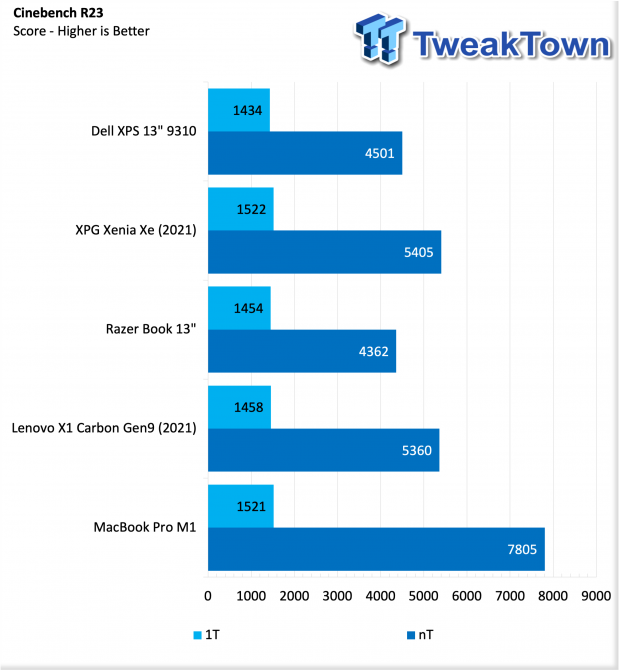 If we compare M1 to past laptop platforms, we see equal performance in single thread to 1165G7 in the Xenia Xe while beating the 1135G7 in Razer Book and 1185G7 in the Lenovo X1 Carbon. 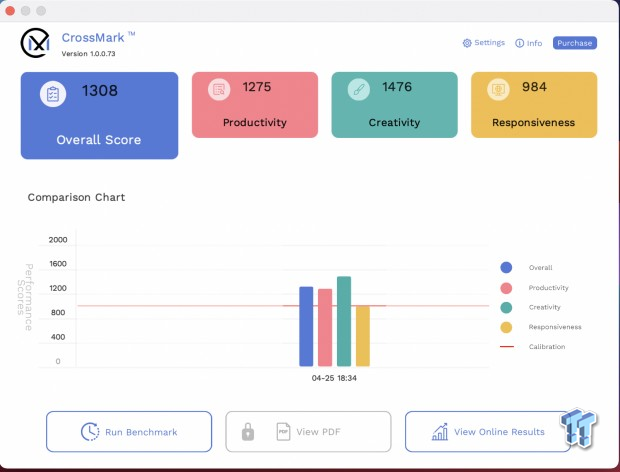 CrossMark gives an overall score of 1308 with a breakdown of 1275 in productivity, 1476 creativity, and 984 for responsiveness. 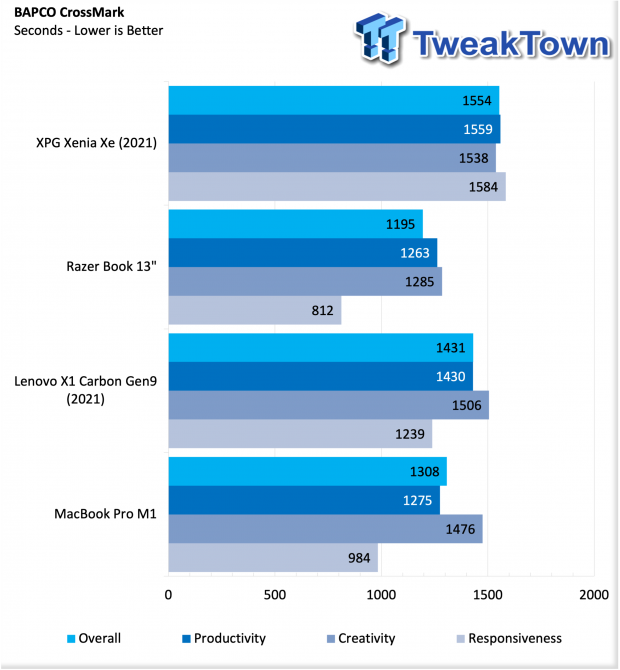 If we compare these results to our Tiger Lake platforms, we see M1 performance slightly higher than Razer Book 13 with the 1135G7 but a bit under the Lenovo X1 Carbon with the 1185G7. 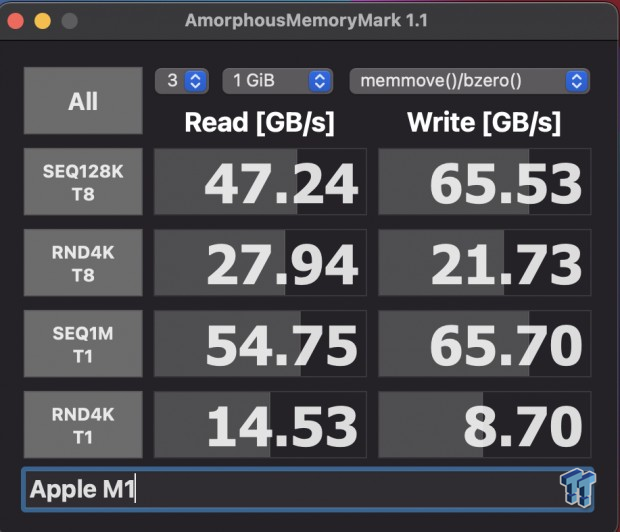 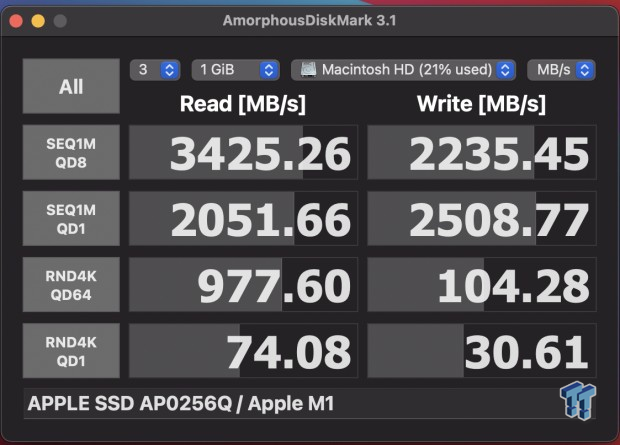 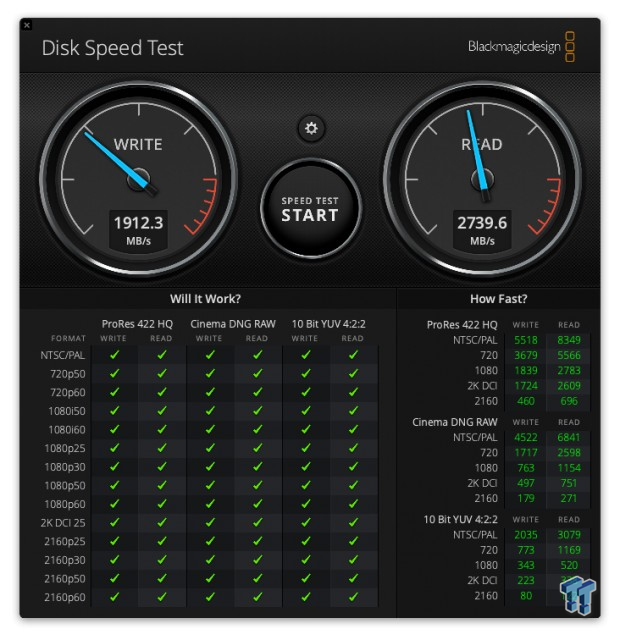 While I routinely upgrade the PCs in my home with the latest components, it has been seven years since my last MacBook Pro, and if I'm honest, I'd still be using it if the external connectivity was still relevant. That said, this new M1 platform, having had time to mature, offers equal performance to Intel's 10nm Tiger Lake-U. More specifically, in our testing, it beats out the Core i5 1135G7 and Core i7 1185G7 13" class platforms in the Lenovo X1 Carbon and Razer Book 13, while the larger cooling platform of the 15" XPG Xenia Xe keeps it ahead of the MacBook M1 in our testing.

Storage performance was a surprise as well, the NVMe controller built into M1 offering a solid 3425 MB/s read and 2235 MB/s write. On top of that 4KQ1 at 75 MB/s is equal to many of the best drives on the market, including Gen4 platforms like the Phison E18. The memory subsystem of the MacBook Pro M1 is quite similar to modern TGL platforms, with DDR4 4266MHz giving 47 GB/s read and 65 GB/s write.

Application support has come a long way for M1. One of the most significant issues Apple had to face was the massive library of applications that were run through Rosetta. Now many, including Adobe and Office 365, are running native and offer increased performance.

Pricing is always a significant factor for anyone wanting to buy into a new laptop, and the MacBook Pro M1, base model at $1299, is a solid buy if you're already in the ecosystem or on the fence. It will offer a better bang for your buck compared to the current list of 13" Ultrabooks powered by Intel Tiger Lake while being dead silent and just sipping on power.