InWin is not one of those companies that need an introduction at this point. If you have seen some crazy boutique builds, mode, or even out of the box insanity, whether it be insane ideas such as infinity mirrors, or just out of this world level chassis designs, there is a chance that was InWin.

InWin for those who are unaware has made a name for themselves offering premium chassis, which in some cases provide never seen design elements or entire feature sets. Things such as mechanization, the previously mentioned infinity mirror, among other more design-oriented elements such as liberal use of brushed Aluminum or other aesthetic and structural features.

The case we have today is the InWin 309, which is essentially a 303 base chassis with a modified front panel and I/O solution. Of course, there was a version similar to this previously based on the same idea, which was the InWin 307, which also had an ARGB pixel art style panel. This is where the 309 shines, quite literally as it has an integrated front LED array that allows multiple different animated effects with the InWin Glow2 software enabling full customization of both the front panel RGB and the installed fan RGB as well.

Key features of the InWin 309 are as follows:

The InWin chassis, while it is designed in such a way it should perform well thermally, the chassis primary attraction and feature set is aesthetics based. The liquid cooling is quite good, reaching up to 360mm top and bottom with a 120mm at the rear as well. The bottom 360mm would need to be slim type as it would be directly placed at the boards lower edge, and therefore too thick of a radiator would block motherboard connectivity such as the expansion slots. The InWin 309 arrives on the market with a part number of IW-309-Black, which is quite nice to see, as it is much easier to decode than some other part numbering schemes we have seen on different chassis. The 309 measures in at 500mm tall while measuring 553mm deep, and 238mm wide. The width should be helpful as it can offer us some extra cable management gap behind the panel.

Motherboard fitment is what you would expect with form factor ranging from ITX up to 12" x 11" ATX. This is big enough to fit most available consumer boards with only the XL-ATX and EATX enthusiast parts not fitting the bill. 3.5" HDD fitment is two, while 2.5" drive fitment is two at default but with an extra tray can reach up to three in total. The PSU is limited to 200mm length. This is more than enough for all but the largest top-end PSUs reaching north of 1200W, and even many of those will fit. The PSU fits up top where the radiator mounting can be, and it mounts on its side, we will look at that when we tear into the 309.

Cooling fitment is exciting and quite expansive for the 309. There are a total of seven fan locations, with three 120mm at the bottom and the top positions and a single 120mm at the rear. The 309 comes with four EGO fans, which are ARGB models with transparent blades. The three included fans have one at the back for exhaust and three at the top section blowing mostly out of the cable management panel. One thing I do like about this layout is that no matter the thickness of the radiator used up top, you cannot interfere with the RAM or motherboard.

The InWin 309 is priced at $199.99, which is both a nice spot but also a tight spot. Placing the 309 in this price range pits it against several powerful contenders. First up would be the Phanteks Evolv X, which is an excellent chassis, and then we have the Dark Base 700 from Be Quiet at ten dollars shy of the $199 mark. We also have the aging 570X from Corsair and the iBuypower Snowblind S, which rounds out equally and lower-priced options in this area.

Priced slightly higher, we find the Define S2 Vision from Fractal Design, which is a solid chassis as well in the $204.99 price range. As you can see, the InWin 309 will have to leave us impressed to earn a spot among the recommended options we have seen to date. 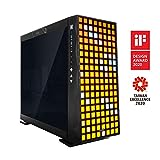