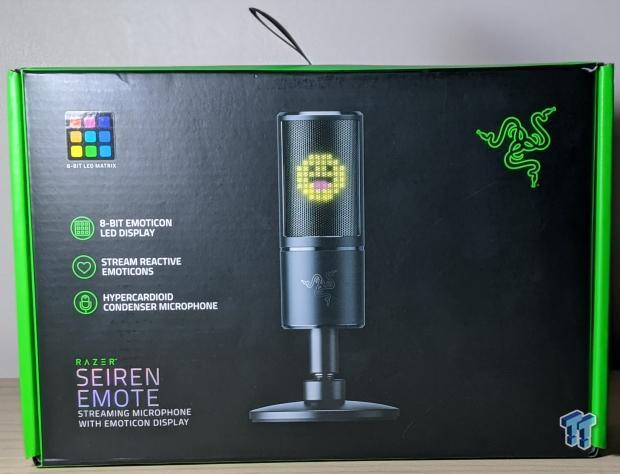 Throughout this review, we will be diving into all of the essential sections an aspiring streamer would be looking at if they were considering buying this microphone. We will be looking at usability, cost, performance, design, and software.

Razer is aiming the Seiren Emote directly at streamers, so let's see if it's worth picking up or if you are going to be better off keeping your old Seiren X. Or, as a complete alternative, jumping over to a new brand of microphone.

Above we have an image of the front of the Razer Seiren Emote box, here's where we can see the mic has an 8-Bit Emoticon LED Display, Stream Reactive Emoticons and Hypercardioid polar pattern. All of which we will get to later on in this review. 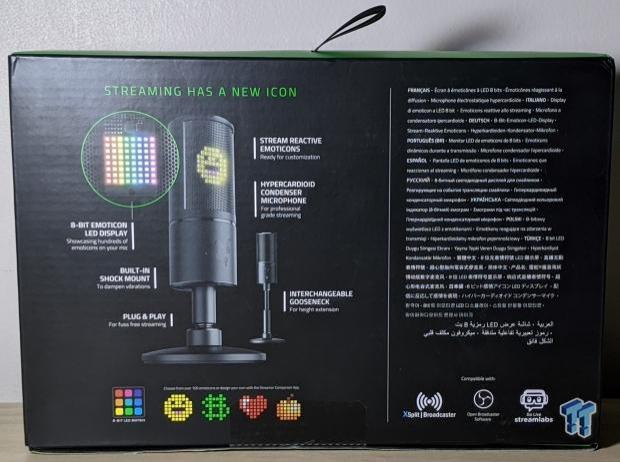 Here we have the back of the box, and as you can see, it shows off all of the features the Seiren Emote comes with. 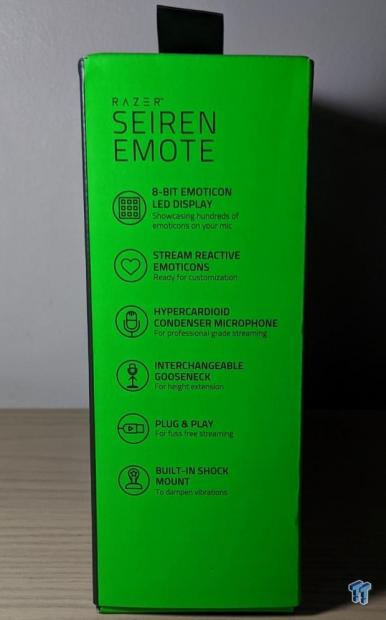 Next, we have an image of the side of the box. This image is just another list of all of the microphone features. 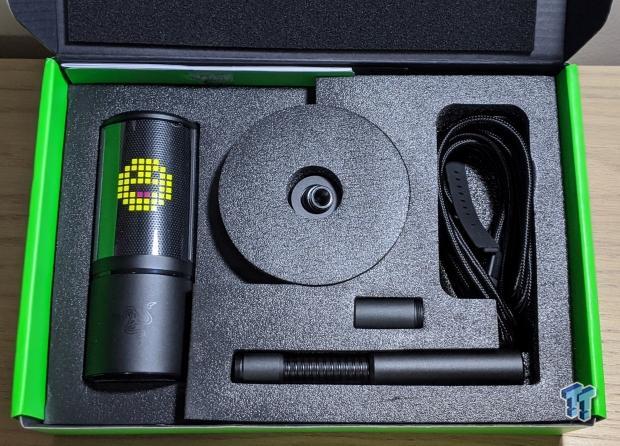 The next image showcases the inside of the box. Razer uses a shiny foam that glistens when it's hit with white light, which is why the foam appears extremely shiny. This isn't the case under normal lighting. The unboxing experience was mediocre, nothing too special and not hard at all. 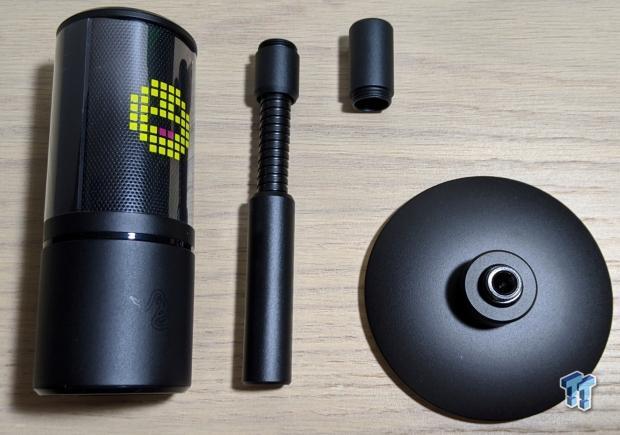 Next, we have all of the Emote parts next to each other. From left to right are the Emote microphone, gooseneck extension, support rod, and shock mount. 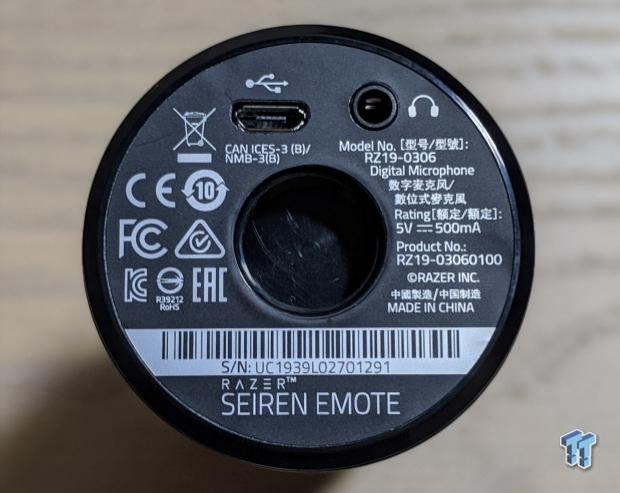 Here's the underside of the Emote microphone. The Emote rocks a micro-USB port and a 3.5 mm headphone port. It also has a thread mount that can be attached to a boom arm. 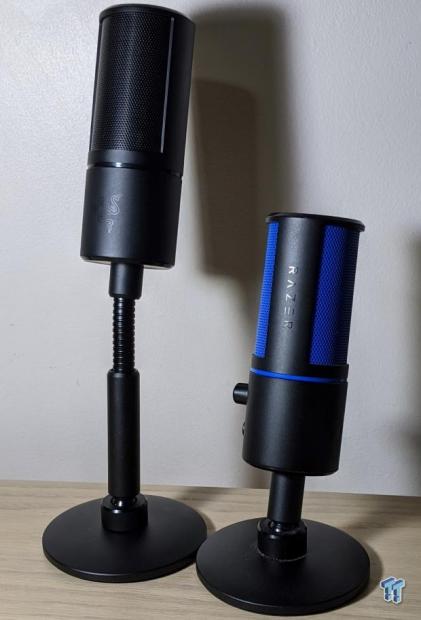 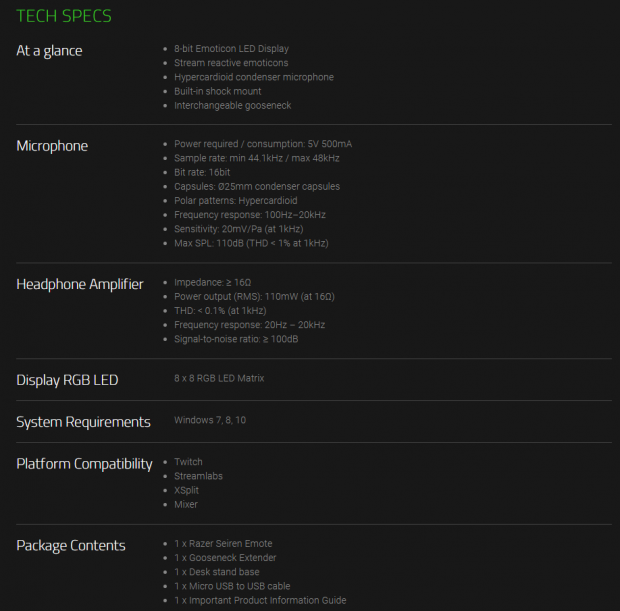 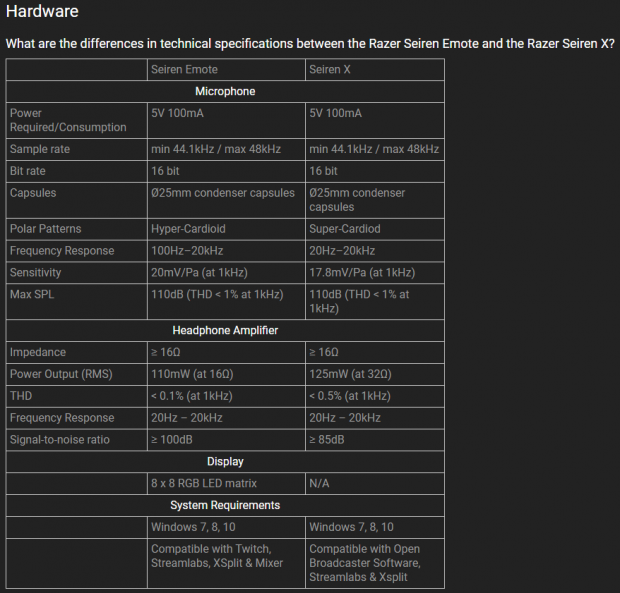 The above image was taken from Razer's FAQ page, a link to that can be found here.

Use Case and Software

Razer is marketing the Razer Seiren Emote directly at streamers, as the whole point of the microphone is to entice streamers to be a bit more interactive with their viewers through visual emoticon use. Upon purchasing the Emote, buyers have the ability to change the 8-Bit LED Matrix to 100 different emoticons and customizing the individual squares manually. 8x8 pixel GIF's can also be uploaded to the Emote through the use of the Streamer Companion App. 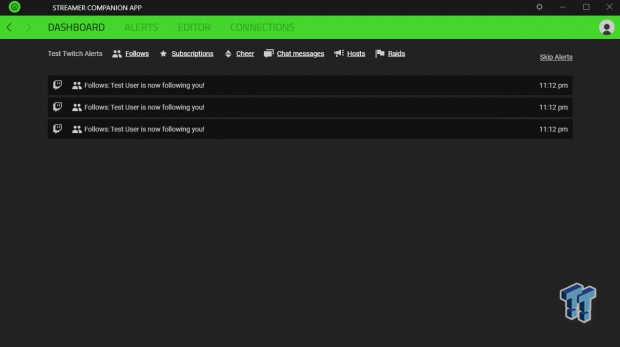 So why would you want to do this? Owning the Emote will give you the option to be able to link your Twitch stream to the Streamer Companion App. Doing this will allow you to add alerts to the Emote that can display custom icons or GIFs on the Emote's LED display. An example of this is when your stream acquires a new follower. Owning the Emote will allow you to program the microphone to show a smiley face (or any other emoticon) every time a new follower is gained. The same principle goes for subscriptions, cheer, chat messages, and more. 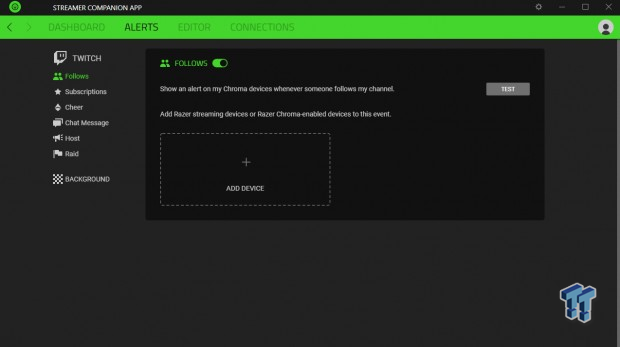 The Streamer Companion app does do a fantastic job of giving buyers many options for customization. The downside to this is that you have to download a whole separate program to use it, why couldn't Razer incorporate this into their base Synapse software to save users the trouble? 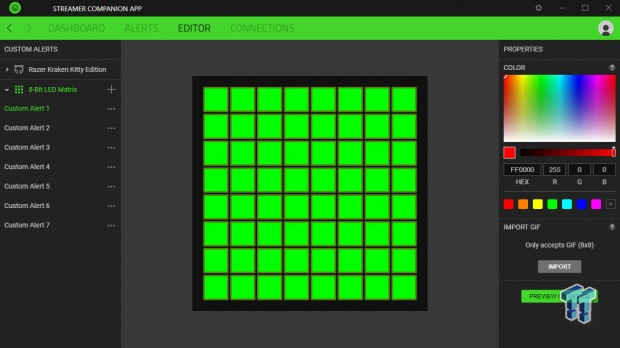 The Razer Seiren Emote is also extremely simple to install, coming under what I like to call the 'plug and play' category. In the odd event of you not being able to get the microphone working, I have provided a step-by-step guide on how to enable it through Windows here. 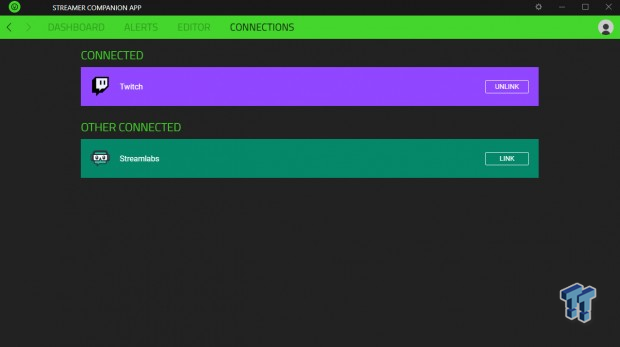 At first glance, the Razer Seiren Emote looks exactly like the Razer Seiren X. After some closer inspection, there are some differences, but not many. The Emote doesn't have the word 'Razer' running down the side of it (a feature I really liked in the Seiren X), it also has a different kind of mesh running around it with smaller holes that are a lot smoother.

The Emote does have an advantage on the Seiren X in its design, as it comes with the detachable gooseneck extender. This optional piece is designed to give the Emote some extra height towards the user's mouth. It's not quite a boom arm, but it's a very nice touch and something that the Emote has over the Seiren X. What I would like to see Razer adopt if they are heading towards more gooseneck attachables is a wider base. Altering the lean of the mic can sometimes cause it to fall if the angle is severe - this would be solved with a wider base

Since the Emote switched to hypercardioid, I was hoping that due to the more narrow pickup and the increased height from the gooseneck extender that this wouldn't be an issue. Unfortunately, this wasn't the case. The Emote still suffers from the same keyboard stoke problem but does better in not picking up as much ambient sound. 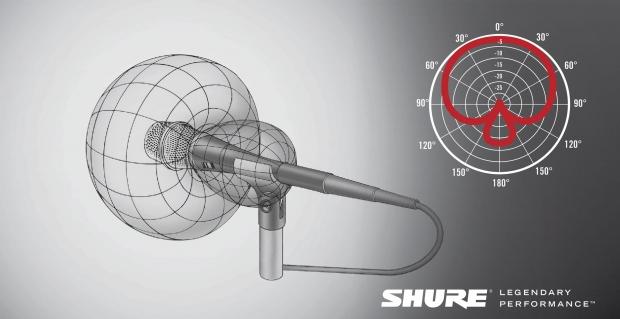 The Emote does have an extremely crisp sound to it, but some of the higher pitch sounds do cut straight into the audio, which can be annoying. Is it a noticeable difference when compared to the Seiren X in pure audio quality? No, not really. I blind tested my friends over Discord with both the Emote and Seiren X, and not one of them could tell the difference in audio quality. I also listened to the playback of my voice through Windows, and I couldn't tell the difference when testing lows, mids, and highs. 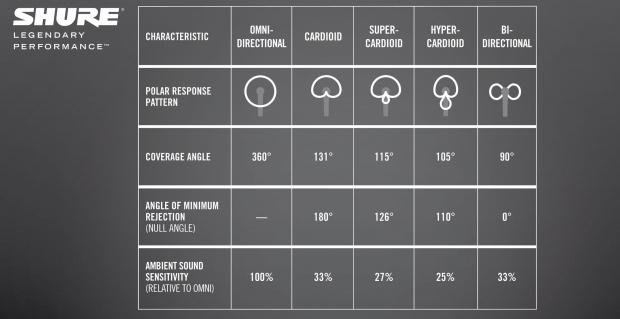 The Razer Seiren Emote has some awesome features for streamers that are looking to spice their stream up with some emoticons and a bit of colorful interaction. The Emote's Streamer Companion App also does a fantastic job of encouraging users to customize the Emote to whatever they desire.

Unfortunately, the Razer Seiren Emote is barely an upgrade from the Seiren X when it comes to overall microphone quality. There are very minimal differences between the two, and most of the main differences appear to be cosmetic, making it extremely hard to overlook the price of the Emote.

All in all, the Razer Seiren Emote is a unique product, but due to its price of $179, it makes it very hard to recommend it to any aspiring streamer that is looking to jump into the streaming game or even someone to upgrade from the Razer Seiren X. 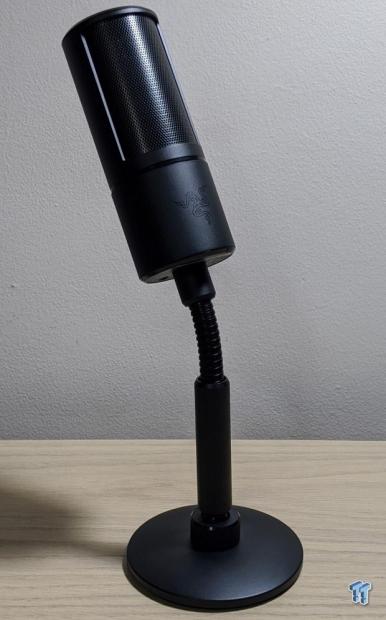 The Seiren X sits at a beautiful $99, the perfect price point for an entry-level streamer, and while the LED Display, gooseneck extender, and better polar pattern are great, they just don't justify forking out a further $80. I would recommend the Emote to someone who is already an established streamer that is looking to add a splash of color to their stream and doesn't mind spending the extra money, but that's unfortunately it.

So, the final verdict. Razer stepped outside of the box and did something a bit different with the Seiren Emote. It's undoubtedly a unique and very cool product. Unfortunately, Razer decided to essentially re-package the Seiren X, throw in an optional gooseneck extender, slightly increase microphone quality, and jack up the price significantly.

The Razer Seiren Emote is an incredibly unique microphone, but really, it's basically just an expensive re-packaged Razer Seiren X with a programmable LED display.