A 1080p60 capture card that can passthrough 4K60 and even 1440p120, the Elgato HD60 X is for those that want high-quality 1080p capture while also wanting to dabble in content creation and streaming.

On Twitch, the most popular streaming platform for creators and gamers, video quality or stream quality sits at 1080p60 - the resolution and refresh rate viewers get to see from the comfort of their homes. In turn, most long-form YouTube pieces that integrate game capture are also presented in 1080p60. What would suck would be a situation where to capture or stream, you'd have to game in 1080p60 on a PC or console just to keep things across multiple displays and devices the same.

That's not the case, and although the Elgato HD60 X is marketed as a high-quality 1080p60 external capture and streaming card, it can passthrough 4K60 HDR, 1440p, VRR, and other signals while keeping capture and broadcasting locked at a solid 1080p60 SDR. 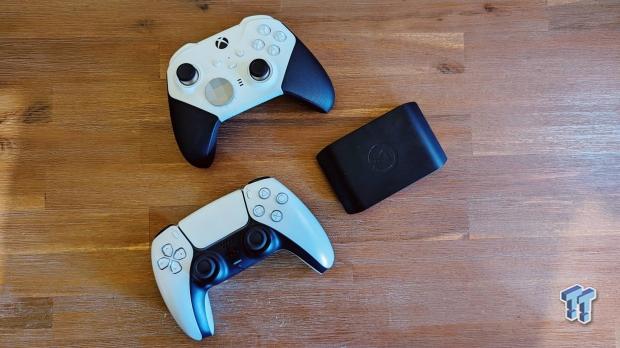 It can record 1440p60, too, something that is kind of hidden in the settings. This is important not only due to the 4K nature of consoles like the PlayStation 5 and Xbox Series X but because of the current top-played games on Twitch. A long list that includes several fast-paced competitive shooters: Overwatch 2, Apex Legends, Fortnite, Valorant, CS: GO, and others. Most of these titles are played on PC, using high-refresh rate, low latency displays.

So, with the Elgato HD60 X able to support 1440p120 and 1080p240, you're looking at a capture card that will pair nicely with many VRR-capable competitive displays with either G-Sync or FreeSync.

As one of the bigger players when it comes to hardware designed and created for streamers and content creators, perfectly encapsulated by Elgato's popular Stream Deck device, being able to slot the Elgato HD60 X between a console or PC and a display and then integrate it with lag-free monitoring into popular platforms like OBS and Xsplit is very cool to see. 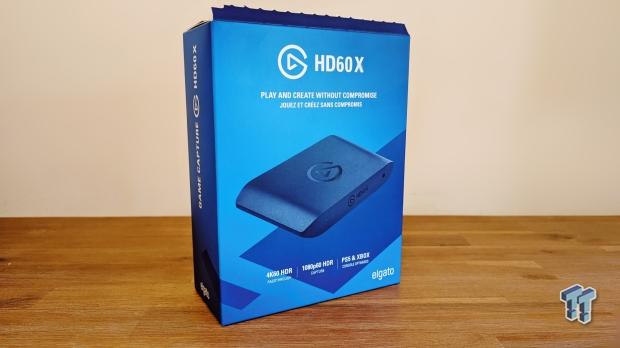 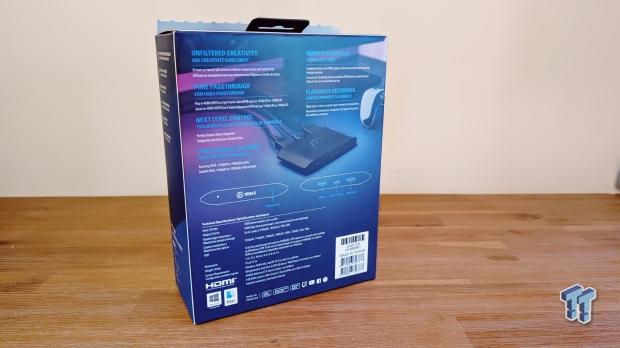 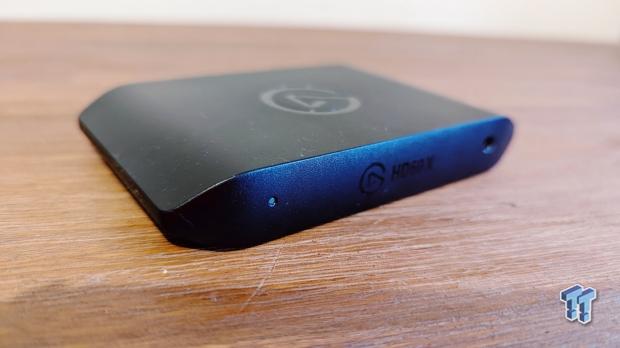 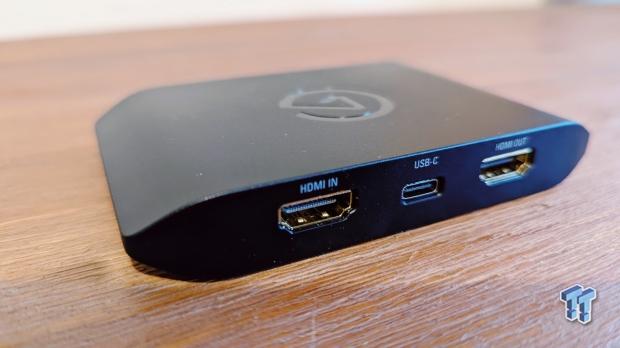 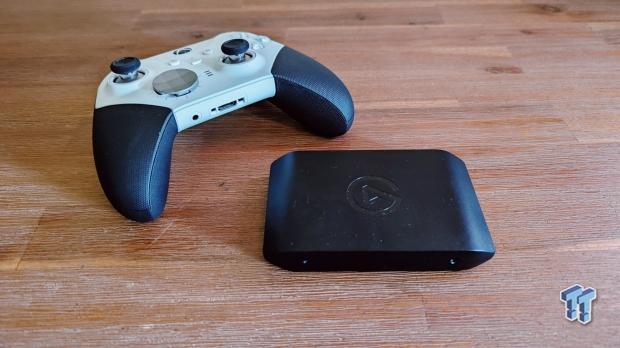 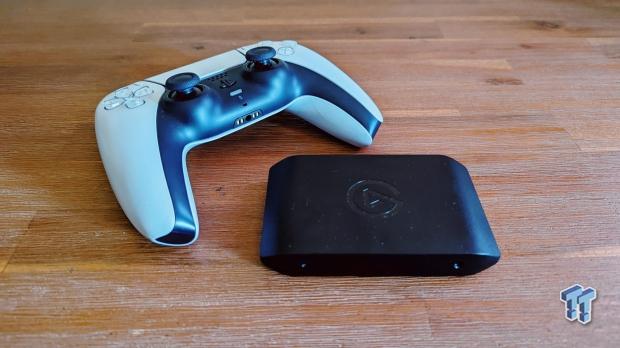 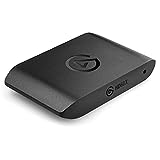 Weighing in at a lightweight 91 grams, the Elgato HD60 X is certainly slight and tiny in terms of gaming hardware real estate, with a sturdy plastic build that's angular and minimal. Apart from the connections, and a small status light, all you've got is the Elgato logo. And if there's any criticism to be laid on the physical design, it might be too light. With two HDMI ports and USB-C, the high-quality thick (and a little stiff) cables provided weigh a lot more than the unit itself. To the point that depending on the orientation, they can awkwardly lift the Elgato HD60 X from a surface and have it dangle in mid-air like a magician showcasing their levitation abilities.

Unlike the Elgato 4K60 S+ we've reviewed, the HD60 X is not a standalone all-in-one recording unit - it needs to be connected to a PC via a USB-C connection for power and capture. Hardware requirements are generous in that you'll only need at least an NVIDIA GeForce GTX 10 Series GPU to capture and encode.

And on that note, no issues or problems were encountered when testing on a GeForce RTX 20 Series laptop and GeForce RTX 40 Series PC; video quality and stability was consistent on both rigs. 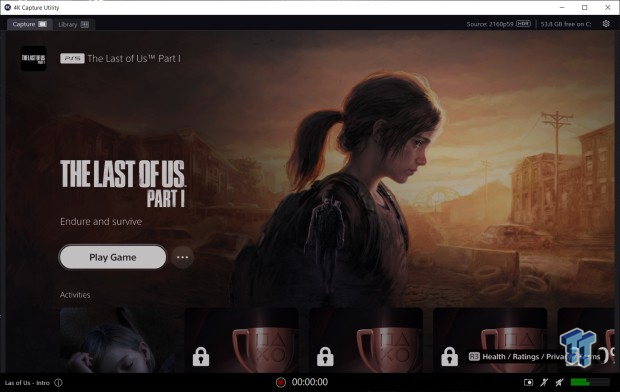 Outside of resolution, another area where the Elgato HD60 X differs is that it employs chroma subsampling (a form of color compression), which can alter the picture in the name of saving some bandwidth. This is something not present on more expensive capture cards, so there is some loss in color uniformity. That said, it's mostly unnoticeable at 1080p and nowhere near as image quality destroying as online video compressions seen across Twitch and YouTube.

The Elgato HD60 X is versatile in the inputs it can handle and works seamlessly with PlayStation 5, Xbox Series X, and GeForce RTX input. Like the 4K-capable Elgato 4K60 S+, the official software provided alongside the Elgato HD60 X is Elgato 4K Capture Utility, a simple-to-use app that offers a quick view of the signal detected and how much capture storage space is left.

The settings are easy to get the hang of too, and it's here where you can adjust the recording bitrate and whether you want to capture HDR content. On that note, this feature is limited to Windows 10 and Windows 11, though based on the low number of gaming-related HDR streams and videos on YouTube, it's probably not a feature many will use.

Elgato 4K Capture Utility also offers a feature called Flashback Recording, which lets it record a few hours that you can stop at any time and trim. It's a nice little feature but brings up some of the shortcomings of the app, in that there's little in the way of keyboard shortcut controls (even though there's Stream Deck integration). The record button is super tiny and doesn't provide much in the way of visual confirmation that it's doing its thing.

The good news is that monitoring footage on the Elgato HD60 X is lag-free, to the point where even if your Xbox or PlayStation is connected to a 4K display, you can still just as easily play a game using the Elgato 4K Capture Utility window on your capture PC. Elgato calls it Instant Gameview, and it's exactly that. 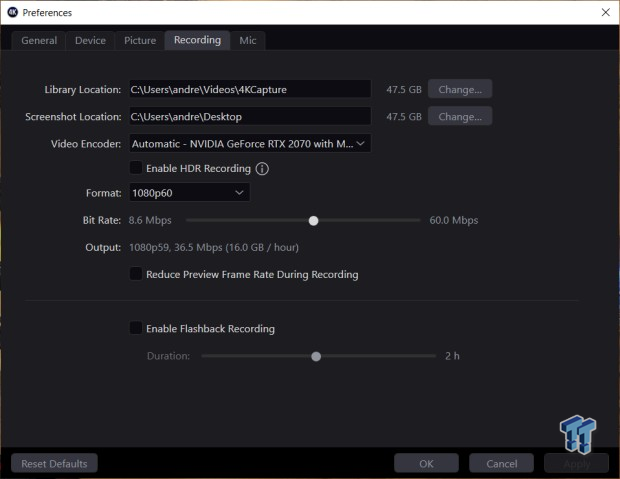 The Elgato HD60 X isn't beholden to Elgato 4K Capture Utility, as most popular third-party capture and streaming applications are supported, and the recorded video files easily slot into editing software like Adobe Premiere and others.

One of the cooler features is that not only does the 3.5mm audio jack on the Elgato HD60 X record commentary, but there are options to export and capture video in formats that allow for separate audio track tweaking when editing.

Being able to stream or play in 4K60 or a high refresh rate and still capture high-quality 1080p60 video is what the Elgato HD60 X is all about. And on that note, we decided to fire up the recently released The Last of Us Part I Remake on PlayStation 5 and play it in Performance mode - 120 frames-per-second 1080p with HDR.

For a cinematic game like The Last of Us Part I, 120fps might be a little overkill, but it's the sort of test right out of the gate that showcases just how great the Elgato HD60 X is at handling various resolutions and frame rates - while still being able to capture 1080p60 content with impressive detail. Check it out.

Of course, YouTube adds its artifacts, but even with online video compression, the quality is excellent. For the next test, here's Diablo III running at a native 4K60 on Xbox Series X. In addition to being a mini flex showcasing my Season 27 Barbarian obliterating a Level 100 Greater Rift with insane speed and pyrotechnics, it's a great example of how there's no stuttering or glitches when recording in 1080p60 with the Elgato HD60 X.

Naturally, the original capture is crisper in detail, but it's a good 1080p60 showing on YouTube and indicative of what you can expect in terms of content creation.

Another cool feature is that you can record in Elgato 4K Capture Utility and stream via OBS using the Stream Link functionality - and with lag-free monitoring, it certainly positions the Elgato HD60 X as something as good for streaming as it is pure 1080p capture. And it's simple to set up and use.

Although it doesn't support HDMI 2.1 resolutions and refresh rates, being able to passthrough 4K60 and 1440p120 with VRR covers most displays and TVs used to play and stream games. And with the default capture and streaming being lag-free 1080p60, the Elgato HD60 X is the sort of capture card perfect for PC, PlayStation, and Xbox streaming and capture.

With the intent being to either broadcast on Twitch or post some clips on YouTube. The quality of the recordings is great, and Elgato's simple-to-use software makes capturing a breeze. Even the price-point of USD 200 and AUD 320 sweetens the deal once you factor in that it doesn't interrupt 4K or fast triple-digit 1440p and 1080p gaming.

A 1080p60 capture card that can passthrough 4K60 and even 1440p120, the Elgato HD60 X is for those that want high-quality 1080p capture while also wanting to dabble in content creation and streaming.