XPG or the ADATA gaming brand is something we have seen quite a bit with our memory reviews over the years, but now in a move that was a bit unexpected, they now offer PC cases. XPG seems to have split off into its own brand now. With that being said and the fact that ADATA or XPG as it is, it also moved into peripherals. It is a natural progression that to be an end to end solution provider that chassis would be on the roadmap eventually. Now it is up to us to see what sort of merit the new XPG chassis offers.

XPG Chassis are part of the gaming lineup, so you can bet that first and foremost, they will be targeted at gaming and enthusiast. This holds when you look at the marketing material from the XPG page for the chassis. As expected, there will be RGB as well, because gaming has become synonymous with RGB in the eyes of many manufacturers.

Key features pulled from the XPG Invader product page are as follows:

The Invader includes an ARGB controller along with extra leads to synchronize components and even synchronize to music. The Invader is said to support a 360mm radiator up front while the top or parallel to the motherboard can support 240mm as well. The Invader comes with two pre-installed 120mm fans, which are DC controlled. The Invader carries a reasonably simple part number of INVADER-BKCWW, which is far more comfortable than some of the alphanumeric identifiers we have seen. The Invader is listed as a mid-tower and comes in at 470mm tall, 482mm deep, and 206mm wide. The width is worrisome as I think taller memory modules may block the ability to mount a 240mm radiator up top.

Motherboard fitment is from ITX up to ATX. No eATX, which is ok, but something to keep in mind. 2.5" and 3.5" drive fitment is two and two; however, the 3.5" HDD trays can fit 2.5" drives alternatively, which means up to four 2.5" drives is possible. PSU fitment is listed as up to 225mm, which is more than enough. But we do have to see if the HDD cage cuts into this. The PSU is hidden under a PSU shroud at the lower-end of the chassis and has passthrough ports for cables to ease installation.

Fan fitment up front is up to three 120mm or two 140mm fans. The top will fit up to two 120mm same with the vertical mounting running parallel to the motherboard. Rear fan fitment is a single 120mm, and even a lower mounted 120mm fan is possible. Radiators are similar but absent 140mm based units. CPU cooler height is limited to 170mm if you call that a limit as that fits all but the most extreme tower coolers. The Invader comes with two DC fans at 120mm, and both are DC. The fan placement is one in the front for Intake, while the rear has the same model fan as exhaust. I do see that while the top fan mounting is offset to the outer panel, I do worry that the 206mm width of the chassis may limit RAM height, as previously mentioned, if installing a radiator up top.

The XPG Invader comes to the market at $89.99, which is a pretty aggressive price point and will find itself among many competitors. The $89 price point is also inhabited by such contenders as the Meshify C and Define C from Fractal, the Eclipse P400A, P400S from Phanteks, and even the Enthoo Pro M form the latter. XPG is a new brand to the chassis market, is going to have to pull off some reliable performance and features to stand out among those in this price range. 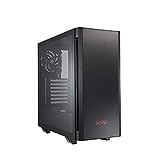