When we think of ASUS, we think of GPU's Motherboards, Laptops, and various other peripherals and systems. One area I did not think I would see the ASUS name is in the PSU arena. Today we have the THOR series 850W PSU.

ASUS has marketed the THOR series as an extreme performance PSU focused on quality and styling. Styling is quite apparent with the addressable RGB design and the OLED display on the side of the unit. However, the quality part is a bit tougher for most people to see, and that's because ASUS has worked with partners to make a platinum PSU with massive heat sinks to ensure that the performance will be there and always be there even under heavy loading.

The key features highlighted by ASUS are as follows:

The features seem stout and provide some credence to the performance claims and bold appearance of the THOR PSU. However, there are some things I feel need clearing up. The Aura sync lighting connects to an addressable header on a motherboard, so Aura will not identify the device as it does not have a USB interface. The 0dB fan mode is a feature that many PSUs offer. The OLED display functions as a constant power meter, displaying your PC's wattage draw. Last but certainly not least is the warranty. While ten years is excellent and roughly the standard in PC power supplies now, the THOR unit has some omissions. Namely, ASUS' warranty guarantees the performance of the PSU for 10-years but, the RGB LEDs and OLED screen have a limited 3-year warranty. The part number of the Thor 850W platinum PSU is ROG-THOR-850P. The PSU measures in at 160mm length, 150mm width, and 86mm height. This is fairly standard and should have no issues fitting in most chassis with only the smallest of chassis potentially being of concern.

The price, as of this writing, we found the unit for right around $220. The buying locations are limited, as many places show out of stock. However, as of the time of this writing, Amazon showed units available along with B&H. The competition for the THOR PSU will be formidable. Units such as the HX850i from Corsair, even some 1000W units, slip into within 10 dollars of the THOR. The THOR, its performance, and styling will have to be on point to be considered a recommendation. 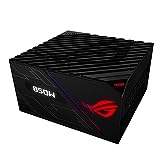