MyDigitalSSD has been a significant player in the value market for many years. While they have produced several drives, including the BPX and BPX Pro that offered a staggering amount of performance for their time, they too offered a tremendous amount of value in their segments.

Continuing on the tradition, the SBX Eco or SBXe was recently launched, and with our 960GB review gone live a little over a week ago, its time to dive into the most popular capacity for consumers; the 480GB.

Starting from the top, the SBXe is all about value taking advantage of a DRAMless design and recent change to the Windows 10 NVMe driver that allows the operating system to allocate DRAM for tasks that would typically be cached on the drive.

This, along with a PCIe 3.1 4 lane interface, Phison E13T controller, and 64-Layer BiCS3 TLC, offer a substantial amount of performance, which translates to 1700 MB/s read and 1550 MB/s write for the 480GB model. Drive endurance is rated at 360TBW, which is a touch higher than the current 970 EVO.

MSRP of the MyDigitalSSD SBXe in the 480GB capacity comes in at $54.99 with a five-year warranty. Packaging for the SBXe offers performance, capacity, and additional specifications for the drive along with a window to the drive itself. The backside shows capacity in bold print and features listed above.

Unboxing, the drive offers a 2280 m.2 form factor. E13 to the left and NAND filling the length of the PCB. The SBXe is setup for M Key slots. Finally, we wrap testing up with Final Fantasy Stormblood bench and scene loading times. For the SBXe, it beat out the MP600 overall at 11.84 total time. Our last chart shows price/performance using 4KQ1 as the performance indicator. This should offer a good indicator of what drive would perform the best as an operating system boot drive vs. the overall cost of the drive. As you can see, the SBXe takes top honors in this category.

Wrapping this up, the SBXe has shown its cards like a real value-driven solution for users that want the additional capacity for their system drive or as a solution for DIY external setups. Durability is a given for the SBXe and is backed by a solid vendor in MyDigitalSSD, along with being rated at 360TBW.

The performance of the drive was on par with marketing materials in read and write reaching 1724 MB/s read and 1580 MB/s write even in a half-filled environment. Further testing shows the drive as a solid competitor in game load situations, along with taking top honors in price/performance for OS drives.

MyDigitalSSD has done a fantastic job with the SBXe offering the 512GB capacity at $54.99 and the larger 1TB model at $89.99 for those that need the additional space. 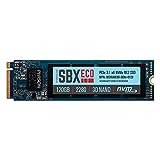 MyDigitalSSD once again proves that you don't need the big numbers to be effective as the SBXe performs amazingly well where it counts!