Normal Gbit LAN comes from an i211AT Intel NIC, but there is also a 5Gbit NBase-T controller from Aquantia, the AQC111C. We saw this same AQC111 chip on the Maximus XI Formula. There are four Pericom PI3EQX USB 3.1 (10Gbps) near the rear IO panel, we find that there are also two ASM1543 type-C controllers, although we aren't sure why. You only need one ASM1543 for one type-C port, but this motherboard only has one on the rear IO panel. An ASMedia ASm1074 can be found near the rear IO and it is used as a USB 3.0 hub to support the four rear USB 3.0 ports. A GL525G is also found on the motherboard and it provides the two USB 2.0 internal headers. ASUS's iconic custom BIOS chip is found on the motherboard, which provides their USB Flashback technology. ASUS decided to up their game and implemented a 256Mbit (32MB) BIOS ROM so that CPU support will easily be achievable down the line, as AMD's BIOS size will increase over the typical 16MB standard. We find a whole lot of Pericom PI3EQX16 PCI-E 4.0 re-drivers, six to be exact, which are capable of improving the signal of 12 PCI-E 4.0 lanes.

We only expected four for the x8 between the first and second PCI-E slots, but it looks like ASUS decided to add in two extra for the M.2 slot that utilizes CPU PCI-E lanes since the M.2 slot is a bit further down on this motherboard than on others. Two clock generators help PCI-E 4.0 clocking as well. We find four Pericom PI3DBS PCI-E 4.0 quick switches that move x8 PCI-E 4.0 between the first and second x16 slots. The main SuperIO is the nuvoton NCT6798D, and it provides fan control and support. A separate chip labeled TPU helps expand GPIO for fan control and other custom features of the motherboard. A chip labeled STM32 is the common microcontroller found on ASUS motherboard to provide the special OLED function. An AURA chip is also found on the motherboard and it provides RGB LED support. 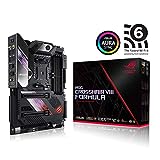