There is no denying EVGA knows their way around a motherboard. They have been cranking out Intel platforms for a decade or more, and their recent Z590 platform is at the top of my list. In our last review of the Crosshair Extreme, we had a word with AMD to clarify their position on the X570S chipset. The return answer we got was this:

So, it appears vendors have just figured out how to cool this chipset passively, or perhaps the active cooling was never needed. That said, the EVGA X570 Dark is technically an -S platform passively cooled with a large aluminum plate that also reaches the M.2 slots.

Hardware-wise, the X570 Dark is compatible with all Ryzen CPUs back to the 3000 series. It supports 64GB of DDR4 memory over two DIMM channels with support up to 4800MHz. Storage includes two M.2 slots and six SATA ports while networking is handled by dual 2.5Gbe controllers and the Intel AX200 Wi-Fi 6.

A full lineup of USB 3.2 is available with internal headers offering three ports and the rear I/O an additional two Gen 1 and four Gen 2. Audio is a 7.1 channel setup using the Realtek ALC1220. 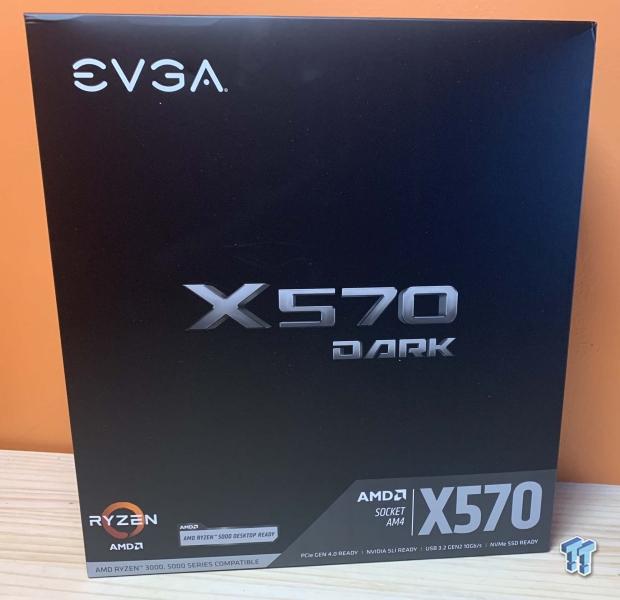 Packaging is the typical black box with the EVGA logo top left, motherboard branding in the center and chipset, CPU support along the bottom. 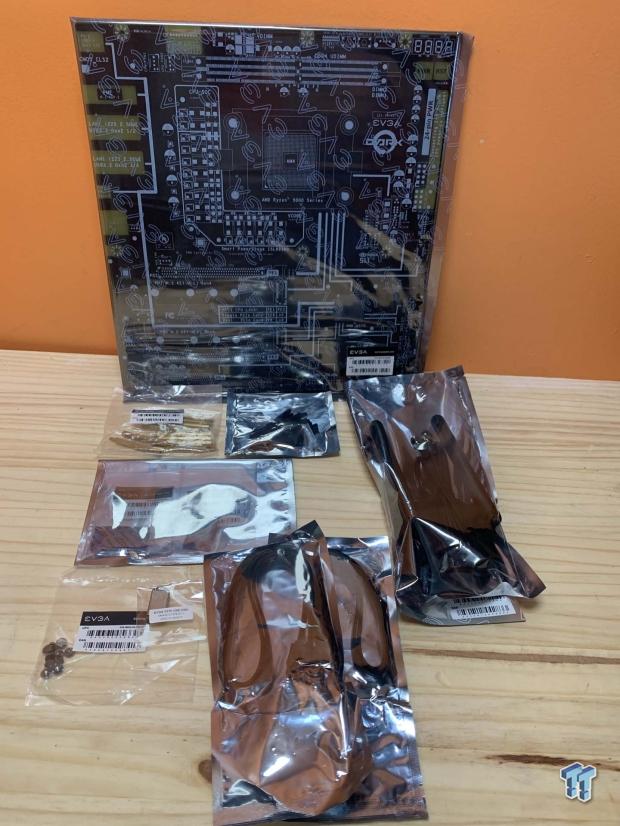 Accessories for the X570 Dark are very similar to the Z590 platform. We have a blank PCB with included stand-offs that acts as a makeshift bench. We also have SATA cables and the Wi-Fi antenna along with voltage measuring leads and drivers on USB. 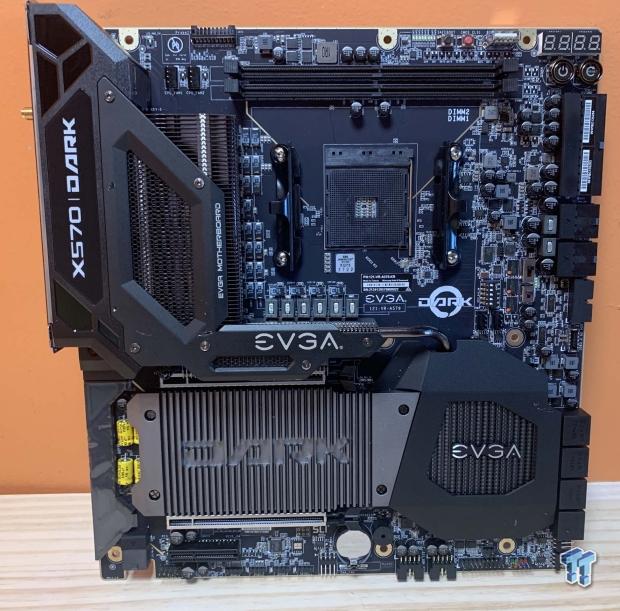 The board itself has a similar design to the Z590 but goes for an all-black colorway. We still have the large heat sinks covering the VRMs, and the CPU socket has been rotated to make room for the memory slot up top. The PCIe layout leaves room for an SLI setup, and that is where you will find both m.2 slots. 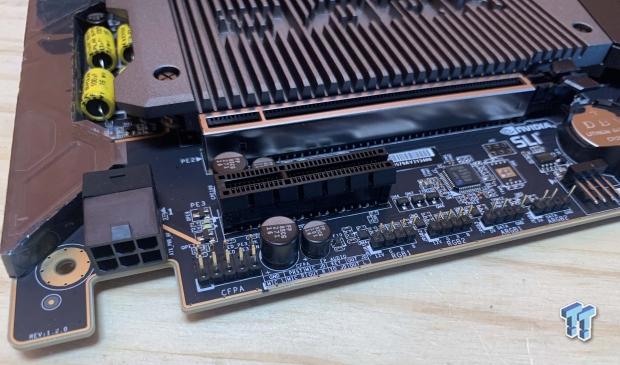 Making our way around the board, the Dark starts with a supplemental power input, followed by a host of RGB connections. 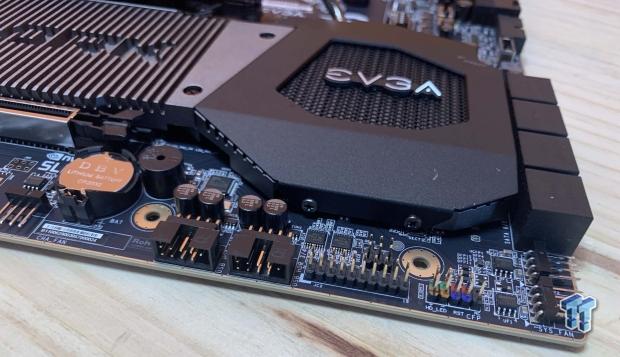 Running down the rest of the bottom, we have USB connections and front panel headers followed up by fan ports.

Up the side of the board, we have the SATA ports and the internal headers for USB 3.2 Gen 2 and Gen 1.

This leads us to the eight-pin CPU power connections and the 24pin motherboard power. 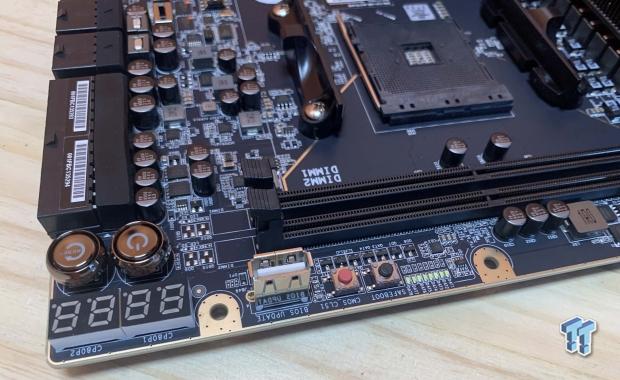 At the top of the board, we have a USB for BIOS updates and the power and reset buttons. 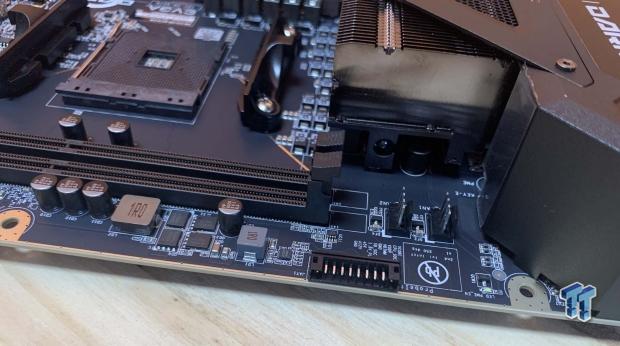 To the end, we have voltage measuring points.

Rear I/O starts us with PS2 and USB 3.2 connections for mouse and keyboard. Further down, we run into the Wi-Fi antenna connections and another set of USB 3.2 ports in red. Above these, we have dual 2.5Gbe ports followed by a 10Gbps USB-C port and audio outputs. 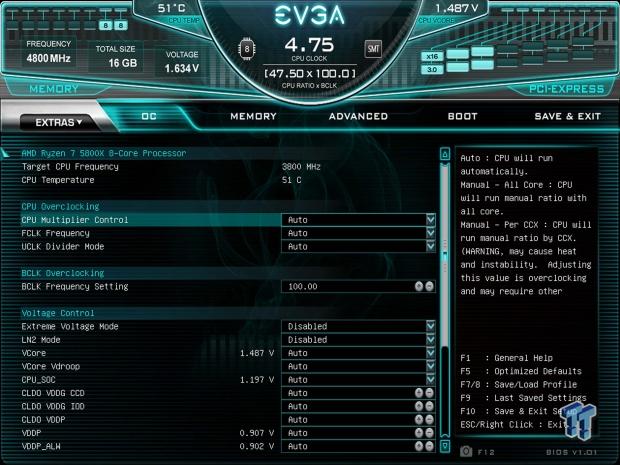 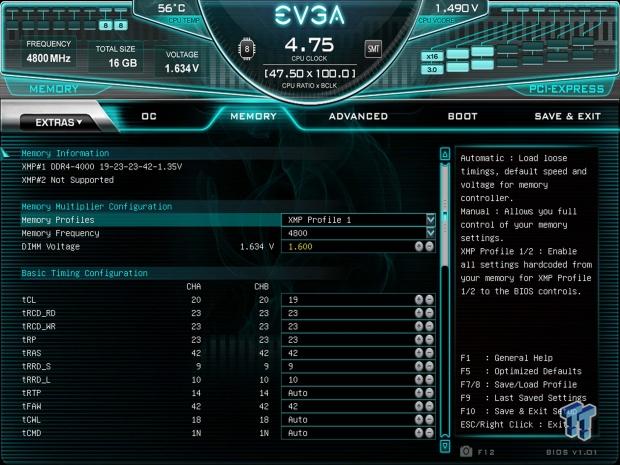 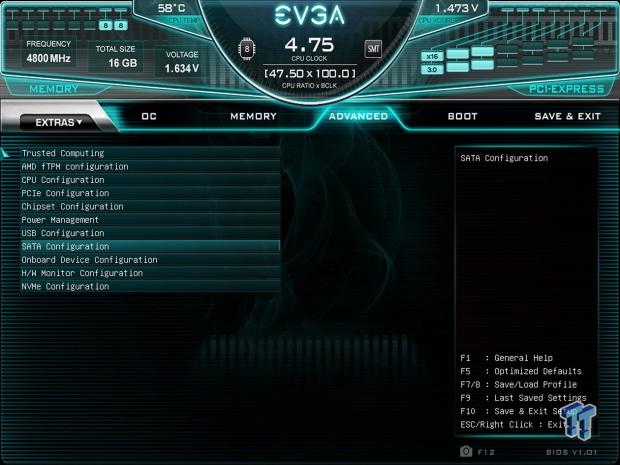 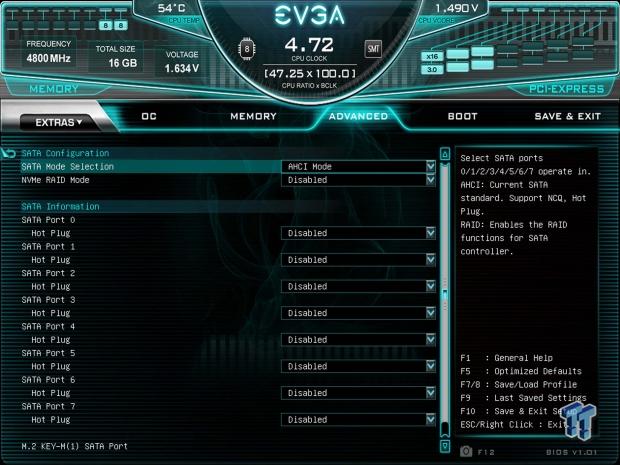 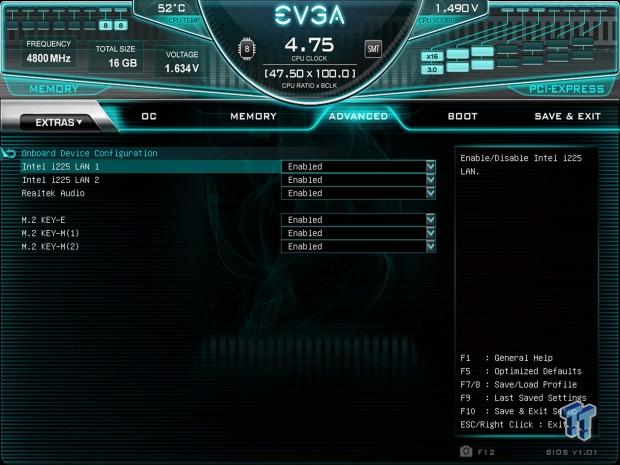 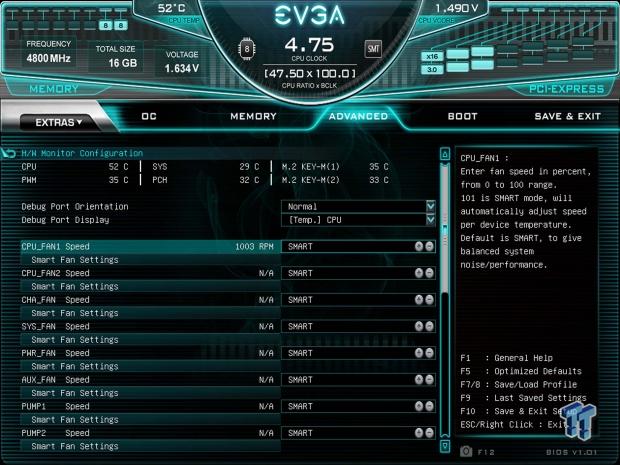 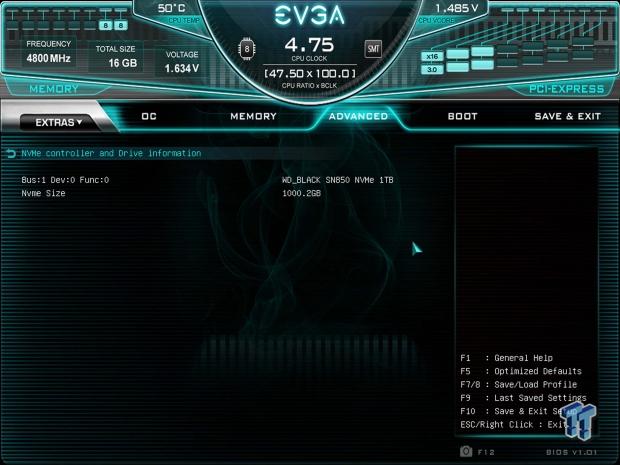 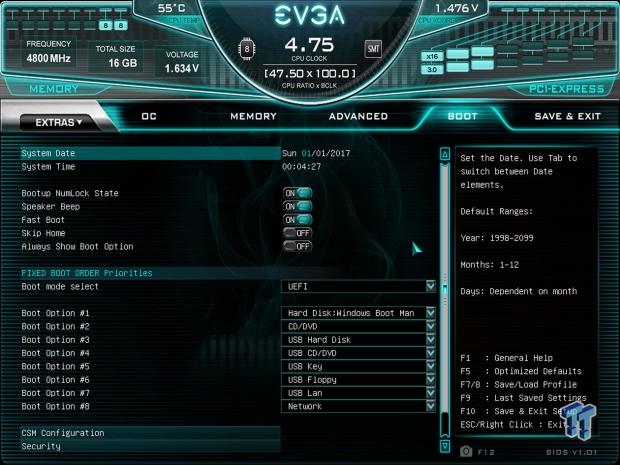 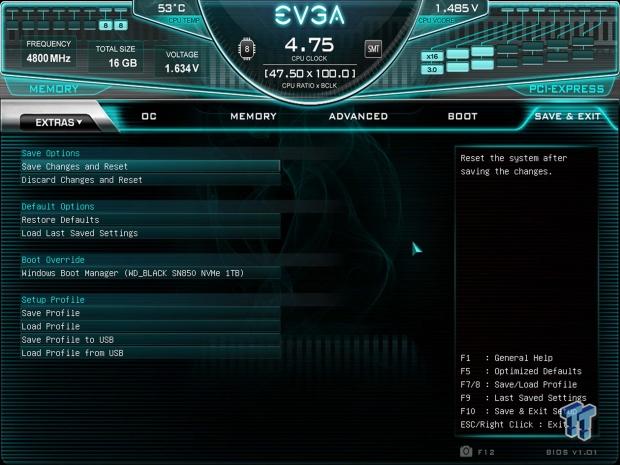 EVGA has done a remarkable job on its X570 BIOS, and it does appear to be based on its Z590 design. The initial screen gives you several options, including Gamer Mode. You can also choose OC Robot to have the board automatically overclock your CPU. Then you have default and advanced modes for those wanting to tune themselves.

BIOS layout is fantastic, the main menu offering all the information needed about the installed CPU, memory, and storage. The OC menu wastes no time letting you tune your CPU with extensive clock and voltage controls, the memory having its own tab to the right.

The advanced menu offers all the platform controls we are used to seeing, including power controls for the CPU, graphics configuration, and onboard devices like SATA, USB, and NVMe. 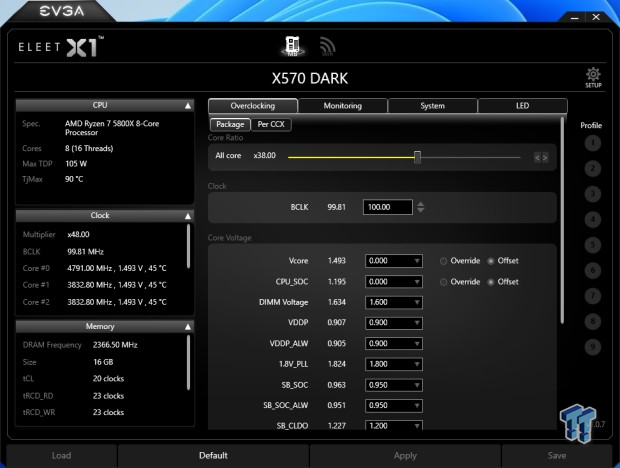 Software is EVGA E-Leet and the same Software we used on the Z590 Dark. This allows you control for overclocking and monitoring your motherboard in windows. 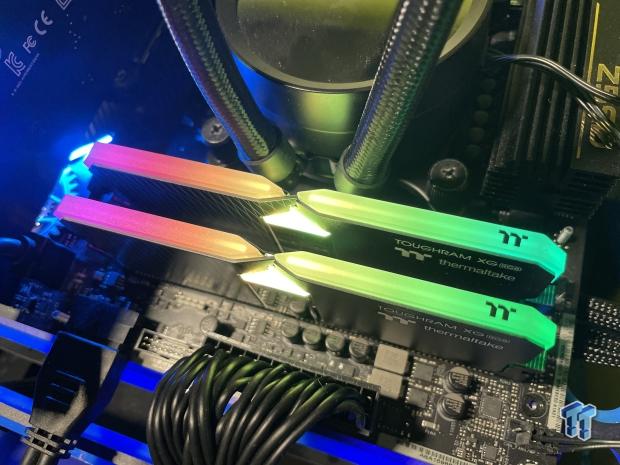 Thermaltake has come onboard with their Toughram XG for all reviews.

The Crosshair Extreme is our first board to be tested with Windows 11. We run the latest beta build in testing to minimize the chance of bugs. It's also our first to go through our new testing regiment that includes starts with storage. 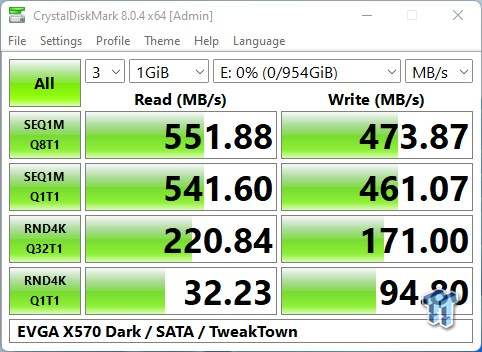 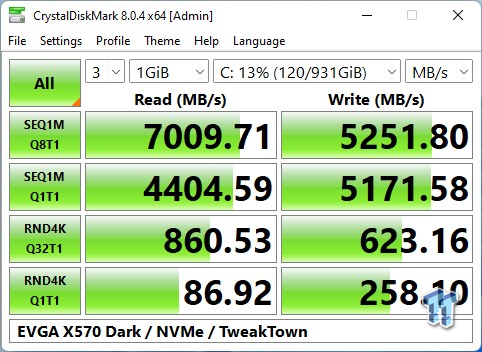 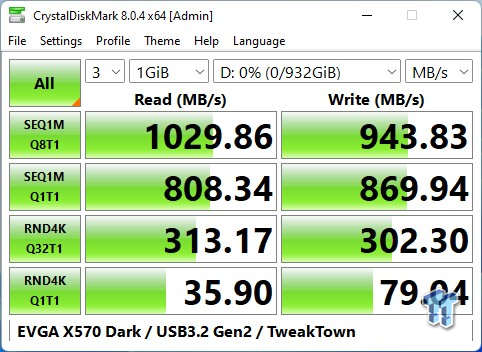 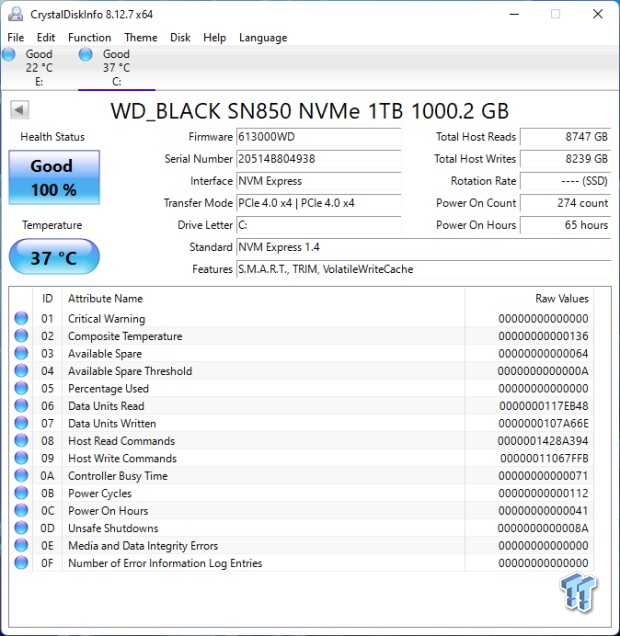 Our last metric is how well the integrated heat sinks cool the SN850 during testing. In the middle of testing, we refreshed CDI to see a temp of 37c on our drive. 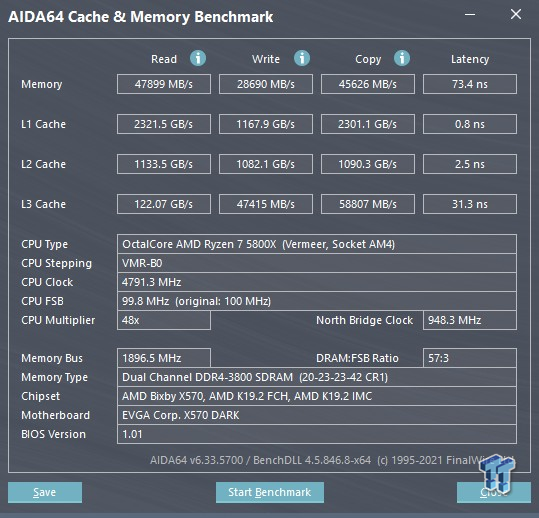 We start AIDA64 with a memory performance bench. With our Toughram running at 3800MHz and a synced fabric, we see 47K read 28K write and 45K copy. Latency runs at 73.7ns. 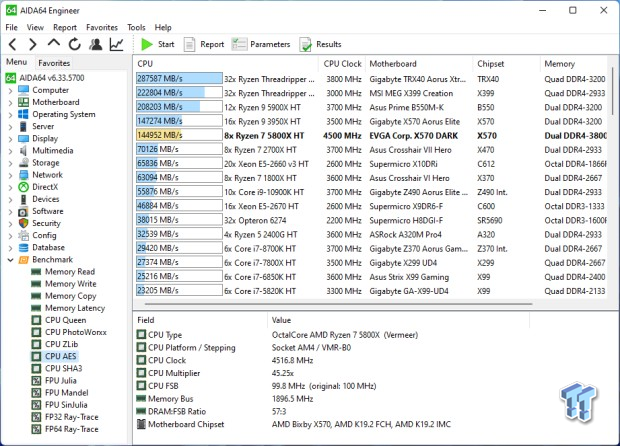 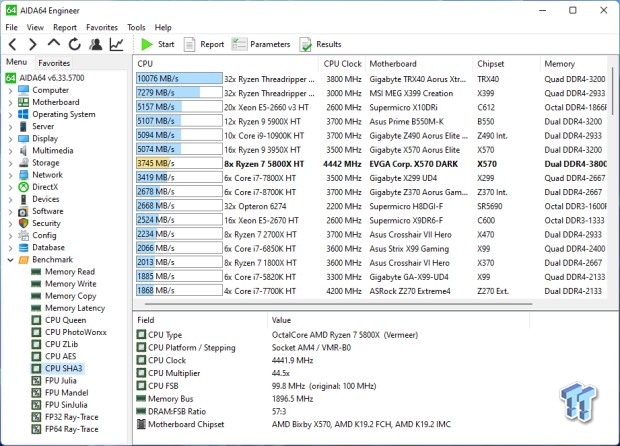 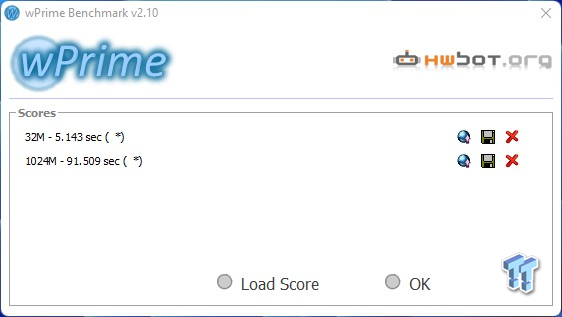 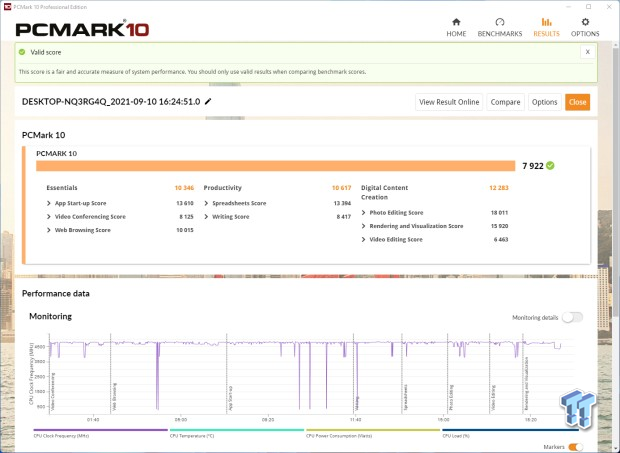 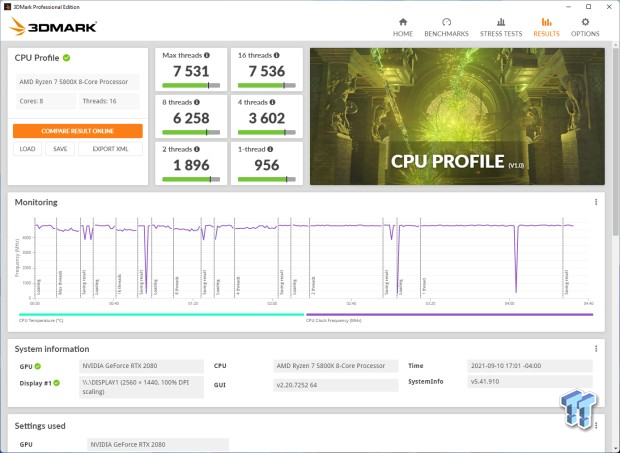 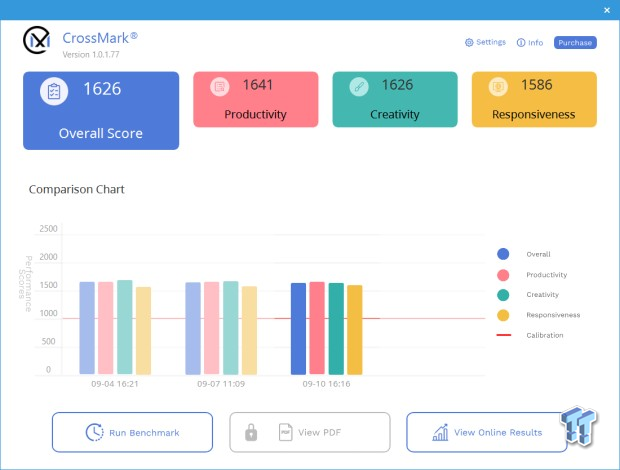 EVGA has timed its first AMD motherboard release fantastically, nearing the EOL point for X570. It brought life to the platform and rejuvenated overclocking with Zen 3 CPUs. In testing, I was able to get a much higher memory speed when overclocking our Toughram on this board, upwards of 4800MHz; we haven't found a board outside of the Dark that was able to do that with our 5800X. CPU overclocking was slightly better; we typically reach 4.7GHz at 1.29v with a little vdroop when testing boards, and the EVGA actually allowed us 4.8GHz at 1.32v with no droop at all.

EFI and Software for this platform are done up really well. EFI is laid out perfectly for overclocking, all control right at your fingertips the minute you enter BIOS. EVGA Eleet allows near full control of the motherboard from Windows, a plus for me when tuning.

Connectivity is good but not great; the board does have dual 2.5Gbe and WiFi6 but lacks USB 3.2 Gen2x2, Thunderbolt 4, and 10Gbe with Wi-Fi 6e; something the slightly higher priced Crosshair Extreme has. That said, this board isn't necessarily designed for gamers or enthusiasts but rather an all-out overclocking platform, and it's been proven with some fantastic numbers put up by Kingpin himself.

Design: Fantastic board layout and aesthetic.

Overclocking: OC was better in our modest testing.

Price: $689 is on the higher-end based on features.

For consumers wanting to push their Ryzen overclocks to the max, the X570 Dark delivers.