Too little, too early? The Lexar NM600 doesn't bring anything new to the market and in fact this hardware combination is a year too late.
Buy at Amazon

Hey everybody, Lexar is back!

At the end of June 2017, Micron announced the closure of Lexar, a long established memory card brand used to sell Micron-based memory products. At the time, no one realized that Lexar was for sale. On August 31, I broke the story that Longsys, a China-based manufacturer of flash products, purchased Lexar from Micron. Finally, in August 2018, a year later, Lexar announced full production of the Lexar product line including classic designs of removable memory. 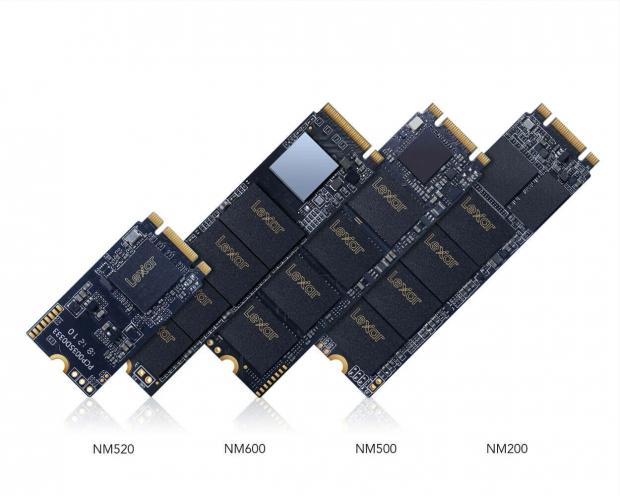 The early press releases make it sound like the Lexar brand would simply stay in existing markets, most of which revolve around removable storage. Longsys, on the other hand, is one of the largest flash-device manufacturers in China. We've secretly known for a long time that Lexar's bubble was growing and that the company would release more consumer-focused products in the future, like internal solid state drives.

Right out of the gate the company has a number of SATA and M.2 products including the NVMe-spec NM600. The NM600 is the current flagship of the SSD product line for early 2019. The drive features a mainstream design with a Silicon Motion, Inc. SM2263XT DRAMless controller paired with Micron's exceptional 64L 3-bit per cell memory. 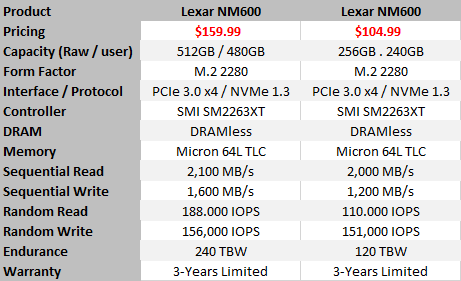 Lexar announced the NM600 series in two capacities at CES, 2018. The drives sport a cost-effective design with decent mainstream performance.

The series uses a Silicon Motion SM2263XT DRAMless 4-channel controller with host memory buffer (HMB) technology that uses a small amount of your system's DRAM to cache the map table through the PCIe 3.0 x4 interface. 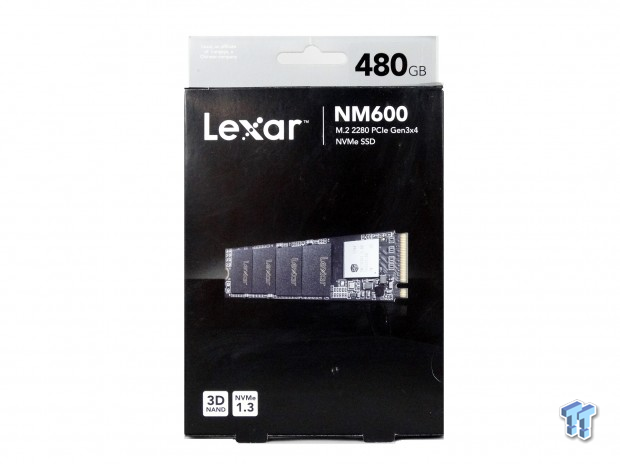 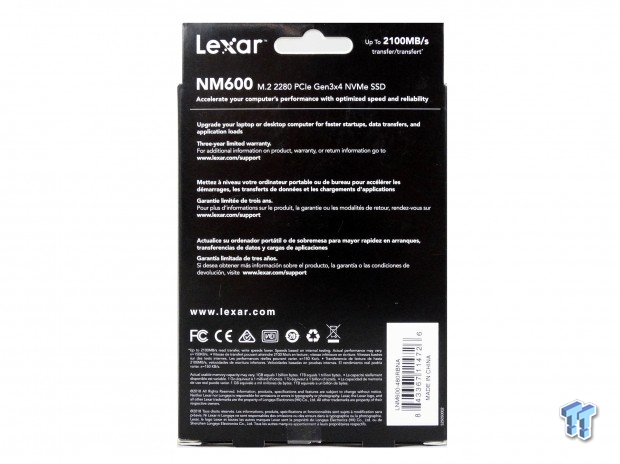 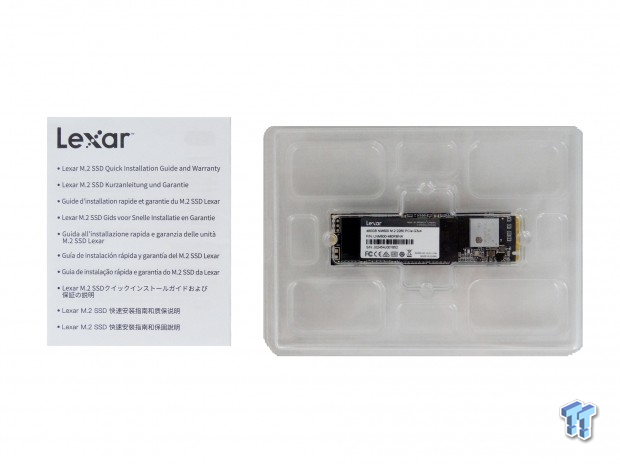 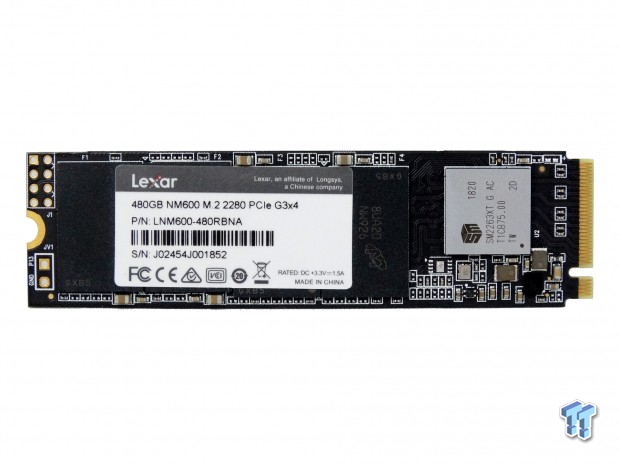 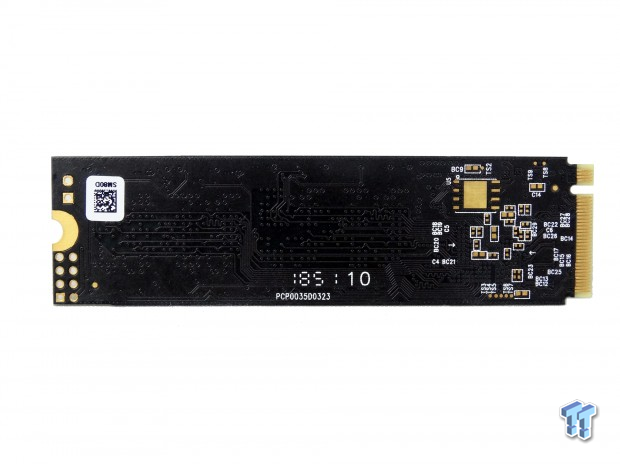 This is the first SSD released under the Lexar name. Under Micron's leadership, we found the Lexar brand confined to the portable storage market and some associated accessories like professional card readers.

That gave the new owners of Lexar a fresh slate to design products with a larger pallet. That doesn't mean the design is fresh either. The Lexar consumer SSD line uses a basic black and silver color scheme. We would have loved to see some of the classic, colorful Lexar color combinations with the initial release but mainly for nostalgia. 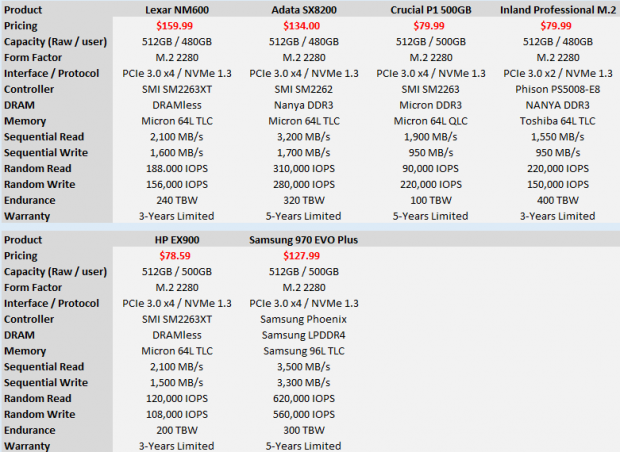 We tried to build a list of mainstream NVMe consumer SSDs to compare to the new 480GB Lexar NM600. This exposed more problems than it fixed in terms of performance and current pricing. To be fair, the NM600 is new to the market, so the series hasn't had time to lose that new SSD MSRP yet.

At the time of writing, the 480GB Lexar NM600 is the most expensive drive on the charts today. It costs nearly twice as much as the HP EX900 released one year ago with nearly identical hardware and similar specifications.

That's not the most troubling part of this comparison, though. The ADATA SX8200, HP EX920, and Mushkin Pilot, although in end-of-life stage or nearing it, are still available and selling at closeout prices. The biggest competitor though is the Samsung 970 EVO Plus, the company's newest release with improved specification and a low $127.99 price point (at the time of writing). 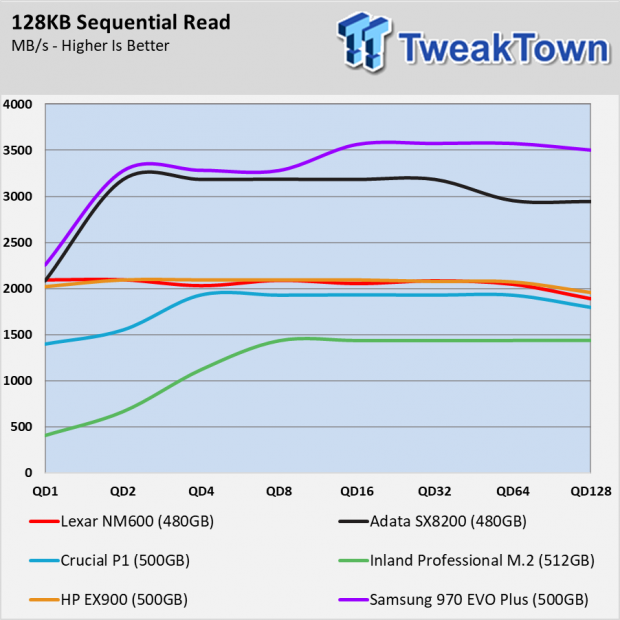 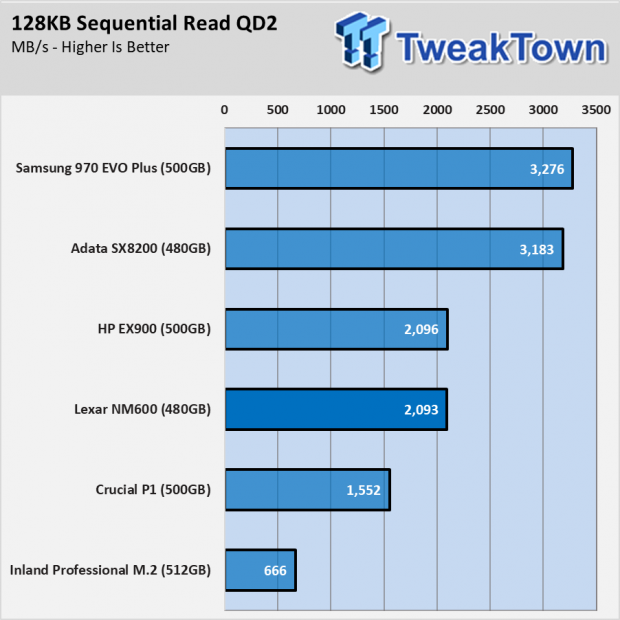 As you can see performance is all over the place in the entry-level NVMe / mainstream SSD market space. There are new drives, old drives, and some technologies that never really took off due to shrinking flash prices and not enough of a cost difference between controllers slated for different markets.

The Lexar NM600 sits right in the middle of the performance pack in the sequential read test. The drive doesn't scale much as we ramp up the workload through increased queue depth. 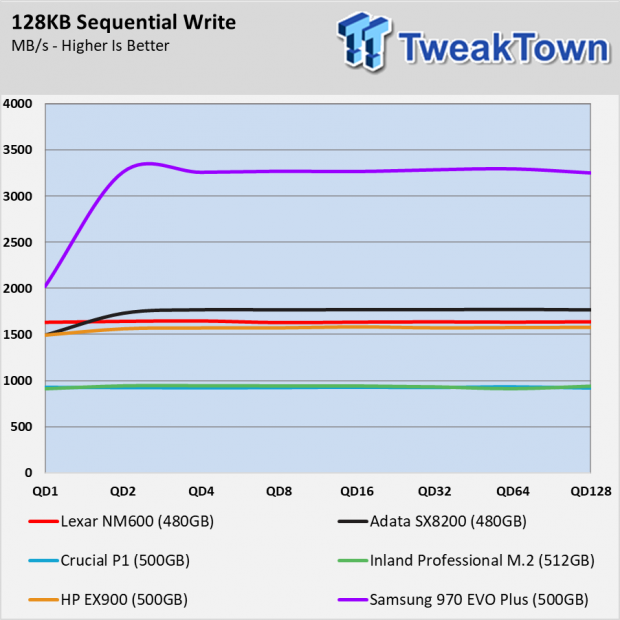 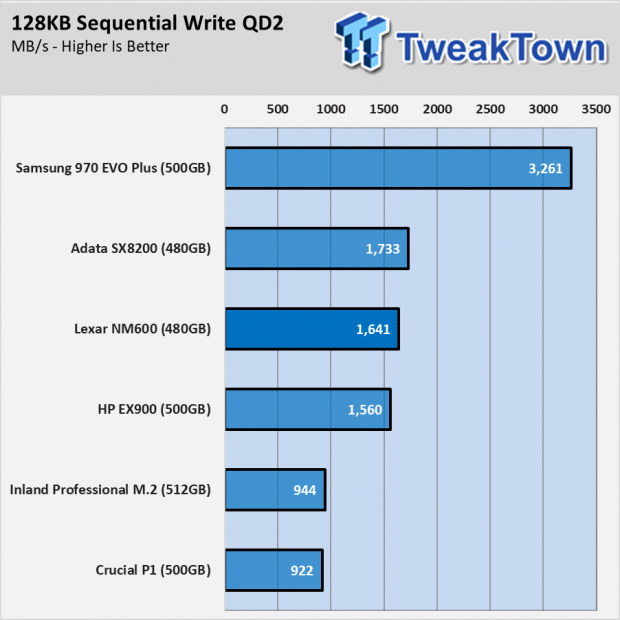 We found the 480GB NM600 at the top of the traditional entry-level NVMe products in the sequential write test using burst data. This isn't the first time Samsung has disrupted this market with a low-cost EVO product, though. Again we see very little scale as we ramp up the workload with queue depth on the drive. 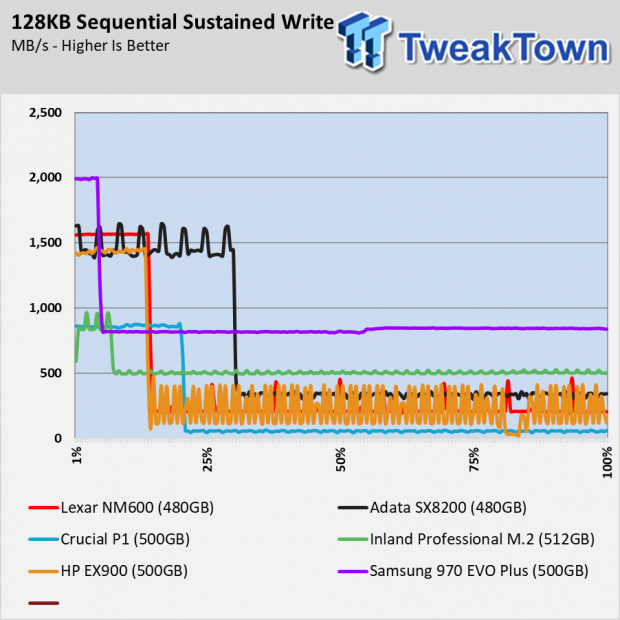 Lexar has increased the SLC write performance with improved firmware since we tested the HP EX900 last year. We see a 200 MB/s difference between the drives. 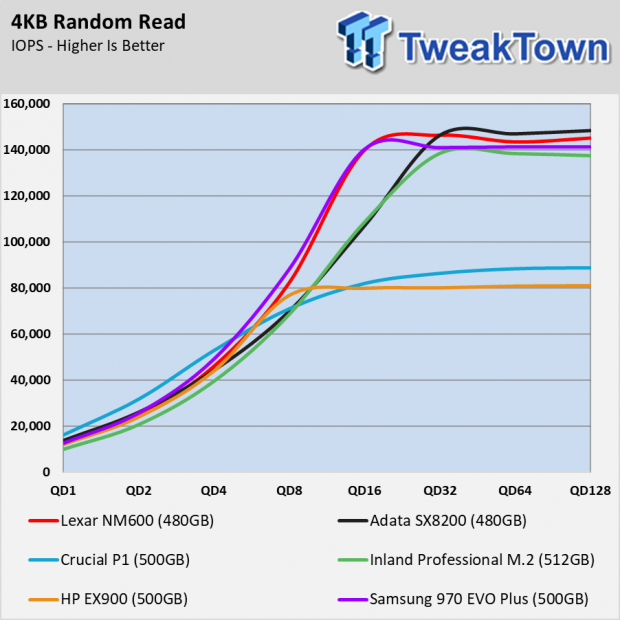 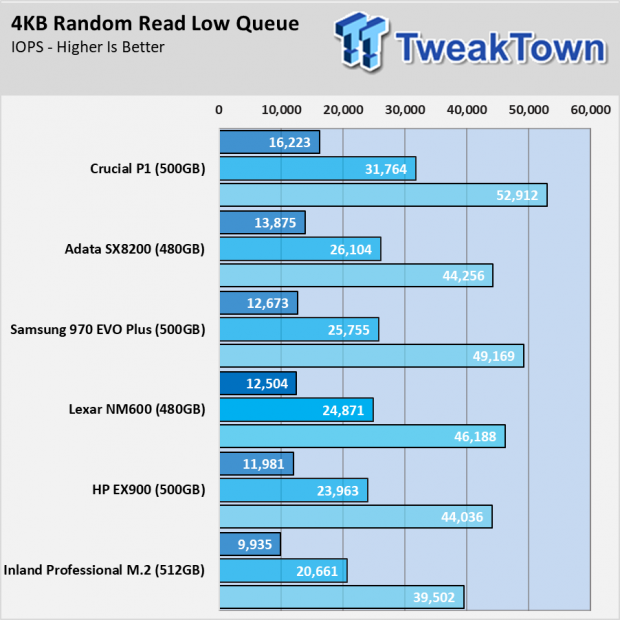 Lexar chose to use the Micron 64L TLC flash that we love. The NM600 delivers 12,500 IOPS of random read performance at QD1. That's a slight increase over the Crucial MX500 SATA SSDs but well off the pace of three lower-cost models in our charts today. 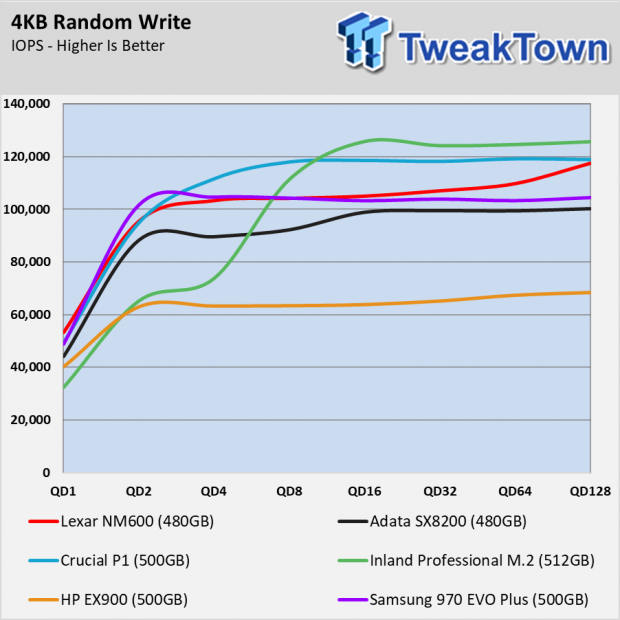 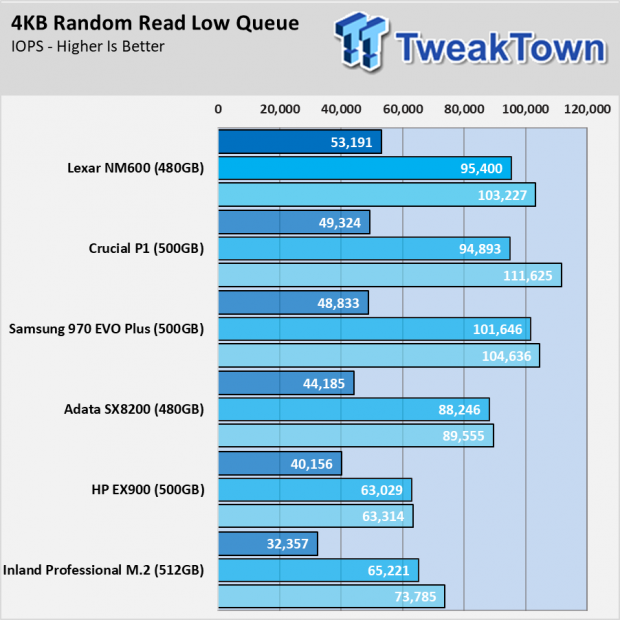 The new firmware on the NM600 handles random write bursts much better than the older SX900. Lexar managed to get the performance in this area in the same range s the other drives. The slope is nearly identical to the Samsung 970 EVO Plus. 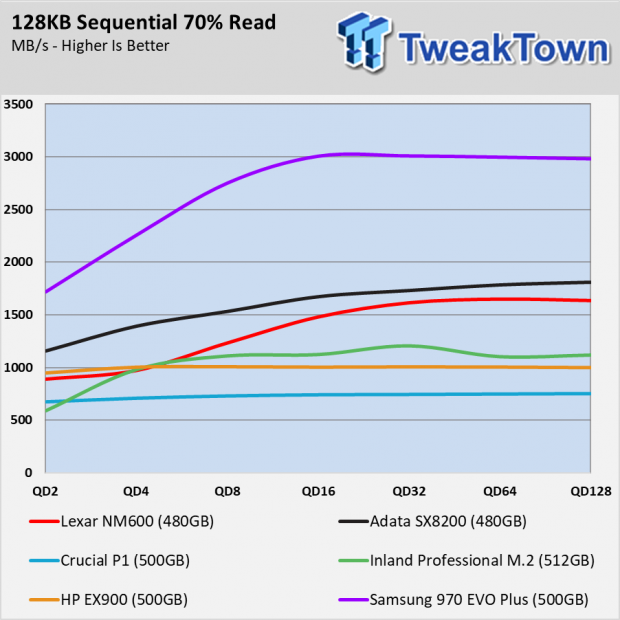 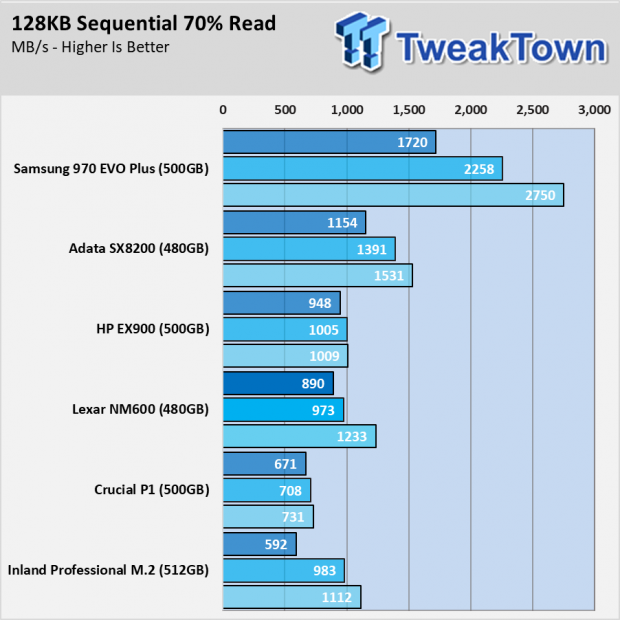 Moving over to mixed workloads with a 70% read, the sequential test shows a slow increase as we increase the queue depth. The NM600 starts in the middle of the range, but lacks the explosive performance seen with the low-cost 970 EVO Plus. 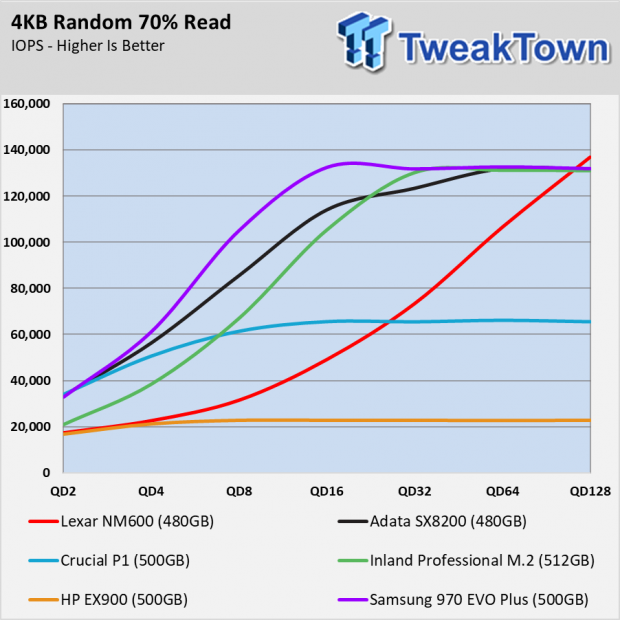 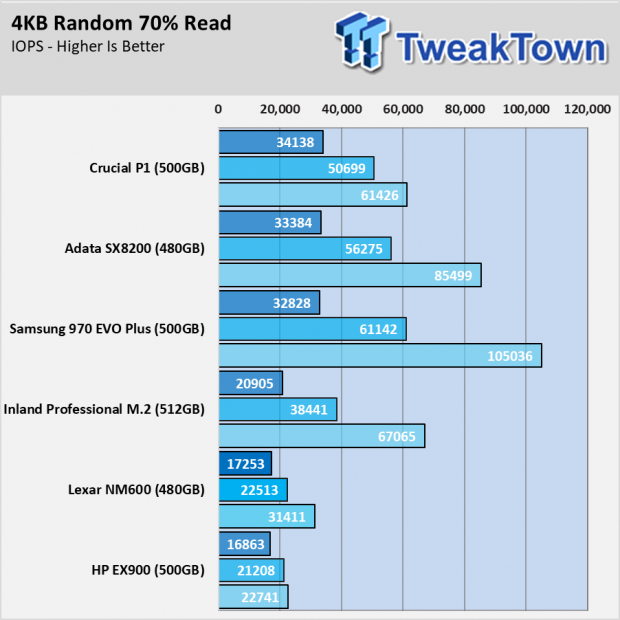 With random data in a mixed environment, the NM600 does scale the performance. This is a welcome change from the HP EX900 with the older firmware. The problem is the rate and location of the increase. We don't see a lot of movement until queue depth 8, and by then, the workload is outside of what most consumers achieve with most applications. 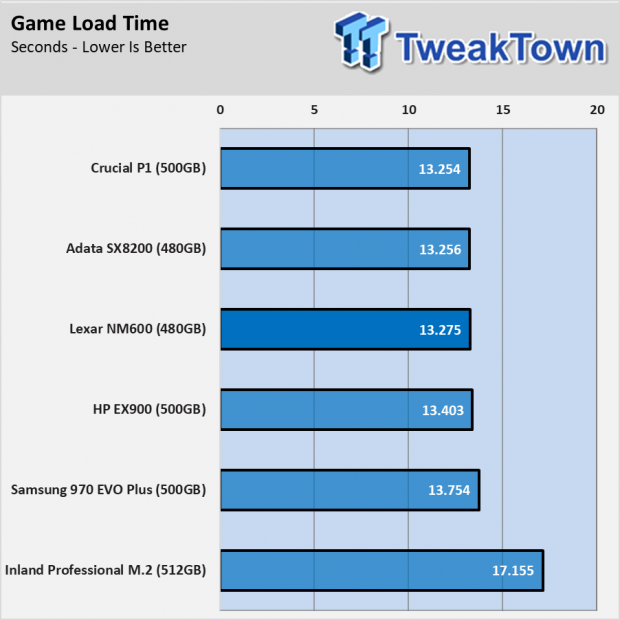 We've shown on many occasions that when you reach a certain performance and quality level, that SSDs all work through simple tasks about the same. There are other limiting factors. The way operating systems manages data is a good example. This levels the playing field by introducing a set level of latency at the start, and the drives can't do anything about it.

We see less than a second of deviation between all but one drive in our game-level load time test. That is also why we feel the pricing is such an important aspect when it comes to entry-level NVMe and mainstream SSD products. 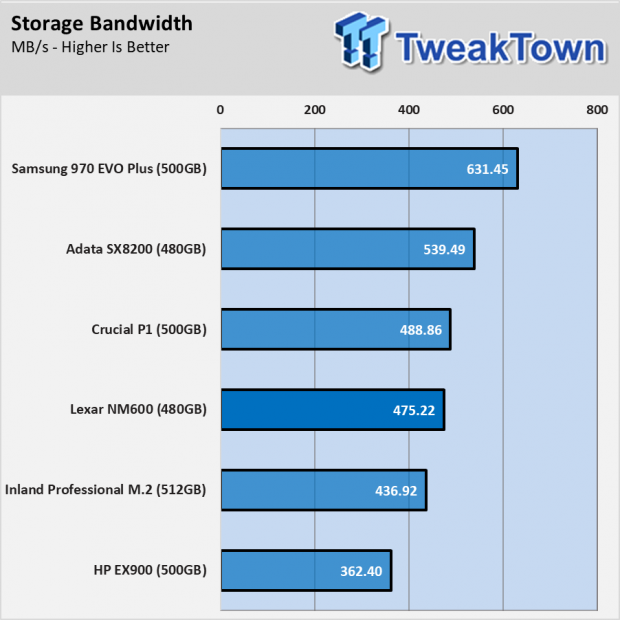 When we widen the types of workload to include a mix of short burst random, and long sequential loads with the PCMark 8 Storage Bandwidth test, result in a widening of the gap between the drives. Here we use nine applications to make ten tests. The 480GB NM600 sits in the middle of the results but trails the Crucial P1 that costs nearly half as much as the Lexar drive. 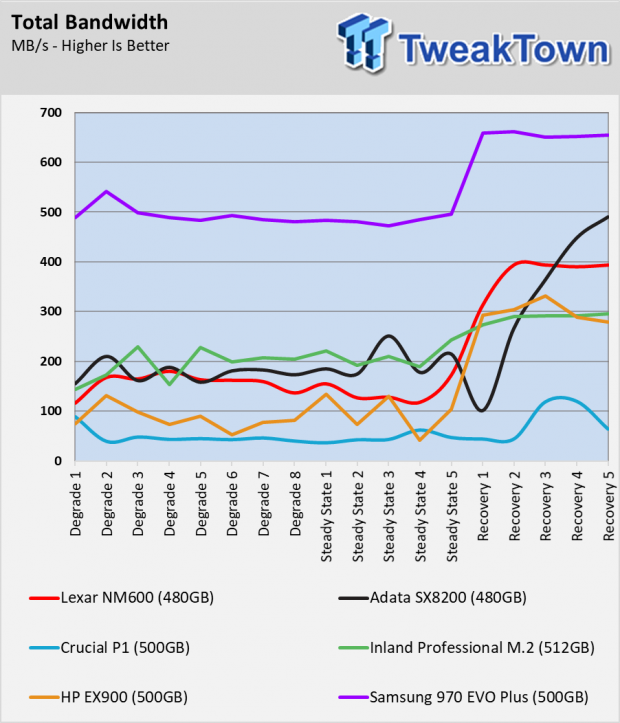 Samsung has managed to bridge the gap between workstation and mainstream SSDs with 96L TLC and improved programming for the Phoenix controller. The other drives in the PCMark 8 Extended Test with the drives filled with data have a difficult time keeping pace. The pure consumer SSDs don't fare well under heavy workloads. 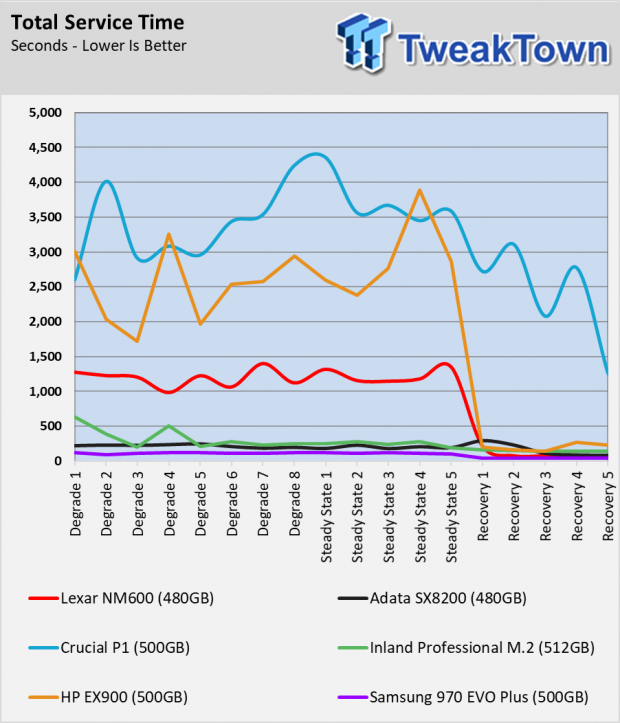 With these products, you have to pay attention to the service times as well. This is a timed measurement of how long it takes to complete the workload. The results show the total time to complete the tasks. This is quite a bit different from the throughput. The NM600 doesn't perform well under heavy workloads but does manage the high-stress environment better than the HP EX900 we tested last year with similar hardware and older firmware. 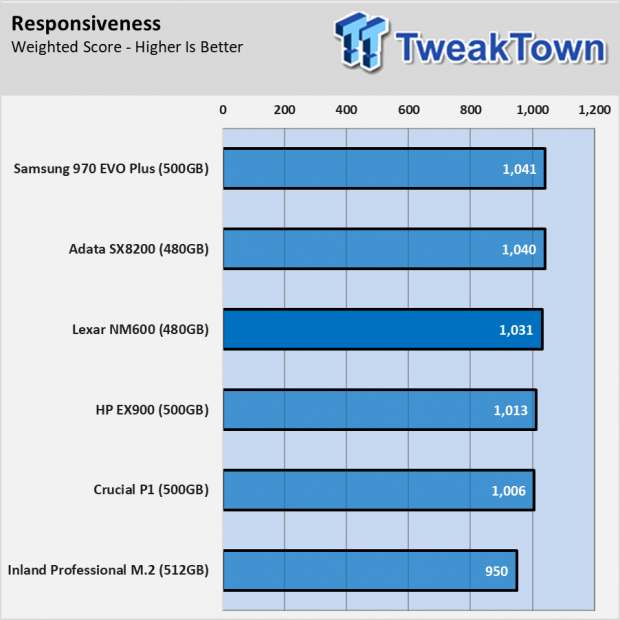 An OEM version of the Samsung 850 EVO is the baseline score of 1,000 in the BAPCo SYSmark 2014 SE Responsiveness Test. It's a drive everyone knows about, many of us owned or still own them, and it's also one of, if not the best-selling consumer SSDs of all time.

Nearly every dive in the charts today surpasses the 1,000-responsiveness point mark set by the OEM 850 EVO. The Lexar 480GB NM600 scores 1,031 points in the test. This is a strong example of technology progression since both drives are mainstream products. 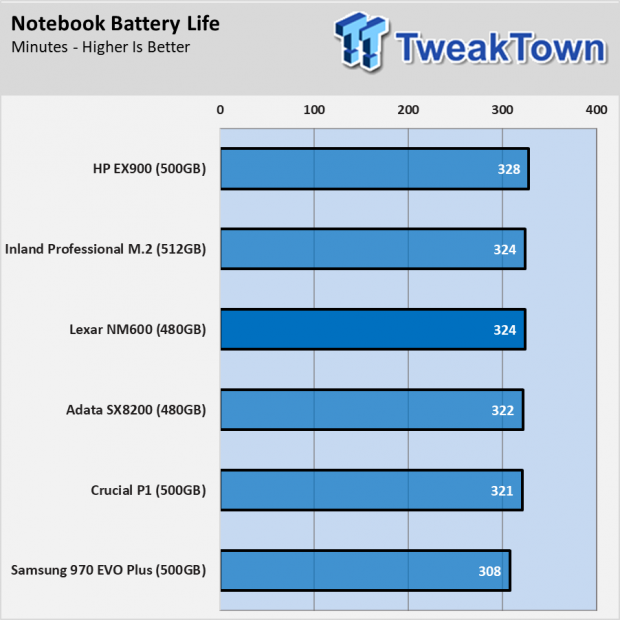 Lexar built a safe, and boring, product for the company's first consumer SSD under this brand. We feel the company could have done more to affect the market. There really isn't a single metric we can point to and say it was a good choice with the NM600 as a flagship model for the brand. 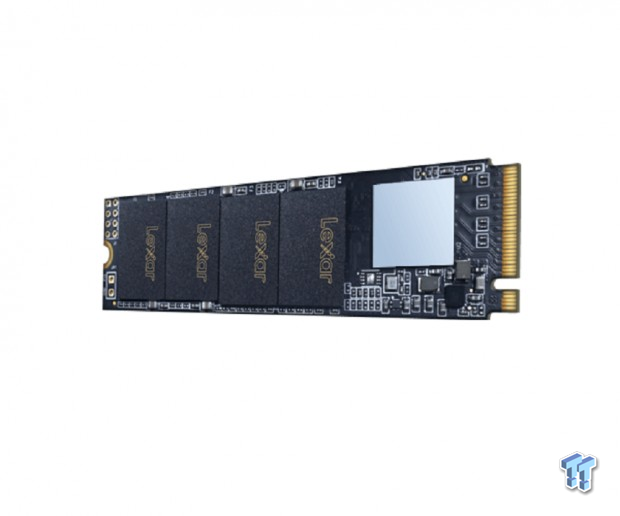 My ego will not let the opportunity pass to tell you what I would have brought to market to make a splash but before that, let's conclude the NM600 review.

At the current price point, the NM600 simply won't have any takers. For one, people may know the Lexar brand but don't associate it with SSDs. You have to build trust and to get early adopters you need a strong price point as bait.

Under Micron's leadership, the Lexar brand, along with everything else under Micron, was conservative. The world doesn't need another conservative SSD company to pump out cookie cutter mainstream SSDs that can only fall back on pricing to be competitive. When that product costs nearly twice what it should we really don't have to say too much more about it.

Lexar's first consumer SSD could have been much better. The company is clearly working with Silicon Motion, Inc. already because the SM2263XT powers the NM600. Lexar should have brought a drive to market with the 8-channel SM2262EN, the same controller powering the HP EX950, ADATA SX8200 Pro, and upcoming Mushkin Pilot-E.

Such a product wouldn't have been an exclusive design, but it would be one of the fastest consumer SSDs shipping today. To stand out from the other SM2262EN products, Lexar could have given shoppers a 10-year warranty, used aggressive pricing. I would have combined tactics and delivered a flagship with a standard SM2262EN 5-year warranty but allowed users to sign up for a free 5-year non-transferable extension and those that do get a free NVMe heat sink in the mail.

Too little, too early? The Lexar NM600 doesn't bring anything new to the market and in fact this hardware combination is a year too late.