Since looking at the 1TB HP EX950 last month, we tested two other next-generation NVMe SSDs from Western Digital and Samsung. The three drives join a growing list of high-performance products new for 2019. Today we look at the 2TB capacity, but before you turn the page, we can declare this is the best 2TB NVMe SSD available today. 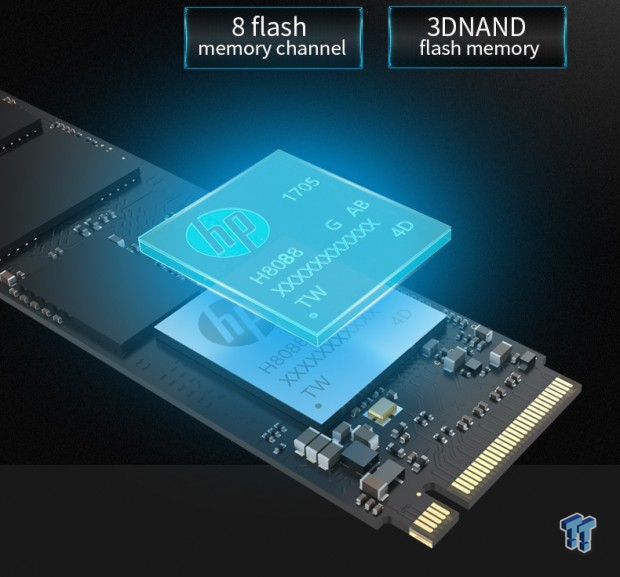 The 2TB EX950 doesn't have to do much to gain high praise at this time. MyDigitalSSD shipped the 1.92TB drive but only in limited volume. The largest capacity quickly sold out, but that's not as bad as the competitors that have yet to ship 2TB models. HP not only announced the 2TB EX950, but you can also actually buy one today at Newegg and Amazon for $399.

HP targets gamers and enthusiasts with the EX series. Unlike the EX920 that became popular in 2018, the successor skips the 256GB model and replaces it on the other end with a massive 2TB capacity.

The performance across the range is very close in applications, but the specifications show some variation at the peaks. The 2TB model we're testing today sports 3,500 MB/s sequential read and 2,900 MB/s sequential write speeds. The random performance reaches up to 410,000 IOPS read and 380,000 IOPS write. These "on paper" numbers come up short to Samsung's 970 EVO Plus, but in our review with 1TB models, the EX950 came out on top in most consumer-focused tests.

The performance increase over the EX920 comes from the new Silicon Motion, Inc. (SMI) SM2262EN controller. This is the high-performance version of the SM2262. SMI optimized the data path with the new controller to increase data writes, but we also see some improvements in our testing with data reads. The EX950 uses the same 64L Micron 3-bit per cell memory as the EX920.

The EX950 series just came to market and pricing hasn't changed from the MSRPs set by HP. The 2TB model sells for $399 and is the lowest priced 2TB class NVMe SSD we've tested thus far. The 1TB model sells for $229 and the 512GB model for just $119. We found all capacities at both Amazon and Newegg.

The series carries a limited 5-year warranty matching all other premium NVMe SSDs. The endurance is slightly better than Samsung's 970 EVO and EVO Plus series. The 2TB model brings a 1,400 TBW rating and the 1TB carries 650 TBW. The 512GB model delivers 320 TBW or guaranteed (warranty) data writes to the flash. 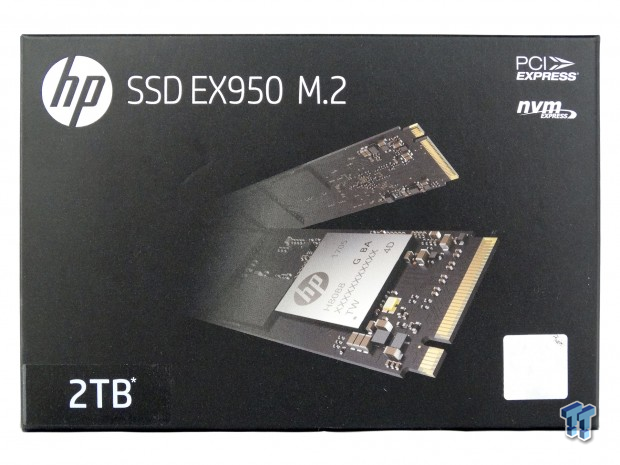 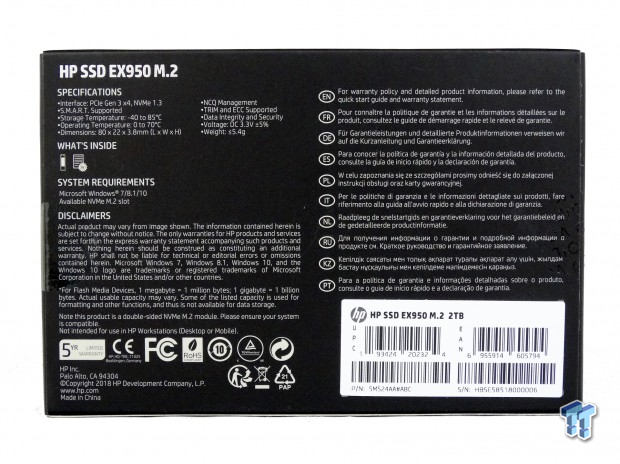 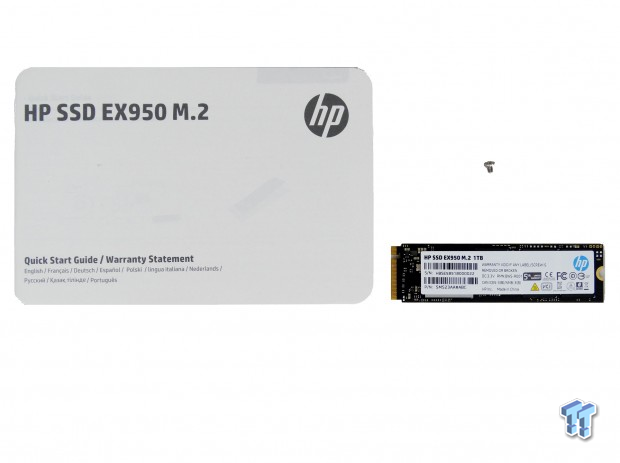 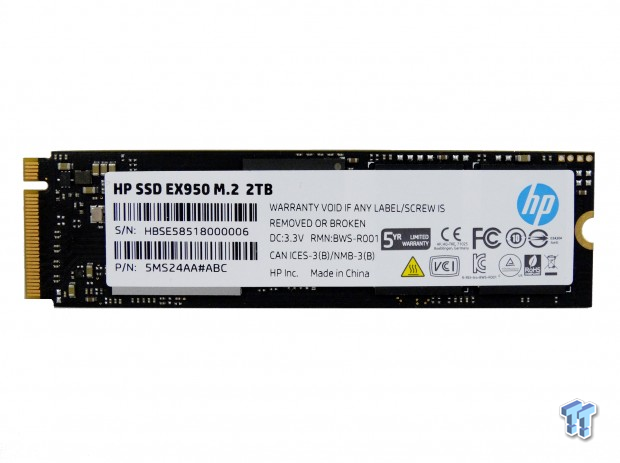 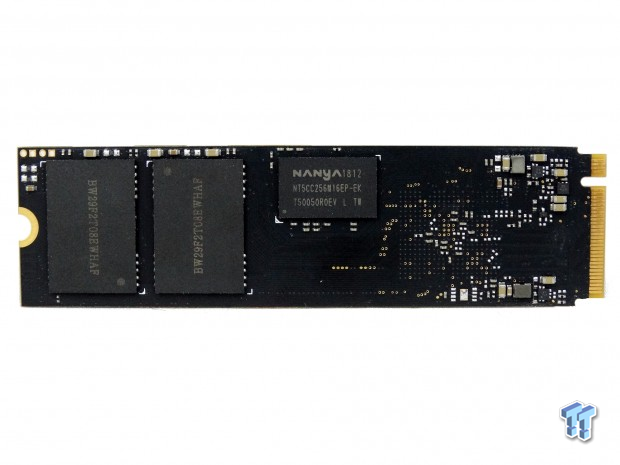 The EX950 uses a doubled sided M.2 2280 design. HP included a fine thread screw with the EX950, the same type used for most M.2 installs. It's always nice to have an extra since the screws are so small and easily lost in carpet should you drop it. 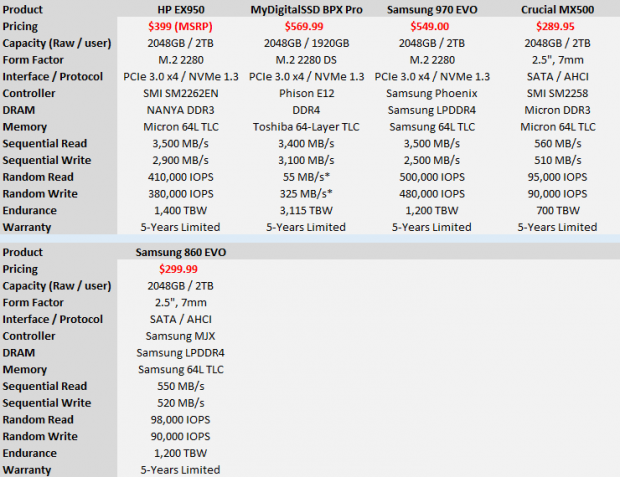 With so few consumer 2TB NVMe SSDs shipping, we reached into a shoebox of SATA SSDs to find more large capacity drive to compare to the new HP EX950.

The charts include the MyDigitalSSD BPX Pro and Samsung 970 EVO, both in 2TB. The BPX Pro is one of the new for 2019 SSDs, but the Samsung 970 EVO Plus just replaced the 970 EVO. The 2TB EVO Plus should ship soon.

We also included the Crucial MX500 and Samsung 860 EVO, also in 2TB capacities. These are the two most popular SATA SSDs shipping today and the fastest for consumer workloads. To our surprise, we didn't have a 2TB 860 Pro in the box. 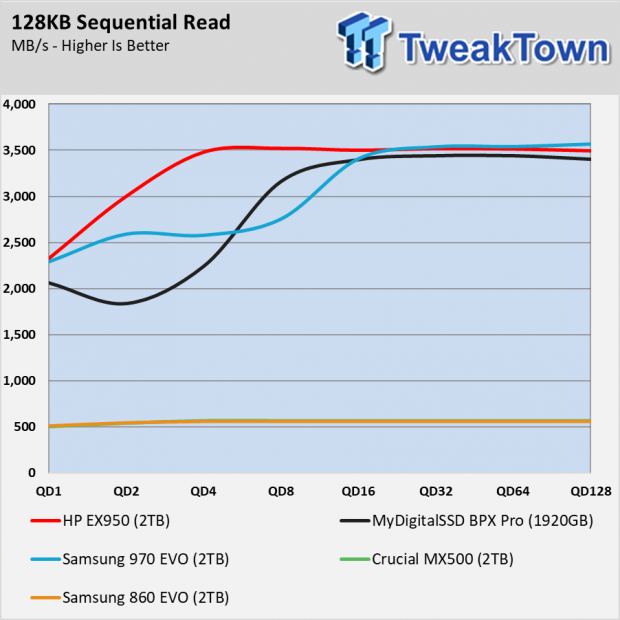 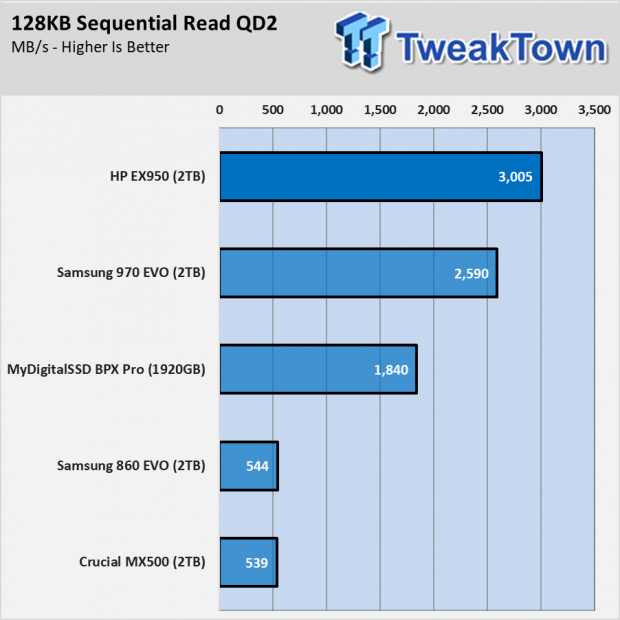 The NVMe SSDs show massive sequential performance gains over the SATA SSDs. The 2TB HP EX950 shows strong performance across the queue depth (QD) range and matches the Samsung 970 EVO in QD1 performance. The MyDigitalSSD BPX Pro shows an odd dip at QD2 and QD4 in our scripted test, but with other testing tools, the drive doesn't show the same behavior. 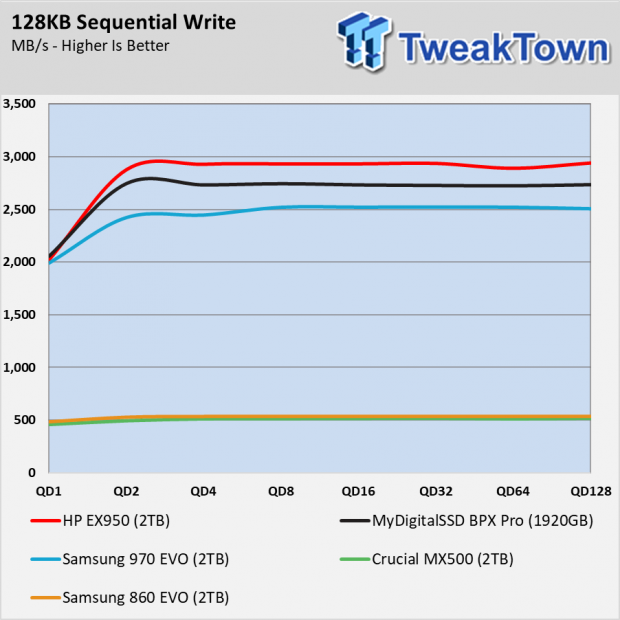 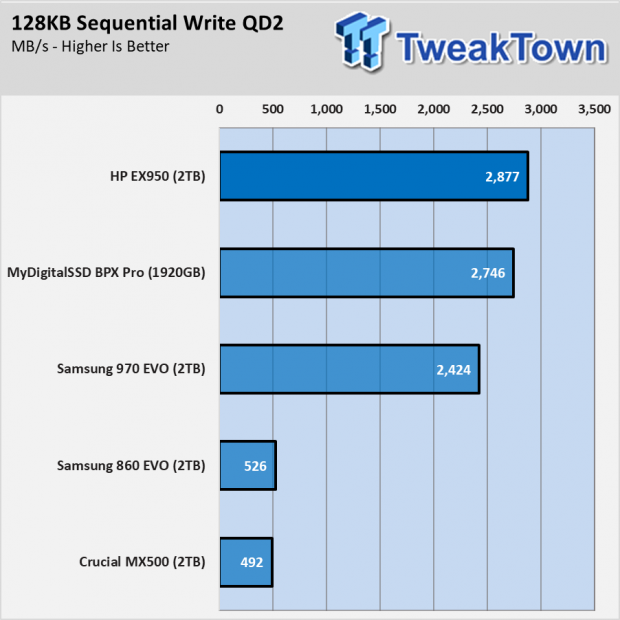 The EX950 pushes past all the other 2TB drives in the sequential write test using burst data. The three NVMe SSDs show nearly identical performance at QD1 and the two next generation drives leave the recently replaced 970 EVO behind as we ramp up the workload through queue depth scaling. 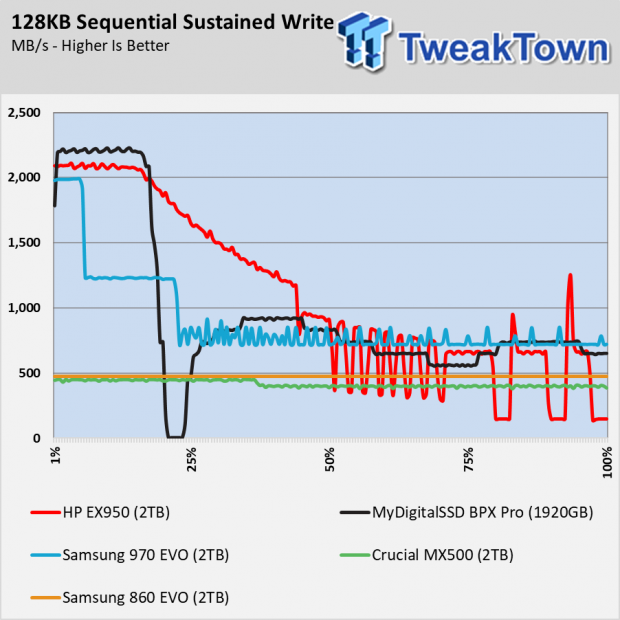 The 2TB EX950 doesn't have a hard cliff when you write large amounts of sequential data to the drive. The new SM2262EN controller improved the cache and data flow through the controller, but this is quite a bit different from the 1TB model we tested last month. 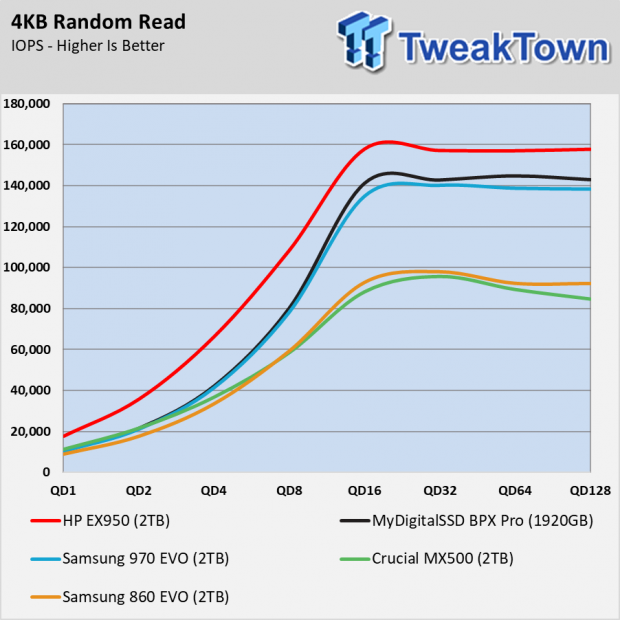 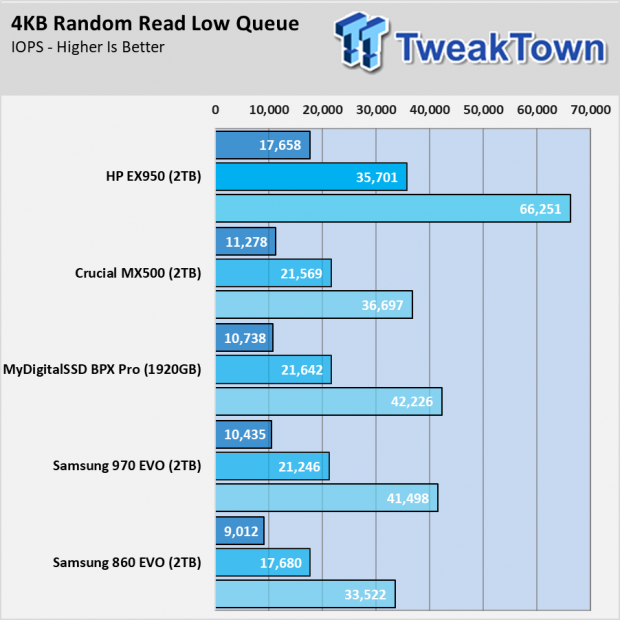 We didn't mention it at the top of the page but had another motive for pulling in the two best SATA SSDs shipping today. We see in discussion forums and other places online where readers dismiss NVMe or say after the move to this technology they don't see a large improvement over SATA SSDs. If you look closely at the second chart, you will see the really good SATA drives deliver strong random read performance that is very close to the other NVMe drives.

The Crucial MX500 even delivers more QD1 random read performance than the BPX Pro and 970 EVO. This is why so many people make the move to NVMe and feel disappointed. In some cases, it's a lateral in performance or even a small downgrade. The HP EX950 is different. This drive is a true upgrade over SATA where it's important. On the next page with applications, you can see the difference in load times and overall application performance. 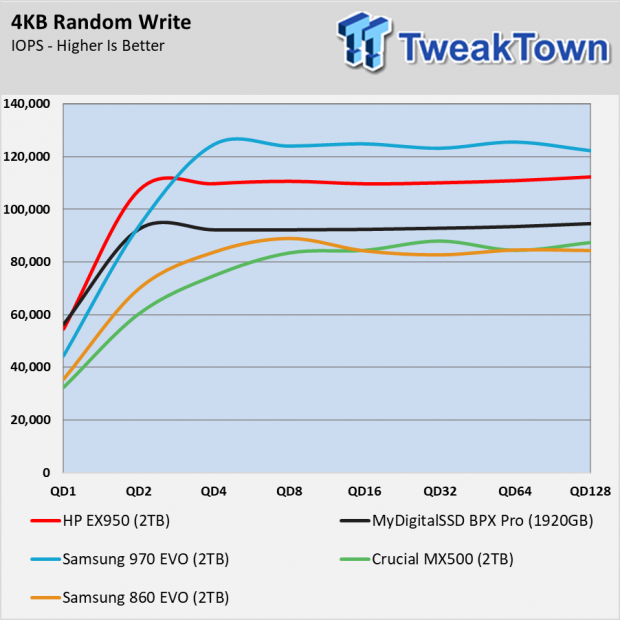 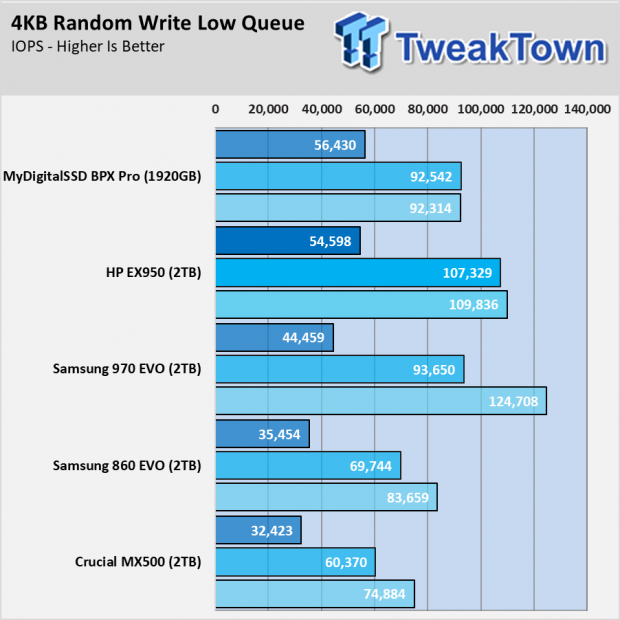 The EX950 doesn't win the random write test benchmarks at high queue depths, but it is significantly better than the Samsung 970 EVO at QD1. The SLC cache on all of these SSDs is so fast that it's very difficult to reach queue depths higher than 1 or 2 even with heavy multitasking. At QD1, the EX950 and other next-gen NVMe SSDs have an advantage over the drives that came to market in 2018. 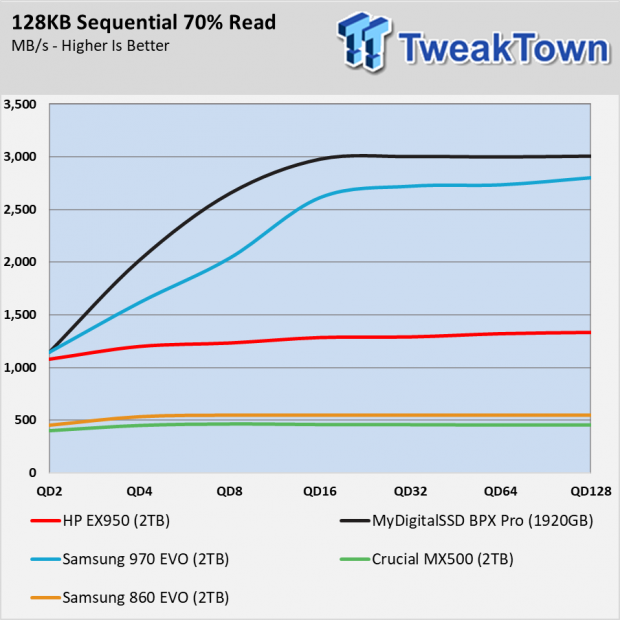 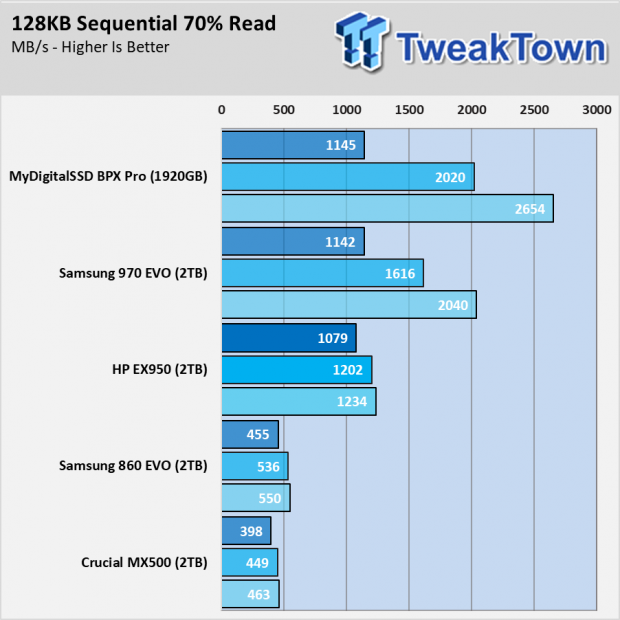 The new controller in the EX950 does have a weakness. Sequential mixed workloads are the kryptonite to this Superman SSD. The performance never drops below 1,000 MB/s, and that is twice the performance of the SATA SSDs, so it's not a Superman slayer by any means. 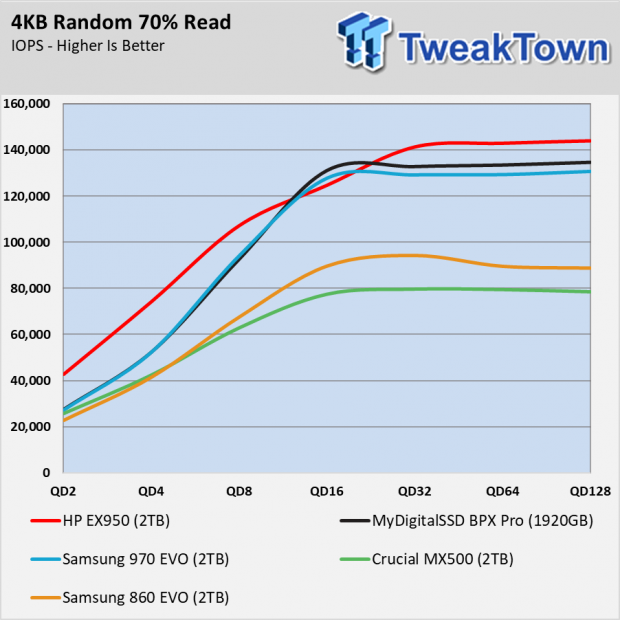 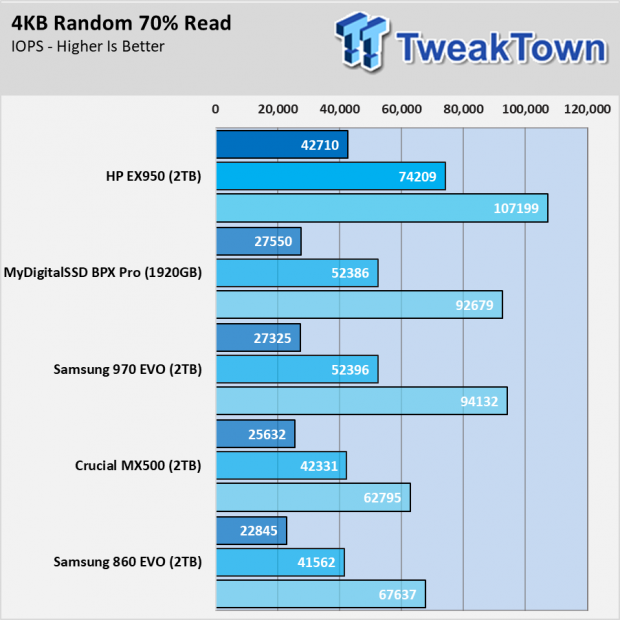 The EX950 doesn't have an issue with random mixed workload performance. The drive powers past the other and nearly doubles the QD2 performance the other drives. This is in part, due to the new data flow in the SM2262EN controller. 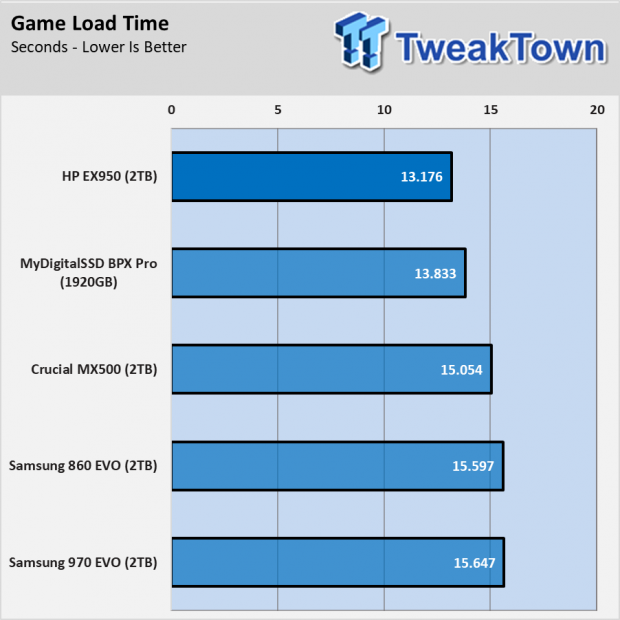 On the previous page, we looked at synthetic performance to understand how each drive reacts to different types of data and workloads. On this page, we test with applications (or several at the same time) to see the true performance.

The 2TB HP EX950's superior random read, write, and mixed workload performance allows the drive to load the Final Fantasy: Stormblood levels faster than the other drives on the charts today. The two next-gen NVMe SSDs break into the 13-second range while the other drives all fall in the 15-second range. 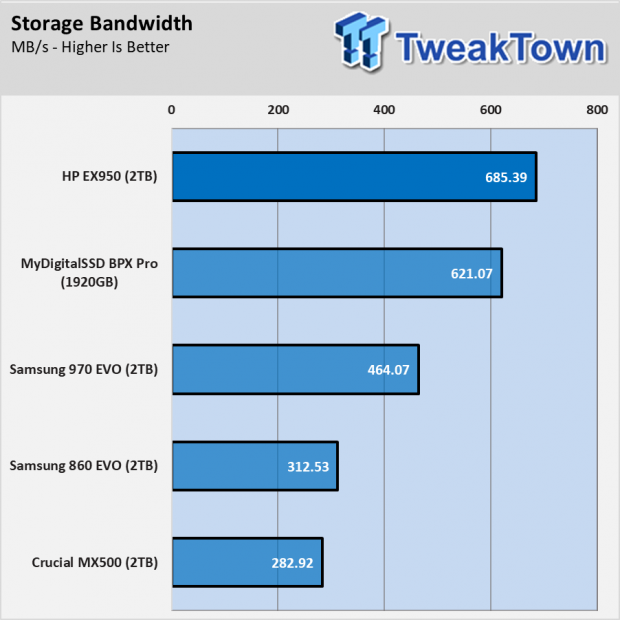 The PCMark 8 Storage Test uses nine common applications to run through ten tests that cover a broad range of consumer tasks like Word, Excel, Photoshop and so on. The applications use the four corners, random, sequential, small and large block sizes.

The HP EX950 delivers more than a 2x performance increase in throughput over the SATA SSDs and surpasses the two NVMe drives with ease. The BPX Pro, the only other next-gen NVMe drive in the test follows closely behind though. 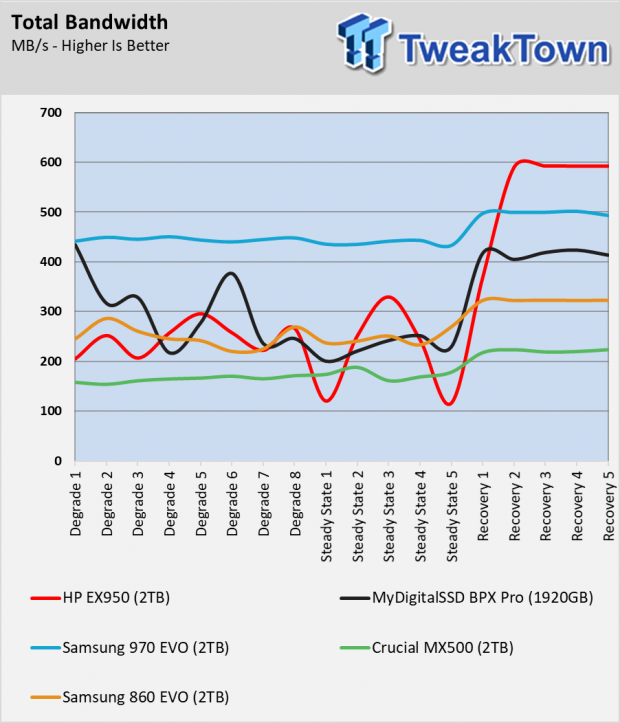 The PCMark 8 Extended Storage Test uses the same applications as the Standard Test but preconditions the drives, and runs the applications much closer together. In the Recovery Phases, the test uses a 5-minute idle time to pause the workloads. This gives the drives time to perform background garbage collection.

Under heavy use in the Degrade and Steady State phases, the 2TB HP EX950 trails the Samsung 970 EVO and mixes in with the other drives. With idle time in place to allow the drives to recover, the EX950 quickly shoots to the top of the performance range. This drive wasn't designed for workstation workloads, and that's clear in the more stressful areas of the chart. It is an excellent NVMe SSD for consumer workloads. 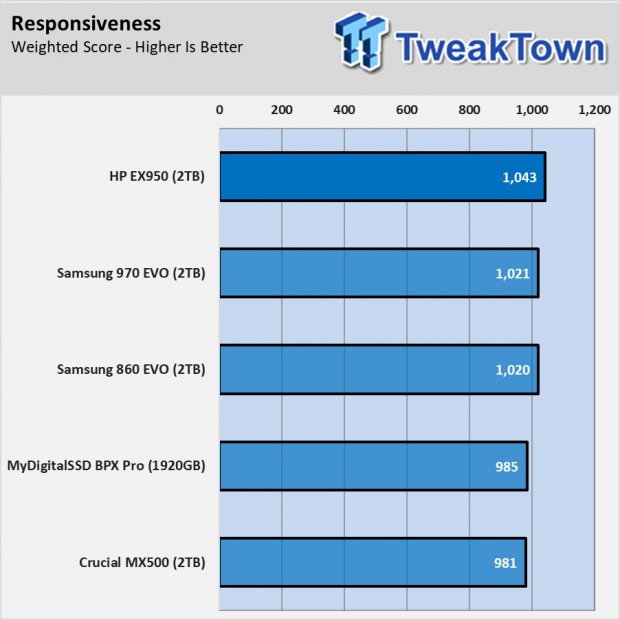 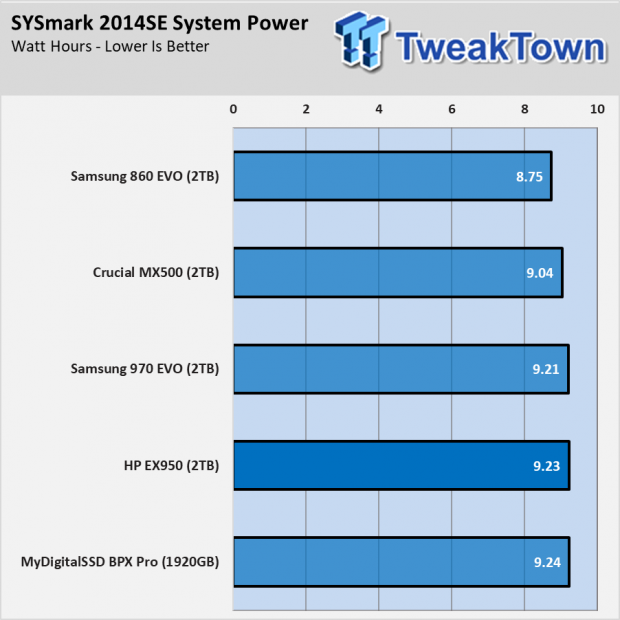 The Responsiveness Test comes from BAPCo's SYSmark 2014 SE suite and mimics a typical day of office work. The base score of 1,000 comes from an OEM version of the Samsung 850 EVO, a strong SSD for latency to start with.

The previous generation HP EX series outperformed every other NVMe SSD in 2018 and the new EX950 looks to do the same in 2019. With so few next-gen 2TB drives shipping today, we can't certify the EX950 as the best 2TB drive, but we can say it's the best we've tested so far. 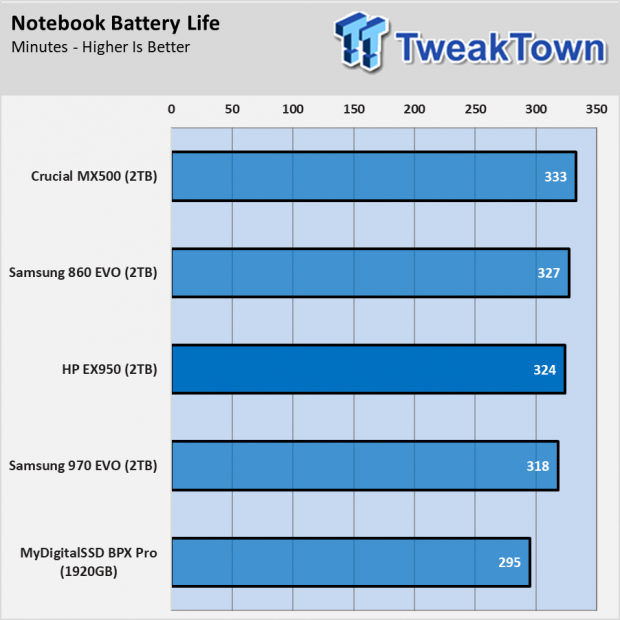 The Notebook Battery Life test comes from BAPCo's MobileMark 2012 suite and uses a similar routine to the SYSmark test. In this version, we use a Lenovo Y700-17 gaming notebook with both SATA and NVMe support. The EX950 delivers 324 minutes of battery life or right around the average for modern SSDs. The drive scores better than the other NVMe drives, but trails the two SATA SSDs.

With so few 2TB NVMe SSDs, shipping, and even fewer new models announced but yet to ship in 2019 we would not jump the gun and say the HP EX950 is the best in this capacity. We can say it's a great SSD and given the 1TB performance we looked at last month, there is a very good chance for this drive to be the best for consumer workloads. 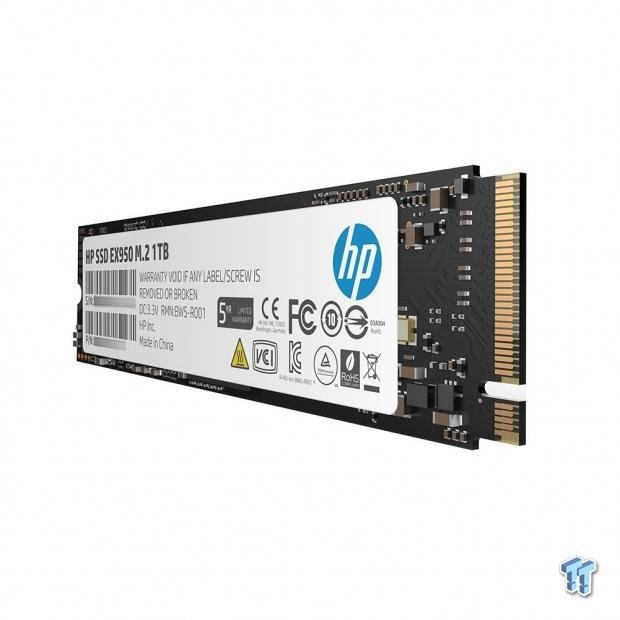 With such a heavy focus on SLC cache, the EX950 isn't a strong choice for workstation workloads. Some may be tempted after seeing the consumer-focused benchmarks and assume this is a Samsung Pro killer. With the previous generation, we saw several videos from YouTube Certified Master SSD Reviewers using Crystal Disk Mark to make the comparison and coming to the wrong conclusion.

For the targeted market, and workloads, the HP EX950 is the best 2TB NVMe SSD shipping today but that's easy to say right now. The only other next-gen NVMe SSD we could show in the charts today is the MyDigitalSSD BPX Pro. The drive started shipping at the tail end of 2018 but is out of stock now. The ADATA SX8200 Pro, Samsung 970 EVO Plus, Mushkin Pilot-E, and other 2TB drives have yet to hit Amazon and Newegg, but we expect them soon.

The lack of competition means HP won't have a need to reduce the $399 selling price anytime soon. The price is very aggressive where it sits today. When the 2TB BPX Pro sold out, it shipped for $569.99 from Amazon. Retail pricing dropped quite a bit since then for all capacities. The 2TB Samsung 970 EVO currently sits at $549.99, but when we tested the BPX Pro, the EVO sat at $590.99. The 2TB HP EX950 might be the fastest NVMe SSD in this capacity, and it's also one of the lowest priced at the time of writing.

The Bottom Line: The 2TB HP EX950 has everything we could ask for from a consumer NVMe SSD. The drive delivers class leading performance and costs less than other 2TB models shipping today.