Razer is no stranger to wireless networking, in mid-2017 they teamed up with Ignition Design Labs to create the Portal Mesh system. This was an AC2400 class platform that took advantage of DFS channels dubbed ZWDFS or FastLanes as Razer calls them, to push past typical network congestion in heavily populated areas. 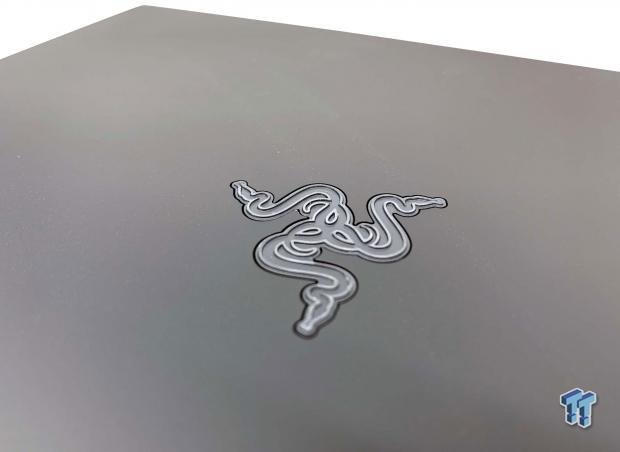 That technology has seemingly made its way into their second wireless router platform, Sila. This new platform is an AC3000 class solution, again with mesh technology built in offering 400Mbps on the 2.4GHz band, 867Mbps on the 5GHz band and dedicated 1733Mbps band for backhaul between mesh nodes. Additional technology includes MU-MIMO, 256QAM, and Bluetooth.

At the heart of this new platform is the Qualcomm IPQ4019, a four core 700MHz SoC that includes a 2:2 radio and ethernet controller which is then paired to the 8075 Switch and secondary QCA8075 4:4 Radio. Memory comes in at 512MB while flash is 256MB. As mentioned, Razer is still pushing additional DFS channels with this new platform along with new FasTrack Engine for gaming prioritization. 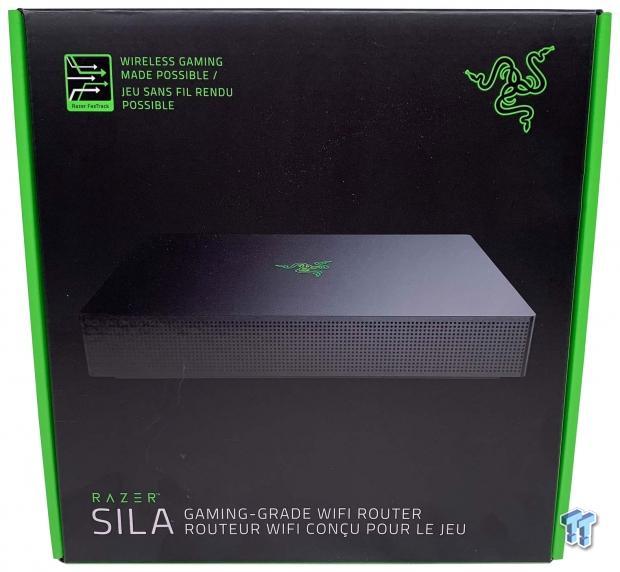 Packaging for the Sila follows the green/black colorway we all know. On the front, we have an image of the router along with branding and mention of their FasTrack technology. 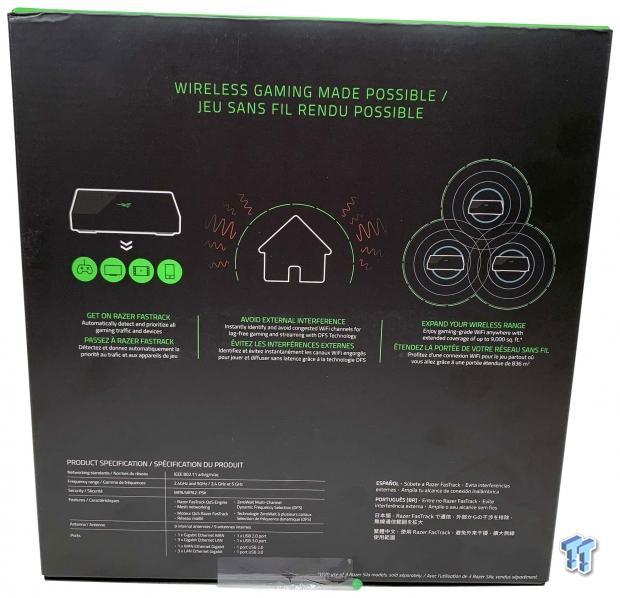 On the backside, we have a few features outlined including FasTrack, DFS and Mesh Technology. Along the bottom, we have a vague product specifications list that doesn't seem to mention the actual performance of each band but rather that it has 2.4 and 5GHz bands. 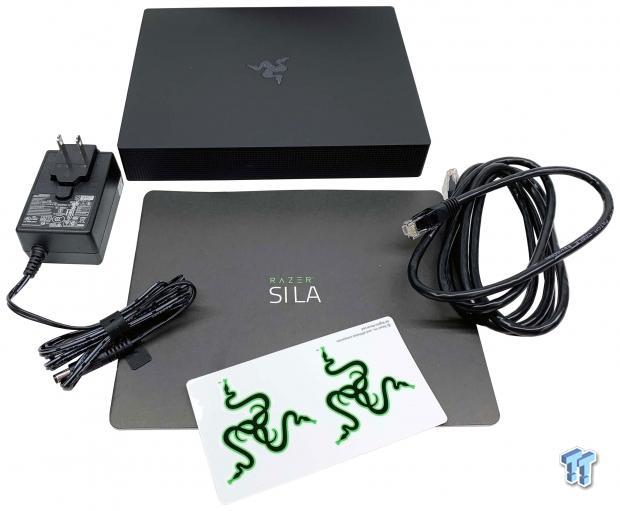 The scope of delivery gets the full compliments of Razer with power adapter, ethernet cable, and reading materials. We also received the obligatory stickers.

The Sila is perhaps the cleanest 802.11ac platform I have had in my hands. The matte black colorway is fantastic while the router takes advantage of soft-touch plastics and venting around the circumference of the chassis.

On the backside, we have power input along with three ethernets and single WAN to the right we have one USB 2.0 and USB 3.0 in green.

The top of the router offers the Razer logo that doubles as a status indicator during setup.

The Sila does operate off its own branded app from Razer. We are using the iPhoneX for this review.

To begin, we tap set up, create a Razer account, get the hardware unpacked and plugged in.

As mentioned, the Razer logo on the top of the router is a status indicator. To continue setup we are waiting for a blue blinking light.

The Sila does appear to use Bluetooth to run through setup, seen above the router has been found, we now setup details.

Setup details allow you to choose your SSID and password, by default Razer uses one SSId for both bands.

The dashboard is broken down into sections with Internet settings at the top, Sila settings in the middle and device list to the right.

Settings include SSID, password and the ability to enable or disable the WebGUI. Down below you can separate the bands, turn on beamforming or enable compatibility mode for legacy devices.

The router does include its own speed test along with a real-time traffic analyzer as part of its prioritization platform. Seen above, the router is able to show traffic coming through by platform and device along with a total traffic meter above.

Taking things further, you can customize traffic priority by type and then assign types to devices.

Last, we have traffic management that allows us to enable or disable FasTrack and Gaming mode. Down below, while in gaming mode, you can set your ISP performance settings accordingly using the built-in speed test. 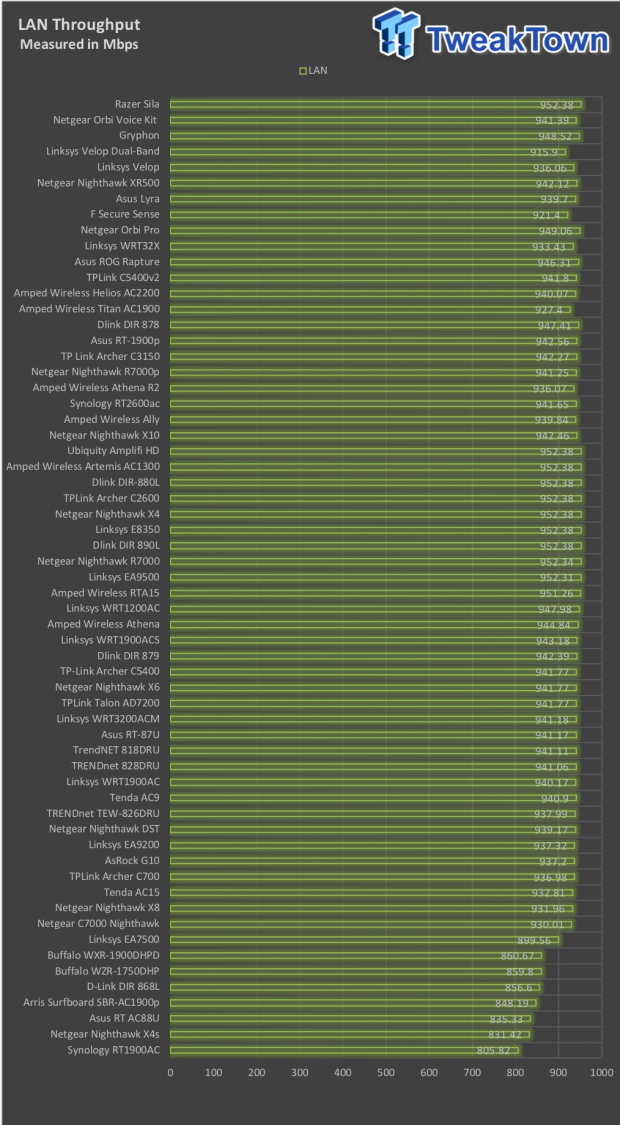 We start off with wired performance with Sila. As expected, results came in at 952.38 giving the Sila a solid start to testing. 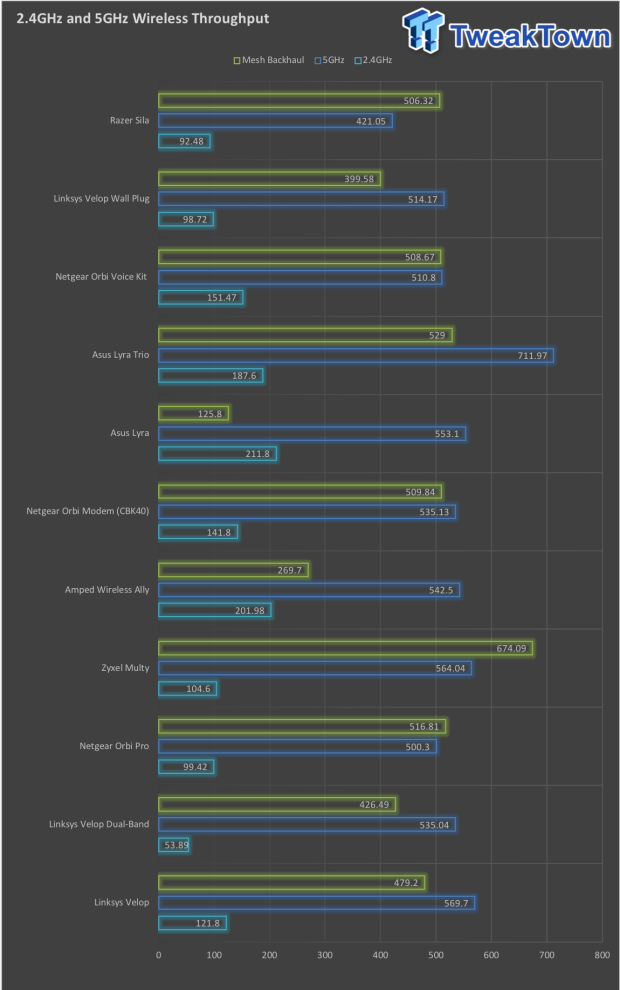 Next up, we moved into wireless throughput testing. This testing is done at 15ft from the router with our test platform above. The Sila was able to bring in 98Mbps with the 2.4GHz band, on par with expectations. The 5GHz band came in at 421Mbps, just below average for Mesh platforms tested while the backhaul was fantastic at 506Mbps, average for platforms tested. 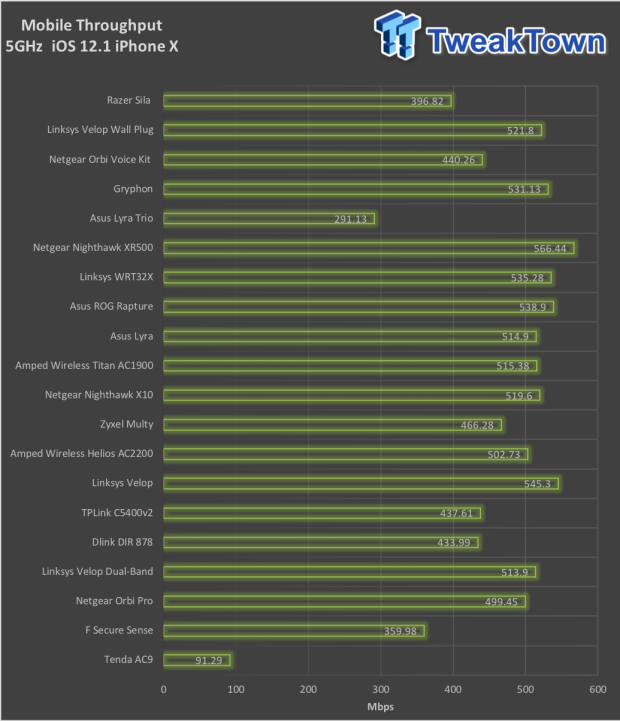 We then ran performance testing through our mobile device, to see how the Sila interacts. With that, we found 396Mbps with our iPhoneX.

I have had the Sila since November, for a large portion of this time I have used the Sila as my main home router. This allows me to get a good feel on how it operates day to day in streaming, gaming along with troubleshooting any issues that come up. I'll start by saying I absolutely love the aesthetic of the Sila. The matte black colorway is fantastic and having the antennas internal only add to this minimalist feel of this platform. The Razer logo on top glows green at a medium level that's not to bright even at night.

As far as performance goes the Sila performs the same as any 2:2 Radio mesh platform. Evidence of this is in the testing results, nearly all modern mesh platforms are 2:2 with 400 on 2.4GHz and 867Mbps on the 5GHz. Where the Sila sets itself apart is the fantastic backhaul using a separate 4:4 radio, similar to Orbi. That said, in testing 2.4GHz was below average at 98Mbps and the same can be said for the 5GHz band, reaching only 421MBps. With that the backhaul was strong enough for full Wi-Fi throughput at 506Mbps.

A large part of the mesh platform is the software. Now with the Sila you have two options. Use the mobile app for your device or enable the Web UI during setup and use it. I chose to use the iOS app and with that went through setup without issue. After setup I did find the app to be basic with controls for SSID, Traffic Management and a few others. Notably, Sila doesn't allow you to manually configure your Wi-Fi channels, instead you are pushed into using their Zero Wait DFS technology, the main feature that sets this router apart from all others. That said, you can separate bands for legacy devices or go further into compatibility options along with configuring prioritization features.

As mentioned in the beginning, the Razer Sila carries an MSRP of $249.99 with one-year warranty. This puts it at the higher-end of AC3000 Class platforms, as a two-node system will cost you $500 USD. As a comparison you can get an Orbi RBK50 for $329.99 two nodes included.

The Bottom Line: The Sila is easily the best looking router of 2018. That said, looks don't equal performance and the Sila could use a few firmware updates to iron things out.